After the Window Solar Charger proved to provide a big increase of availability of portable solar chargers, its creators XD Design presented an updated version called the Port Solar Charger.

The new Port Solar Charger deals with the minor niggles its older brother had and brings a change in styling. It is round and its body is made of quality plastics with the dimensions of 3.3 x 0.7 inches and the weight of 3.0 oz. It also has a suction cap which keeps it firmly connected to the window, which is a lot better option than the silicone ring the Window Solar Charger used.

The other side of the Port Solar Charger sports a button followed by 5 LED lights. One of them is green and the others are blue. The green light is on when the device is charging. The blue lights serve as a gauge that indicates the remaining charge. Also you can find the USB charging cable which neatly folds into the body when not in use.

Just like any other device with a suction cap, the Port Solar Charger effectively avoids any shadows and stays firmly secured on the glass.

As for its performance, the Port Solar Charger takes two hours to charge fully via USB and 20 hours via PV on a bright day and more if the sunlight is scarce. However, the internal battery does have its limitations. It has the capacity of 1,000 mAh, which means that only some devices will be fully charged, while most modern ones, such as vast majority of smartphones, will benefit from the Port Solar Charger only in terms of emergency top-up. Still a 1,000 mAh top-up is a pretty useful feature. [via] 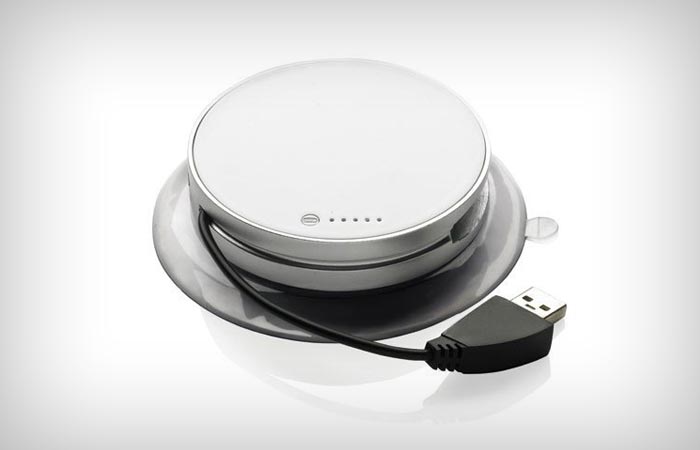