It all starts with Elliot Alderson. Elliot is a complex character. An introvert with a skill to hack almost everyone, a morphine lover with a social disorder, a virtual vigilante with a sense of justice.  And most of all, the star of Sam Esmail’s and USA Networks new hacker psychological drama – Mr. Robot.

Critics say it’s probably the most realistic hacker’s drama ever made. The team, including Michael Bazzell, Mr. Robot’s technical consultant, made sure it gets as realistic as possible. They paid attention to the smallest details and made sure that every computer code seen on the show is accurate. What is also different about Mr. Robot is that it treats viewers as intelligent beings, able to follow the storyline. 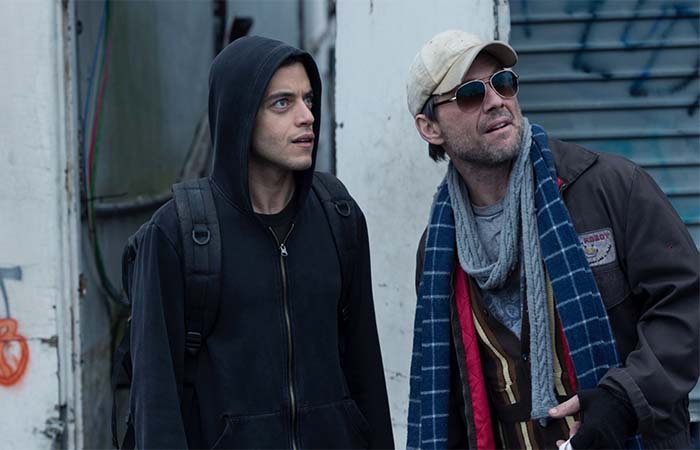 Elliot and Mr. Robot together. [source]

To Elliot (Rami Malek) hacking is a way to implement social justice. It also serves as a coping mechanism and a way to help, or ruin people. The opening scene suggests his desire to seek justice and do what is right. As episodes progress it will be slowly revealed what’s inside his head. Each episode’s name ends with a different video file name extension like .mov,mkv, flv. Also, on their facebook page they respond to almost every single comment with something relevant of what Mr. Robot represents. You can see responses like ‘We must strategically calculate our next move, friend. The time will come’ or ‘The revolution is merely on pause, friend. We are not close to done’. But let’s talk about the story. 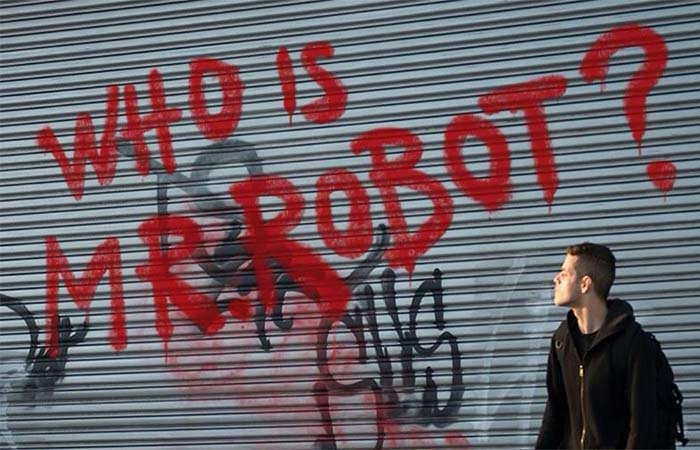 Elliot is an engineer at Allsafe, a cybersecurity company. He’s at the same time functional but delusional and dissociated. Mostly driven by his conscience, Elliot has difficulties maintaining relationships with people around him. In an effort to suppress his emotional pain, he goes to therapy, but what works best for him is actually self-prescribed morphine.

His emotional state quickly gets changed when things at work take a strange turn. Allsafe’s biggest client, a conglomerate E-Corp, gets hacked. But not in a way it gets under the radar, we are talking a big time DDoS attack. While trying to fix the problem, Elliot gets approached by a group of hackers who call themselves Fsociety. It’s then when he is introduced to their leader- Mr. Robot (Christain Slater). Mr. Robot takes Elliot to meet the rest of the crew, and gives him a proposal, to help them bring down the world’s biggest conglomerate- E Corp.

At the same time, Elliot starts developing a strange relationship with E-Corps intimidating and a bit scary VP of Technology- Tyrell Wellick (Martin Wallström). This proposal isn’t something Elliot can throw away easily and it starts affecting every part of his life. He is a kind of guy who is sick with corporate ways, especially sick with E-Corp, or as he calls it Evil Corp. It turns out he has a big reason for that after all.

Check out the official trailer for Mr.Robot: 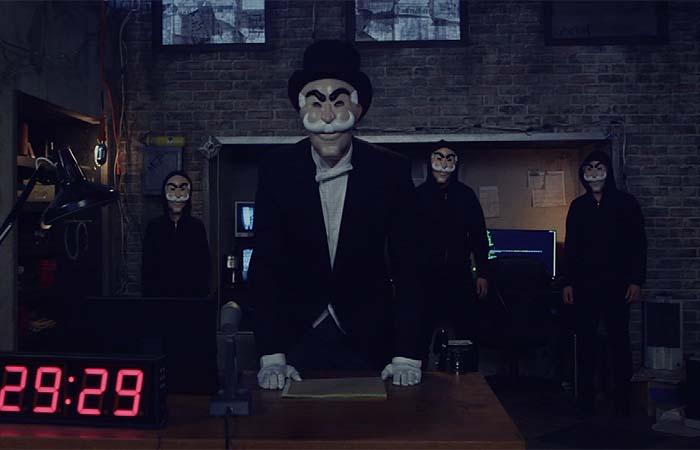 Elliot is introduced to a hackers group called Fsociety. [source]

Fsociety is a group of hackers planning to do what was never done before. They want to hack the biggest conglomerate in the world- E Corp, and ruin its entire financial data. That would mean they would essentially erase everyone’s debt. Fsociety works from an on old amusement park building in Coney Island. The name of the building was actually Fun Society, but the letters fell apart leaving only F Society. They are highly secretive, only meet and talk in person and never use digital means to communicate, they don’t even have cell phone numbers of each other.

Fsociety makes videos to warn E Corp of what will come.  In one of the videos they demand E Corp to “Release all the people in the world from your even more illegitimate prisons of debt. Donate all your assets to charity all around the world. The people are realizing they don’t have freedom of choice as long as you exist, the people are waking up no longer accepting your economic slavery”.

Check out the entire F Society’s message to E-Corp:

The costume worn in the videos is quite interesting. It’s probably made to resemble the Monopoly Man. Monopoly man was first introduced to the world in 1940, but didn’t have a name back then. He was later called Rich Uncle Pennybags. His appearance is inspired by very rich property owners in the early 20th century that would buy and sell property in New York City, what Monopoly the board game is based on. In Mr. Robot it’s probably used as a way to make fun and mock capitalism.

The mask Fsociety uses is very similar to the British Guy Fawkes mask. It was first used in the Gunpowder Plot but became very popular with V for Vendetta. It later became a symbol for  an online group of hackers- Anonymous and used in the Occupy movement, Since Mr. Robot is all about anti-establishment and protest, in the series this mask has a symbolic meaning. 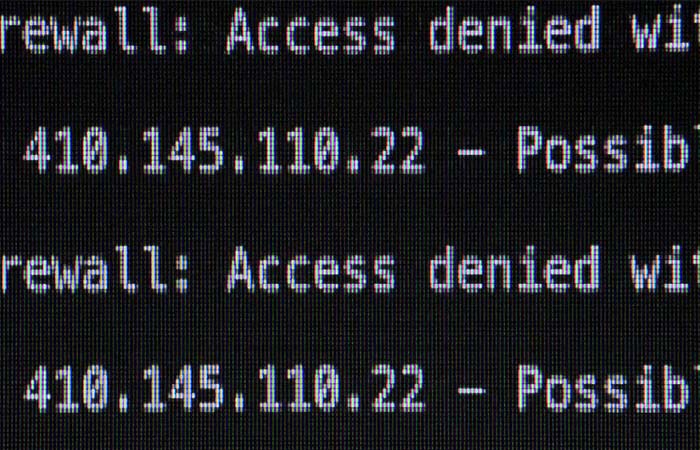 Elliot has to deal with a huge DDoS Attack. [source]

In the series, we are shown what a DDoS attack is. E-Corp suffers one, their servers are down and they are losing a substantial amount of money in revenue. In the end Elliot discovers the attack was based on rootkits, but the importance of DDoS attack in real life and in the story is significant. So, how does it actually work?

DDoS stands for distributed denial of service attack and as the name says, it’s used to make a service unavailable. The attack is sent by a group of people or an army of bots called botnets. They send many requests to the server and it becomes overloaded, resulting in the server failing to provide service. Even average users can help out facilitate DDoS attacks without knowing it. Millions of routers are vulnerable and can be used as bots.

This type of attack is targeted at large businesses, like in the series, or like in real life situations. Massive DDoS attacks happen often, but one of the biggest ones ever was an attack on Spamhaus, a non-profit anti-spam organization in 2013. Even a bigger one happened in 2014 in Hong Kong, a series of DDoS attacks of a remarkable 500 Gbps were used against independent news site Apple Daily and PopVote.  Some of the experts say that in the series the reaction of E-Corp to the attack was very accurate, when trying to describe what major companies do when faced with the attack. 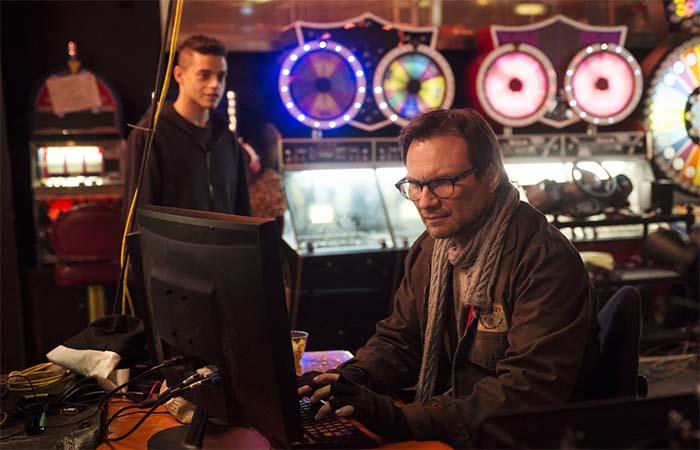 Check out some of the biggest real-life hackers. [source]

Elliot Alderson is just an example of what people can do with the knowledge and skills they have. There are plenty of real life hackers worth of mention, and here are some of them: 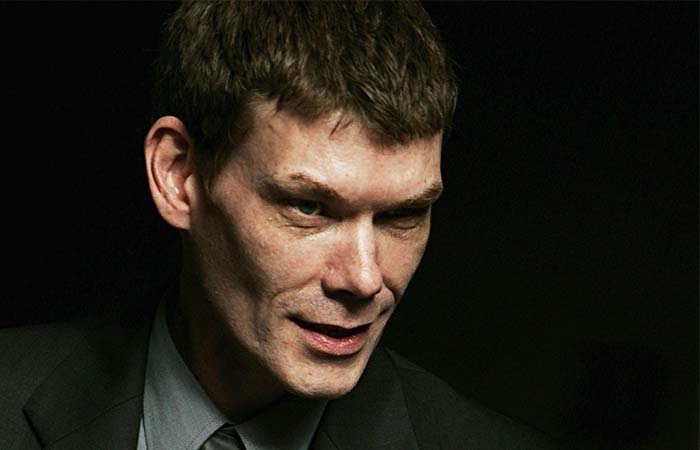 1 – Gary McKinnon, also known as SOLO, was interested in UFOs so he got direct access to NASA and US Military computers. He managed to shut down 2000 US Military computers for 24 hours from his girlfriend’s aunt’s house. This was the biggest military computer hack of all time. He also left a message that said “Your security is crap”. Ten years lasted the battle to save him from being extradited to the U.S. and in 2012 the order for extradition was withdrawn. 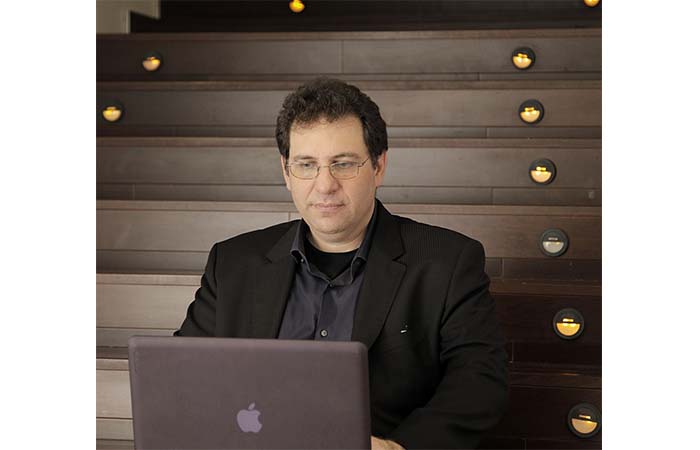 2 – Kevin Mitnick is a person that doesn’t really have the looks of a cyber criminal, but some years ago he was convicted for seven counts of fraud including a wire fraud, computer fraud, and illegal interception of a wire communication. Mitnick hacked different organizations and companies including Nokia, Motorola, and the Pentagon. When the FBI chased him he thought of it as an adventure. After five years spent in prison, he decided to start working as a computer security consultant and he even published a book about his exploits called Ghost in the Wires. 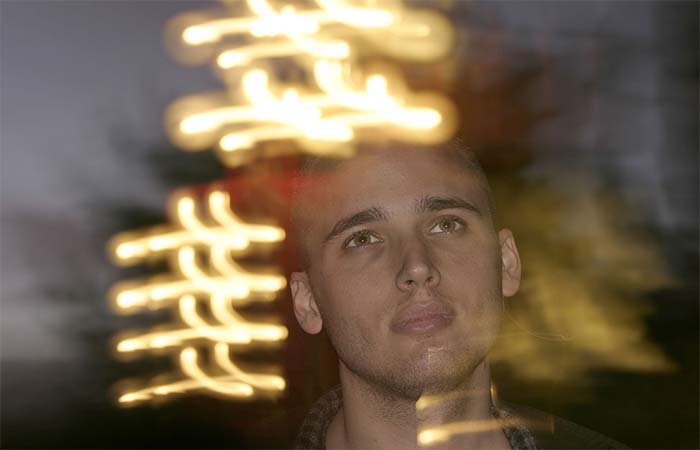 3 – Adrian Lamo in his early 20s already hacked Yahoo!, Microsoft, Google, and The New York Times. But he also used his skills to help the FBI catch Wikileaks suspect Bradley Manning. Lamo was diagnosed with Asperger syndrome, and from 2010 he is ‘in hiding’ claiming his life might be under threat after turning in Manning. 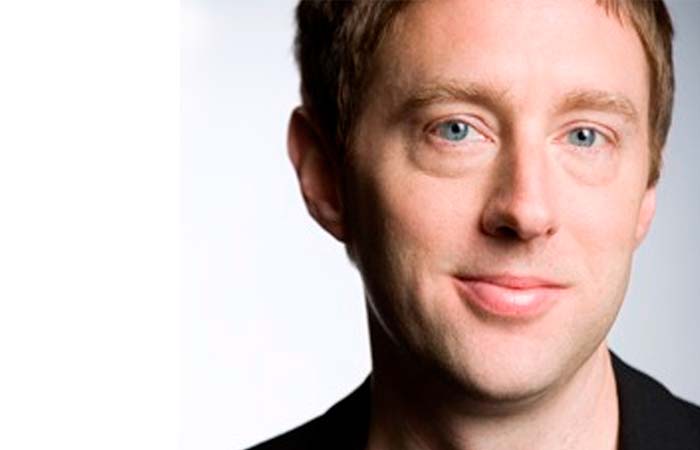 4 – Kevin Poulsen hacked all the telephone lines of an LA radio station in order to win a Porsche in a call-in contest. He was later chased by the FBI, and after going underground, he was caught and served his time in prison. He now works as a senior editor at Wired and he published a book called Kingpin. 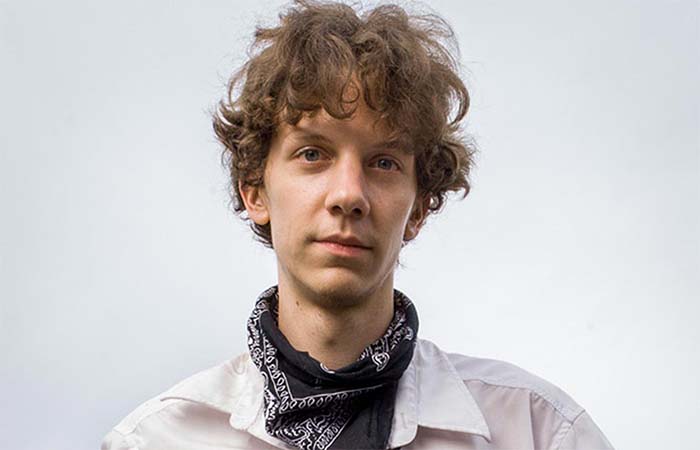 5 – Jeremy Hammond is sometimes referred to as the original Snowden. He hacked the corporate intelligence agency Startfor and leaked around 5 million of the agency’s private emails to WikiLeaks. He was trying to let the world know that the agency takes part in activities like spying on behalf of private corporations. 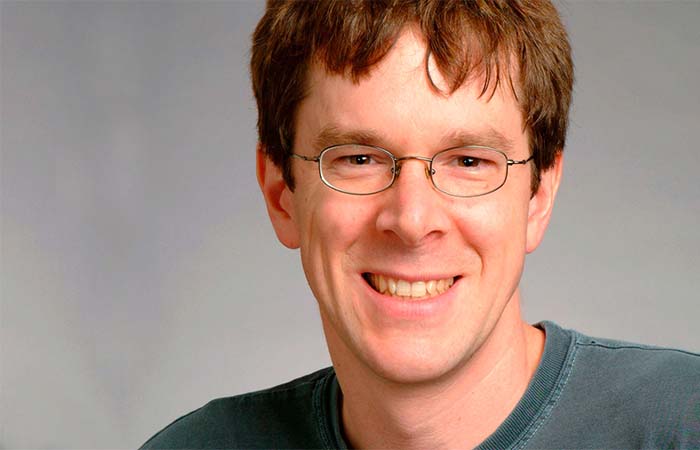 6 – Robert Tappan Morris is a computer scientist that created Morris Worm, the first computer worm.  He was also the first person to be convicted under the Computer Fraud and Abuse Act. Later he became an influential person in the world of computer science. 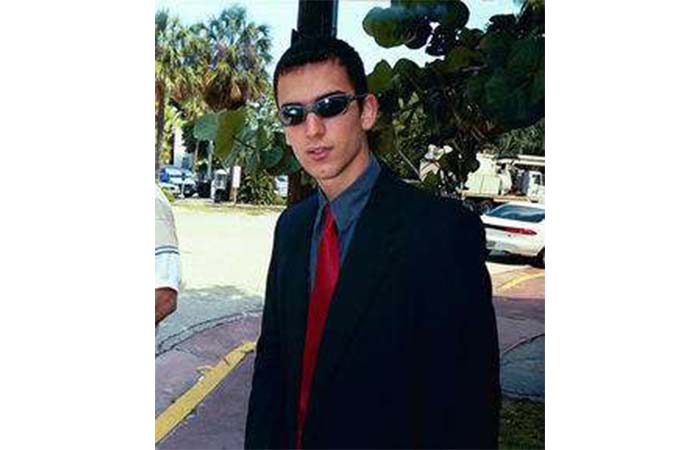 7 – Jonathan James, also known as c0mrade, was just 16 when he hacked the Defense Threat Reduction Agency of US department. He collected passwords and usernames of the employees and even stole an essential software. It cost a lot of money for NASA to shut down its entire system. C0mrade was also the first juvenile to be incarcerated for cybercrime in the US. 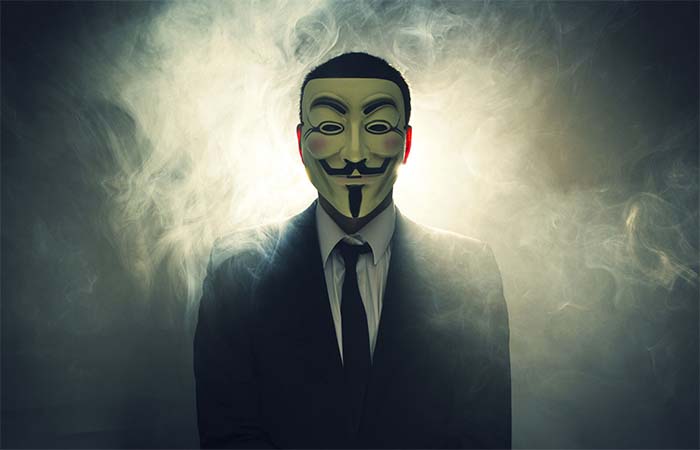 8 – Anonymous is a hacktivist group known for wearing a Guy Fawkes Mask and targeting many government, religious and corporate websites. Among the targets were the Church of Scientology, many government agencies, child pornography sites, PayPal, MasterCard, Visa, Sony. They support WikiLeaks and the Occupy movement. Also, there is some news that Anonymous are planning to reveal 1,000 identities of Ku Klux Klan Members on the first anniversary of the Ferguson protests.

After ISIS claimed responsibility for Paris attacks on November 13th, Anonymous Hackers Group has declared total war against the Islamic State. Anonymous released a video in French announcing the beginning of #OpParis. After around 130 people died, and many were injured in these horrifying attacks, Anonymous stated that “These attacks cannot go unpunished”… “Anonymous from all over the world will hunt you down. You should know that we will find you and we will not let you go. We will launch the biggest operation ever against you”…”Expect massive cyber attacks. War is declared. Get prepared“. Anonymous also made similar threats to ISIS after the Charlie Hebdo attacks in January. They then started publishing a list of Twitter accounts related with Islamic State propaganda. 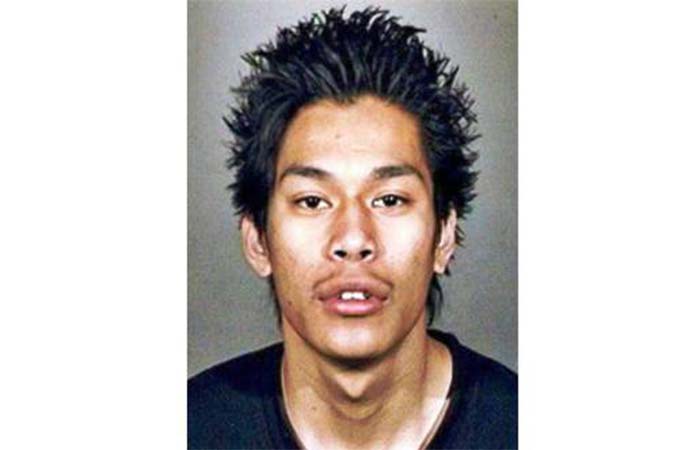 9 – Jeanson James Ancheta, sometimes called The Zombie King, was a high-ranking member of a network of hackers called the “Botmaster Underground.”. He was also the first person to be charged for hijacking computers and controlling a huge army of botnets.

10 – Astra is a 58-year-old greek mathematician that hacked France’s Dassault Group and stole weapons technology data. In the next five years, he sold the information to different countries and around 250 people from all over the world. He is still untraced. 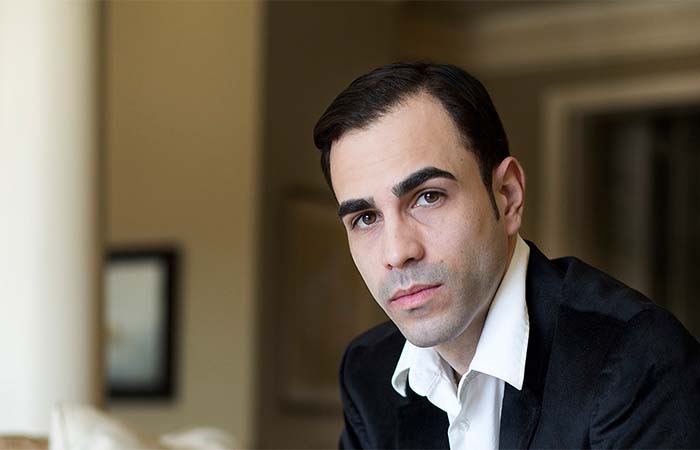 11 – Michael Calce, known as mafiaboy, is responsible for launching DoS attacks on Yahoo, Amazon, Dell, E*TRADE, eBay, and CNN in 2000, when he was only 15 years old. His actions brought up the question of protection of the government and commercial computer systems. He now works as a “white-hat hacker” and help companies with online security. 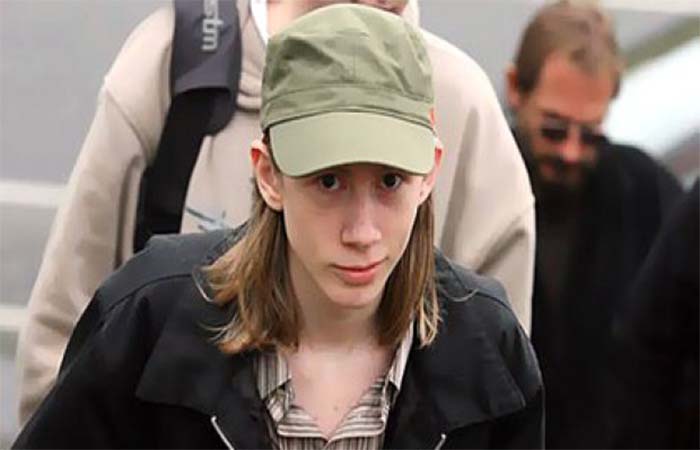 12 – Owen Walker, known as Akill, was under arrest for leading a group responsible for about $26 million worth of damage. His botnet reached around 1.3 million computers. He pleaded guilty but was discharged without conviction. Akill now works as a security consultant.