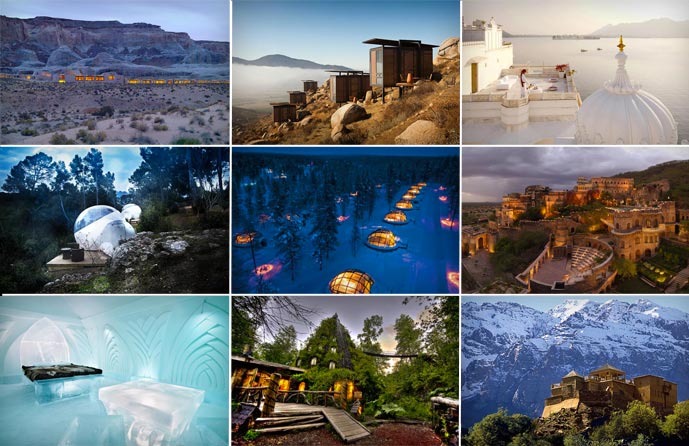 Hotels are usually some of the most generic places in the world, and often you cannot tell them apart. Same architecture, same amenities, same services, same menus….

Do not despair! There are hotels in this world that are so out of ordinary, so whimsical, so unconventional, and so deserving to be on your bucket list of things to do and visit. Some of these hotels might not be over-the-top-five-star resorts, but they deserve to be mentioned for the sheer originality and pizzazz they possess. They are scattered all over the world – from Canada and Bolivia to France and India. Once you see or stay at these hotels, you may never settle for accommodation that is not authentic, zany, and memorable.

Here are our favourite hotels and resorts in the world, in no particular order. 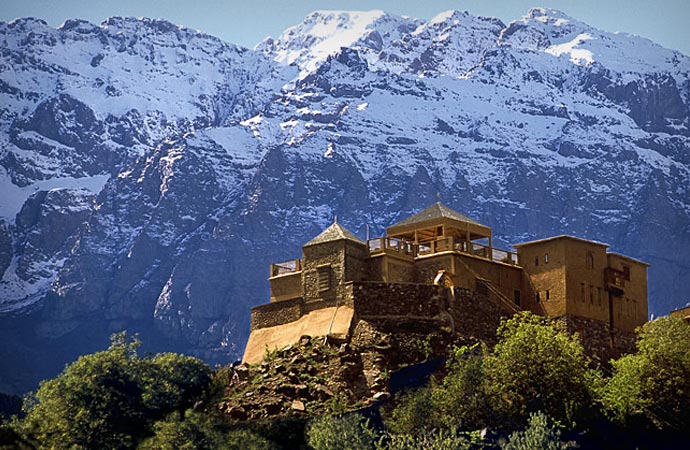 If you are just dying to visit the magnificent Atlas Mountains in Morocco, and are looking for the perfect place to stay, look no further than Kasbah du Toubkal. This luxurious resort is far removed from the hustle and bustle of modern living. The hotel, one of the most peaceful and secluded places you will ever stay in, is the epitome of Moroccan flair, folklore, and tradition. The local Berber team, dressed in babouches (Moroccan slippers) and djelaba (cloak) will take good care of you, making sure that you have a constant supply of mint tea and freshly picked nuts. 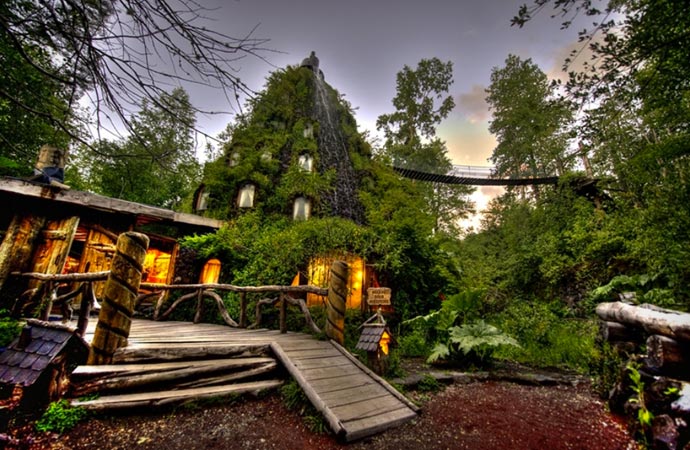 At first glance, you might be fooled into thinking that the Magic Mountain Resort in the Patagonian Andes is the original dwelling place of hobbit Frodo Baggins from ‘The Lord of the Rings’. Although it looks like it was plucked right out of a fairytale, the Magic Mountain is actually an eco-resort set amidst a biological reserve. The hobbit-like accommodation is built entirely out of wood by local craftsmen from Puerto Fuy Neltume, and, although compact, it has everything you need for a comfortable stay including tubs in ancient tree trunks with naturally heated water. 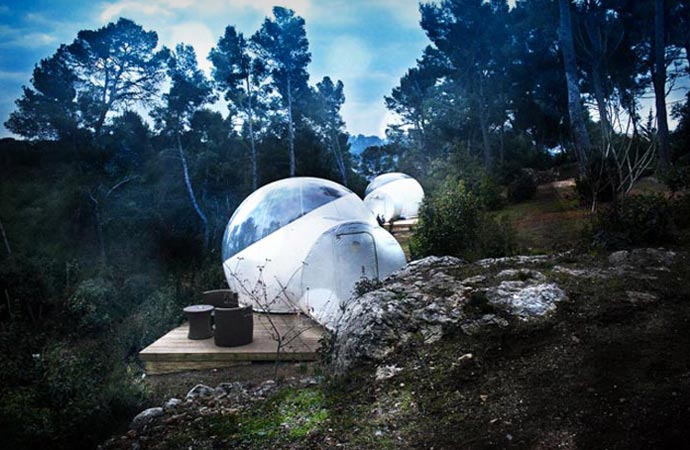 Staying at Attrap Reves is a magical, poetic, and cosmic experience. Instead of a room, you will be accommodated in a transparent bubble from which you can enjoy fantastic views of the forest and the night sky. You will feel as one with nature with rabbits hopping around you, and a telescope at hand for star gazing. There are several bubbles to choose from – Zen, Chic & Design, 1001 Nights, Glamour and Love Nature – and thеy are all decorated to a different theme. 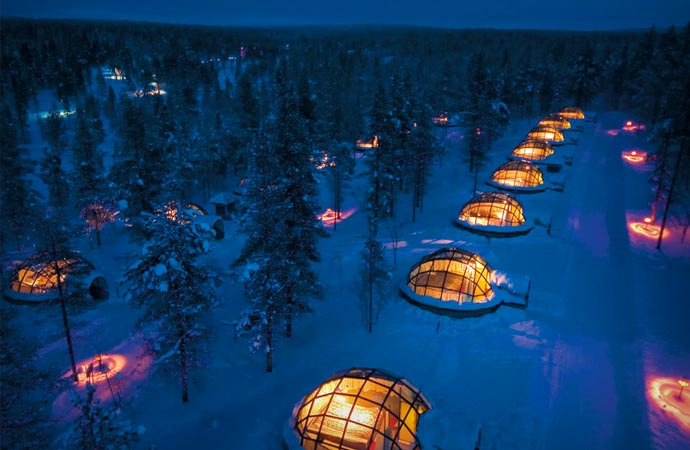 We are pretty sure that the term “winter wonderland” has been invented with the Kakslauttanen Igloo Village in mind. The village is located right up above the Arctic Circle, in the Finnish Lapland. Every December, this is the place where ice sculptors all over the world compete. The village comprises of glass igloos, snow igloos (yes, they are made entirely from snow) and log cabins. In keeping with the Finnish customs, you have to try one of the resort’s saunas, and then, of course, go for a dip in an ice hole nearby. 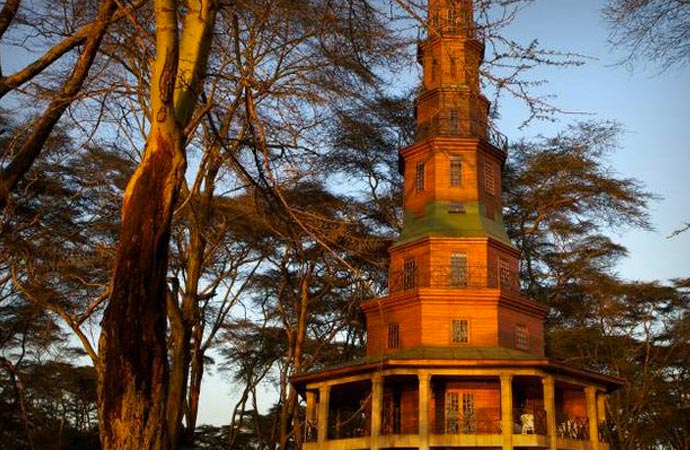 The Hippo Point has been consistently voted the top wildlife retreat in the world, and Dodo’s Tower the best vantage point for spectacular bird’s-eye views of the hippos, giraffes, zebras, and other wildlife. This eight-story tower was built by Dodo Cunningham-Reid and can sleep up to nine people. Dodo’s Tower is not a hotel. It is a very private, special place where you will feel like a king or queen with your own castle in the middle of Africa. 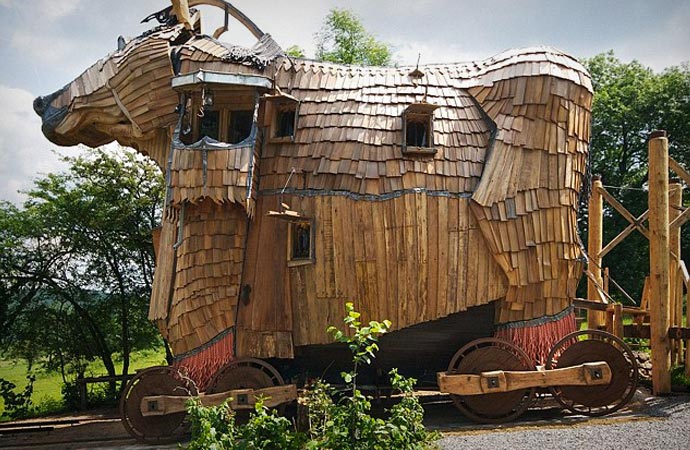 Look up the word whimsical in the dictionary, and we are pretty sure there is La Balade des Gnomes written next to it. This bed and breakfast, located near the 17th century Belgian town of Durbuy, is strange, intricate, surprising, out of this world, too fantastic to describe in words. Every spot in the hotel has a story to tell. You can spend a night in a troll’s lair or maybe at the two-story Trojan Horse suite, inspired by the Greek mythology. Whichever of the ten rooms you choose, you won’t be able to escape the feeling that you are the main character in one of Tim Burton’s movies. 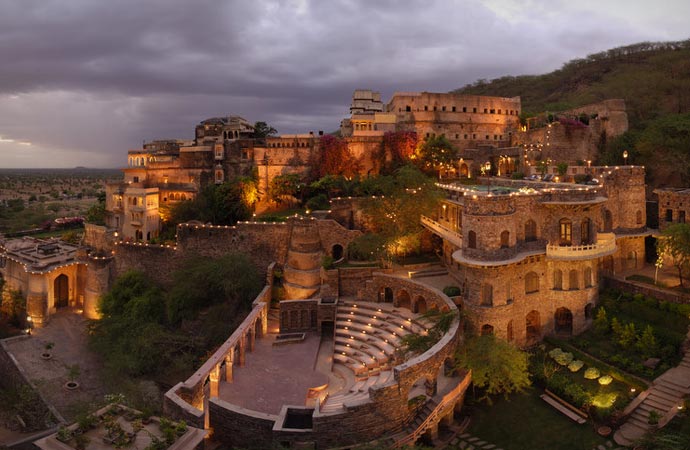 One thing about India that is unmistakable is that it will not leave you indifferent. Just like the Neemrana Fort-Palace resort! This is a reconverted 15th century fortress (originally built in 1464), spanning 25 acres with palaces tiered over twelve levels. The rooms at Neemrana range from  dungeons to suites fit for royalty. The resort’s hanging gardens are remarkable, and we won’t even go into the views from the two swimming pools. Staying at Neemrana Fort-Palace is a one-of-a-kind old world experience. 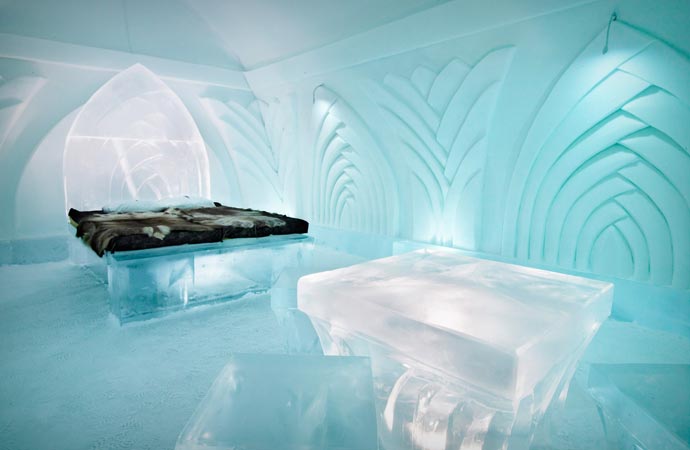 Here is another ice haven. With emphasis on the word ice. Yes, the sleeping quarters at Hotel de Glace are made from ice. Brace yourself for one of the coolest experiences of your life, both figuratively and literally. The hotel is located near Quebec, and is built from scratch every year. The rooms are carved in  beautiful and intricate ways, and there are some structures in the hotel which are permanent (i.e. they won’t melt once spring comes) – the shower rooms, the reception, the dining room etc. Warm sleeping bags are provided. 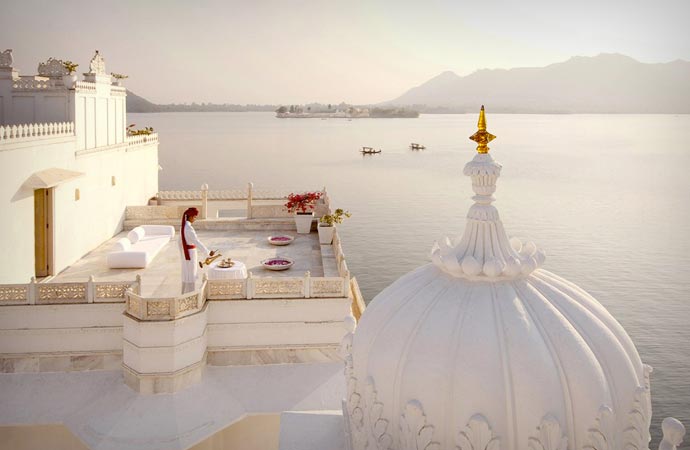 When you see the Taj Lake Palace from afar, it resembles a huge white marble ship floating on water. The hotel lies on Lake Pichola, and it was built between 1743 and 1746 by Maharana Jagat Singh II as a summer residence for the members of the Mewar Royal Dynasty. Many think of it as the best hotel in India, and one of the most romantic hotels in the world.  Jacqueline Kennedy, Queen Elizabeth II and the King of Nepal all spent the night here. The hotel has 17 suites, 66 majestic rooms, and four rooftop restaurants overlooking a lily pond. 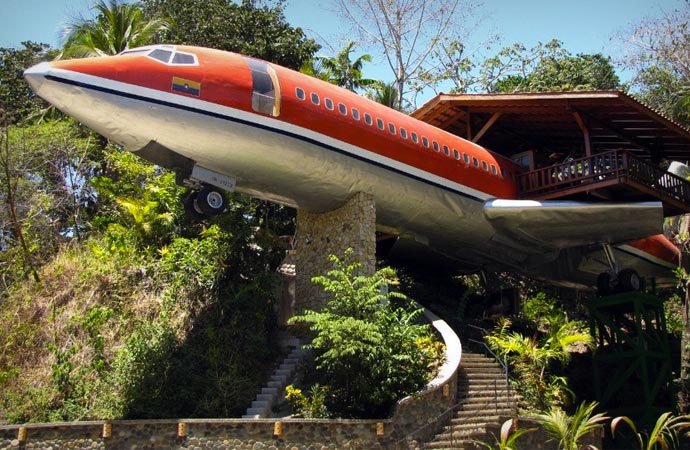 Have you ever slept in a plane fuselage in the middle of a rain forest? No? Well, in that case, pack your bags and head down to Costa Rica, to the Hotel Costa Verde 727 Fuselage. This two-bedroom hotel is actually a 1965 Boeing 727 which was salvaged from San Jose airport, perched on a 50 feet high platform. The panoramic views of the ocean and the surrounding jungle are nothing short of amazing.  The plane’s interior is decked in teak paneling, while the furniture is hand-carved in Java, Indonesia. 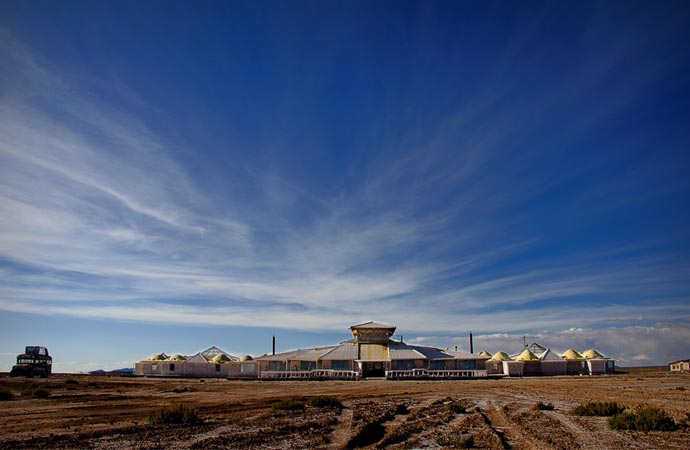 We have featured snow hotels, ice hotels, transparent bubble hotels, fairytale hotels, eco hotels, and now we want to introduce you to a salt hotel – Palacio Del Sal in Bolivia. This hotel is almost entirely built from salt blocks, and it lies on the largest salt flat in the world – Salar de Uyuni.  Over one million blocks were used to construct this resort, including the hotel’s furniture, walls, floors, and ceilings. Believe it or not, the hotel guests are not allowed to lick the walls of their rooms in order to prevent their deterioration. 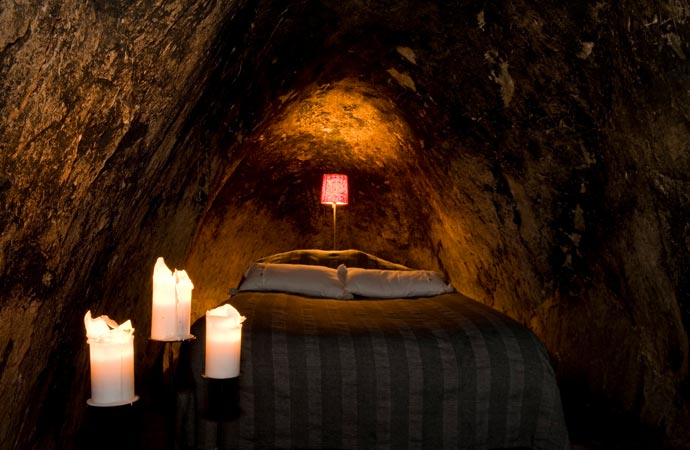 155 metres underground, in the historic Sala Silvermine, lies a hotel suite. Although you might think of mines are cold, damp, dark places, this suite is not. The temperature inside the suite is 18 degrees Celsius, and guests are given a warm cover and an additional pair of blankets. The suite has a king-size bed, with cheese, biscuits, fruits, sparkling wine and chocolate waiting for you.  Also, forget about mobile phones here. They just don’t work at this level. Instead, you will be given an intercom radio to communicate with a guide above ground. 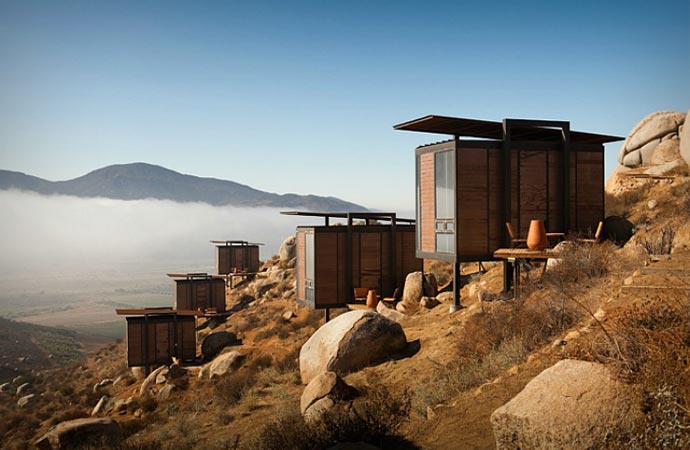 The landscape surrounding the Endemico Resort in Baja California, Mexico is unique to say the least. This is home to some of Mexico’s biggest wineries where, local craftsmen, built 20 unusual looking cabins in the desert, an hour and a half drive from San Diego. These environmentally friendly log cabins are elevated off the ground in order to reduce their impact on the landscape. Each cabin, made from sturdy Corten steel and wood, has a private terrace with a clay kiva to keep you warm while you sip wine under the stars. 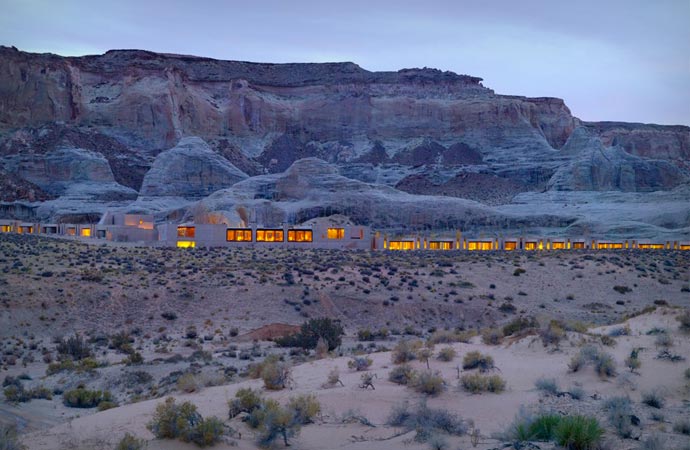 The beautiful, peaceful and elegant resort of Amangiri in Canyon Point, Utah, emanates calmness, tranquility, and esotheric enjoyment. Surrounded by rocks that are approximately 150 million years old, the resort has 34 suites. Although it looks very geometrical and stern in appearance, the resort’s walls are finely tinted with light yellow, pink and beige, the prevailing colours of the surrounded cliffs. Amangiri’s (which means ‘a peaceful mountain’) setting is so dramatic that it will leave you speechless. 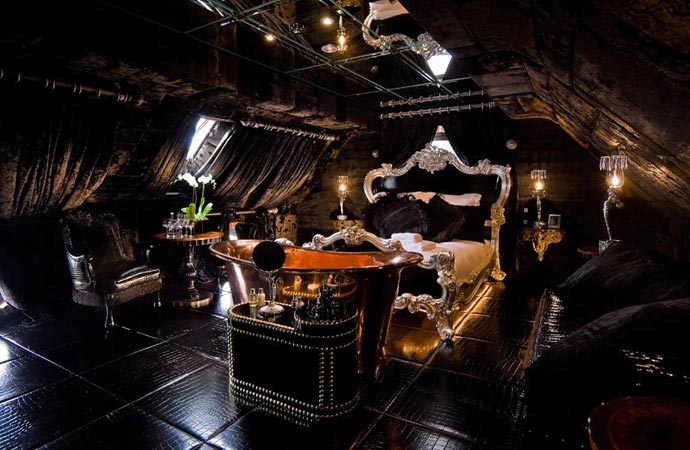 There is a very fine line between tacky and extravagant, and the Crazy Bear Hotel has crossed it on purpose. „Go big or go home“ is the motto that perfectly describes this hotel. Colourful, loud, brash, decadent, in your face, love it or hate it are the words that come to mind when you step inside the Crazy Bear. A cross between Versailles, a Russian mobster home, crazy disco era of the late 70s and early 80s, and flamboyant Las Vegas, the hotel lies in a 16th century building and features an 8 foot brown bear in the chandeliered gallery.