Car industry has certainly come a long way and electric cars are becoming a reality, much to a dismay of many a petrolhead. Electric cars are very energy efficient, completely environmentally friendly, they reduce energy dependence and their constant torque delivery provides great potential for some serious racing machines. Tesla S is the best example of this, though not the only one.

However, they do still have to deal with some issues. Electric cars need to have powerful batteries and even the best ones provide only up to about 250 miles of range. Ok, so you’ll have to charge your car a bit more often. Well, this is also a problem, because charging an electric car takes a lot more time than refuelling your petrol guzzling beast. Moreover, batteries are very heavy and bulky and they need to be replaced, which might be a problem since they are pretty expensive.

Even though battery technology develops on daily basis – just look at your mobile phones – and we are prone to thinking that they will become much more potent in times to come, they currently lack the capabilities wanted by most people. This is why manufacturers have come to a great idea – a mixture of the traditional and electric features brought us hybrids. These vehicles – Toyota Prius being the most famous – have both electric and internal combustion engines and their joint powers reduce consumption, while extending range.

Still the advancements in battery technologies we have mentioned increase the usefulness of electric cars, so we are moving towards a world where electric cars will be as present as their petrol/diesel counterparts, or even more so. Moreover, the CEO of Tesla Motors Elon Musk has recently said that all patents of the company are to be free for fair use in order to advance the technologies.

This is why we have decided to present to you the best electric cars available today. No hybrids, just pure electrics. Some of them are already on the streets, some others are well-developed concepts, but all of them lead the way towards a new page in the automotive industry. 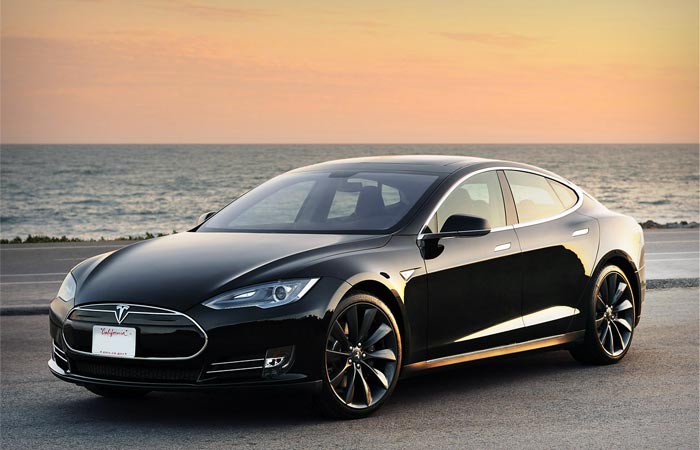 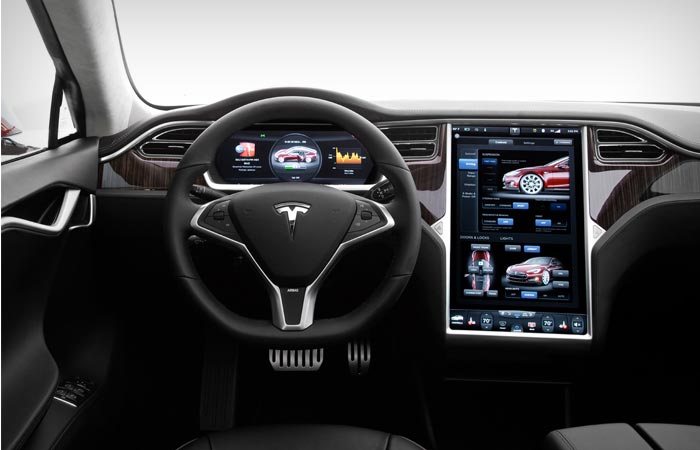 The first one on the list has to be the leader of the industry – the Tesla S. The first commercially available purely electric sports car in the world proves that there is a lot of future in this part of the industry. Even the Oatmeal creator Matthew Inman made a terrific comic review of the Tesla S showing why he thinks this is the best car in the world. I strongly recommend reading the review since it is a comical presentation filled with subjective praise, but also based on facts regarding the Tesla S’s features.

Objective characteristics of the car are also stunning. The five-door machine has the highest safety rating and great performance. Its EPA range is 265 miles, and its costs are equivalent to the consumption of 89mpg (2.64l/100km) of internal combustion engines. The 89mpg is already an astonishing figure, but adding to this the fact that the Tesla S has 416hp and 600Nm of torque makes the number even more stunning. The fastest option, called the Signature Performance, has the top speed of 130mph and it reaches 62mph in just 4.2 seconds. Bear in mind that electric cars have constant torque delivery, which means that it literally catapults from any speed with ease. The stronger 85 kW-h battery comes with an eight-year guarantee and unlimited miles.

What’s more, the Tesla Model S looks great. It is very sleek and modern with massive front and angular headlights. Its four-door setup makes it a bit bulky, but by no means ugly. The Tesla S is very elegant from any point of view. The interior is dominated by a 17-inch central touchscreen display which is extremely useful, though some may complain that it is too big from a purely design-oriented point of view. Still, nobody questions its functionality.

Loads of other tech features are available, such as various connectivity features, as are some purely practical functions such as the additional front trunk in the place where a traditional car would have its engine. At the back there is also a trunk, but with an additional option of a folding third row of seats for children, making the Tesla S a seven-seater.

Tesla is going strong into the future with the announcements of the Tesla Model X, a full-sized CUV which is supposed to have similar features as the Model S, just in a different crossover utility vehicle package.

Tesla is definitely leading the way in the electric car industry. However, some other companies have jumped on the bandwagon, including some well-established ones, such as BMW. 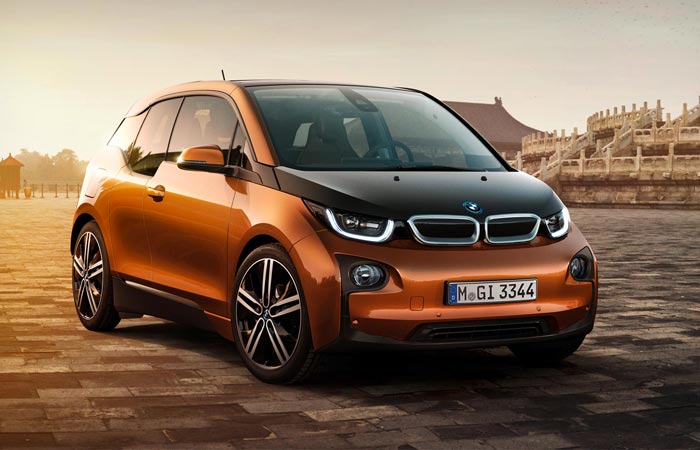 The BMW i3 looks like a futuristic toy-car. It’s not very big, so it’s very easy to park, which makes it perfect for big cities. Another feature that makes this curved box-like construction even more city-oriented is the range of just about 80-100 miles. Its price equivalent mpg figure would be 124 (1.9l/100km). There is a range-extending option of an additional 647cc petrol engine which serves as a generator to produce electrical energy and extend the range to the maximum 180 miles. However, for everyday city driving, the 100 miles range should be more than enough and with the price efficiency equivalent to the fuel economy of 124mpg on average, well worth it. 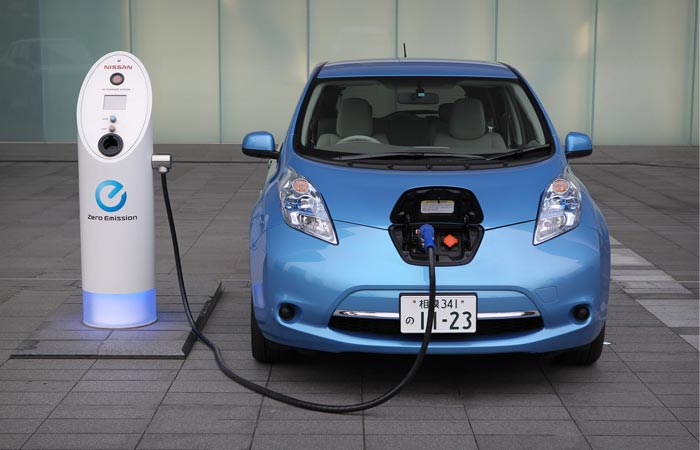 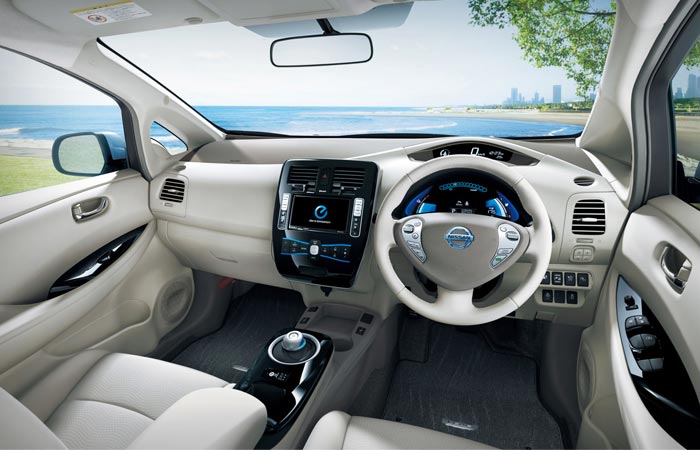 The Leaf in its name is an adequate wordplay both giving the connotation of an environmentally friendly vehicle and serving as an acronym for ‘Leading, Environmentally friendly, Affordable, Family car’. It is a five-door hatchback with the range of 75 miles EPA, but 109 miles NEDC and the fuel economy equivalent to 115mpg (2l/100km). The big difference between the EPA and NEDC findings is a matter of some controversy with many of the other findings being closer to the larger figure.

Its design is a lot more down to earth than that of the BMW i3 and the Leaf looks like a conventional modern car from the Asian manufacturer. However, many buyers will love the rounded futuristic interior of the Nissan Leaf, especially in white color.

The motor has the power of 110hp and torque of 280Nm. This setup provides the top speed of 93mph and acceleration to 60mph of 9.9 seconds.

There have been reports of premature loss of battery capacity in places with warmer climate, but Nissan offers extended battery warranty for these models. 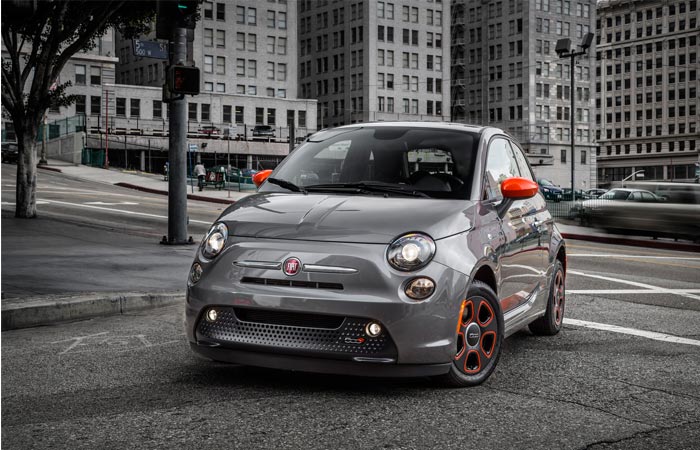 The Fiat 500 is already a design legend and the 500e is every bit as beautiful. The additional perk of being an all electric vehicle makes it even more appealing.

The small city-runner is equipped with a 111hp electric motor with 199Nm of torque which gives it the range of between 80 and 100 miles. The fuel economy is equivalent to 116mpg (1.9l/100km) on average. The 500e is significantly heavier than its petrol fueled brother, but this does not affect the performance much. The suspension is a bit stiffer, but this is not enough to cause a problem. If you are thinking of getting a Fiat 500 and use it only as a city car, you should take the 500e into consideration. The only question should be if you cover more than 87 miles a day, since this is the lowest range figure for this car serving as a measurement in the worst of driving conditions. If 87 miles a day is enough, you are probably better off with an electric option, especially having in mind the additional perks that most all-electric cars get. 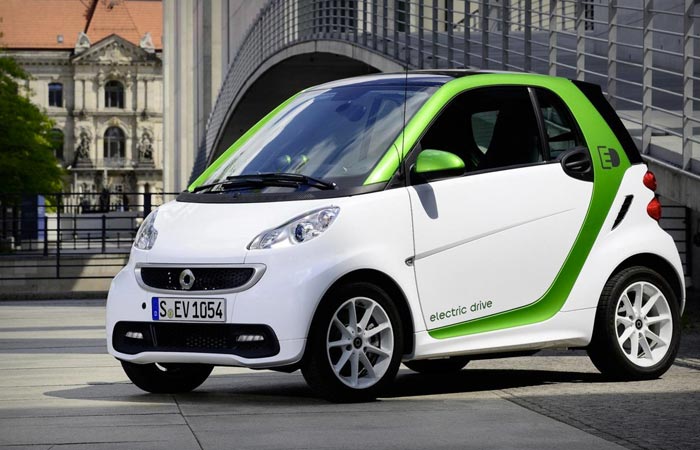 The current incarnation is actually the third generation of the Smart with electric drive, which means that the company has learned a lot in the process from the all-important experience. The result is the ultimate city car with the motor with the power of 74hp and 130Nm of torque. The extended range in this version comes to about 90 miles and the top speed ends at 78mph. Not very much, but you’ve probably never driven faster in a city in your life. It reaches 60mph in 11.5 seconds.

The city mpg equivalent is 122, while the combined driving figure drops to 107mpg. As many other electric vehicles that are intended to be used in a city, the Smart has a feature of artificial warning sounds that inform the pedestrians there is a car approaching. It is that damn quiet. 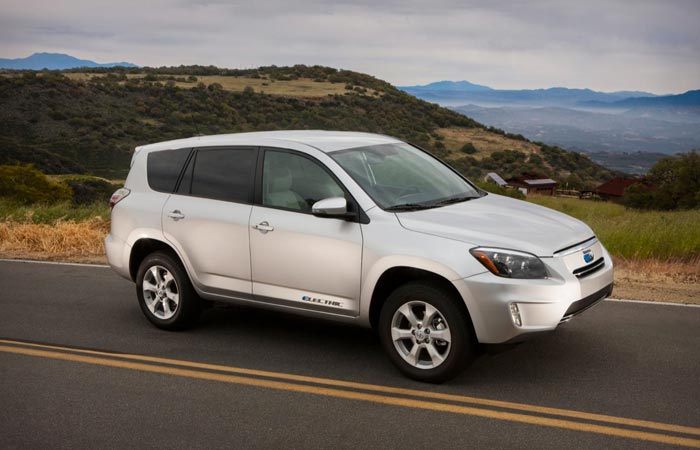 The first all-electric SUV we’re presenting is the RAV4 EV. It is a result of a collaboration of Toyota, known for its high-quality cars, and Tesla, known for its industry leading electric car solutions. This is the second generation of the car and it is just great. The mini SUV packs a 154hp electric motor with 296Nm of torque (370Nm in the Sport mode) which provides the heavy 4,030lbs car with the top speed of 85mph in normal mode and 100mph in Sport mode.

The combined fuel consumption equivalent figure is 76mpg (3.1l/100km). This is somewhat lower than with other cars here, but this is an SUV.

The all-important range issue differs between the Standard and Extended modes and it comes to 92 miles and 113 miles respectively. 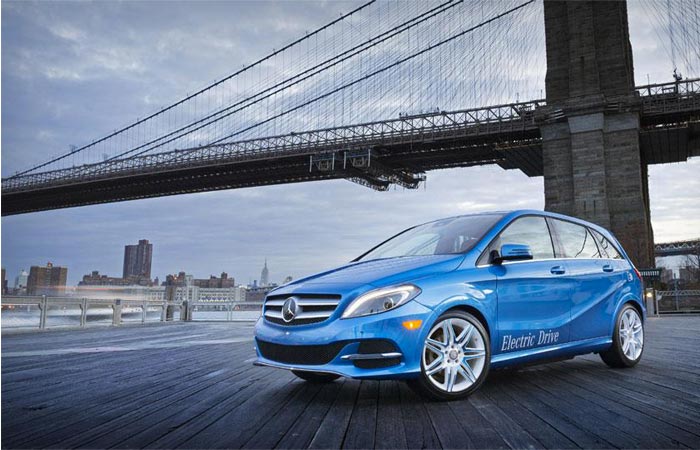 Another Tesla collaborate is the Mercedes-Benz B-Class Electric Drive. It becomes available this year, so there is not much information for now apart from the fact that it is based on the previous concept which had the 136hp motor and the top speed of 93mph. The only official number is the range figure of 85 miles EPA. 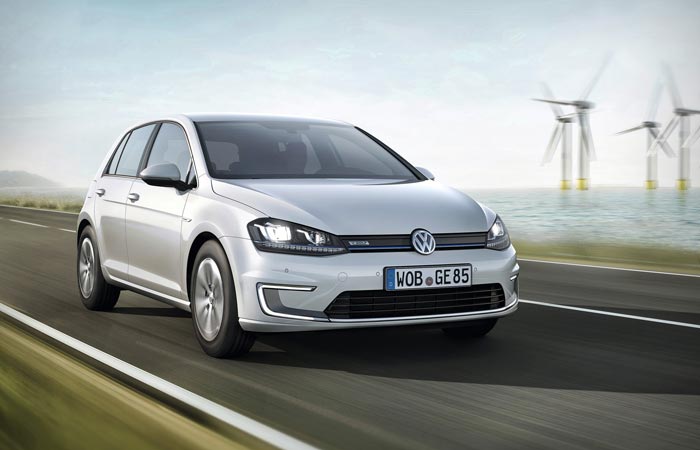 Another car scheduled to appear in 2014 is the e-Golf. One of the best sold cars in the world got its electric version to go with the GTE hybrid and the production model figures come only from the manufacturer so far. The range varies from 81 miles to 118 miles (later released NEDC says 120 miles), while the winter range drops significantly to just 50-75 miles. The top speed should be close to 86mph. 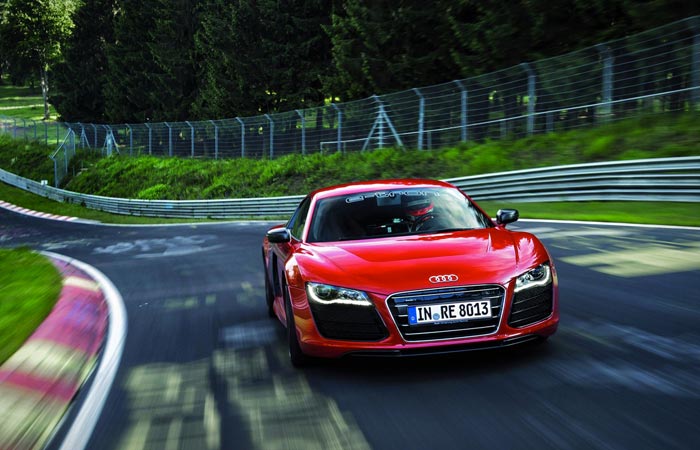 A fully electric R8. How cool is that. Well, it’s questionable. The petrol R8 is one of the most admired supercars in the world, so the electric version has to be amazing. It is announced for the second part of the 2014 and the figures so far bring its range close to 250 miles per charge. The R8 e-tron has two motors with the powers of 188hp and the amazing torque of 605 lb-ft, which give the expected acceleration to 62mph close to Tesla S’s 4.2 seconds.

Design-wise, the R8 e-tron is just like its much-loved petrol-fueled brother. Beautifully smooth and aggressive, with angry headlights and smooth rear view, but further features we’ll have to wait for. 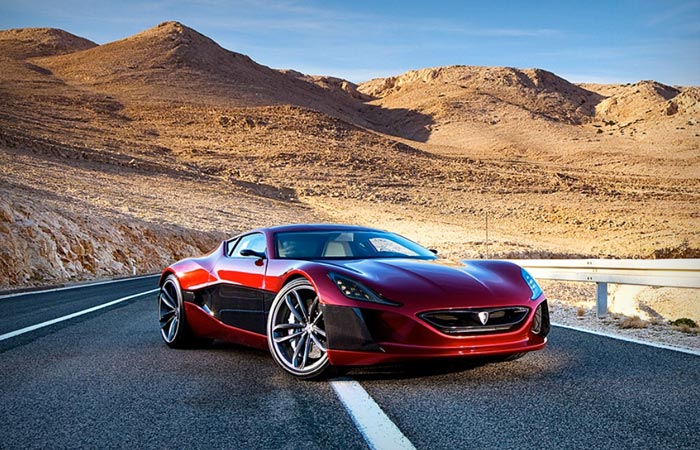 The design is also wonderful. The Concept One is more beautiful, elegant and aggressive than the Tesla S and the R8. Now, I know that many fans of the two cars (myself included) will find this hard to believe, but just look at it. Each part of the car is just perfect. Just as an example of the comparison, we have to say that the Concept One makes use of the large central-placed screen which is positioned and angled so well that no one will ever question it like the Tesla S’s screen is questioned for its design, size and placement.

However, the figures are the point. The Concept One is supposed to have 1,088hp and a whopping 1,600Nm of torque. No, neither of the numbers is a mistake. This setup gives it the electronically limited top speed of 189mph and the acceleration to 60mph in just 2.8 seconds. The range is supposed to be 310 miles.

This kind of a car will have to include loads of hi-tech features and just some of them are the All Wheel Torque Vectoring System and the unique ability to switch between the front and rear wheel drive. The Rimac Concept One seems like the future of the entire industry. We’ll just have to wait and see.