There’s no such thing as excessive versatility when it comes to fine music equipment, especially if the multifunctionality doesn’t take too high a toll on the quality of performance. One such multipurpose audio gadget is the ambitiously designed Sound Blaster Roar SR20 by famous manufacturer of digital entertainment products Creative, which packs a ton of innovative features found in few other wireless speakers in this price category.

Another remarkable addition to the company’s well-known Sound Blaster line of products (commonly associated with computer soundcards), Roar SR20 is a portable Bluetooth speaker that packs a built-in subwoofer and five speakers facing different directions (three of these are 3-inch drivers powered by one amplifier for remarkable mid-range and bass, and the remaining two are higher-end 1.5-inch drivers powered by the second amplifier). According to Creative, this configuration aims to provide balanced room-filling high-quality sound instead of emitting linear sound dispersing from one specific spot, which can be a highly precious asset in speakers used in noisy environments such as clubs, pubs, concert halls and dance arenas.

Thanks to its two separate high-performance amplifiers (one for high frequencies and the other for low-to-mid frequencies), Roar SR20 delivers crystal clear highs, well-defined mids and rich lows without any sound distortion even at max volumes. Plus, the speaker’s tradename ‘Roar’ button found next to the volume controls serves to additionally enhance sound by boosting the loudness, depth and spatial projection of playback beyond regular volume levels and increasing the projection distance to cover larger areas. 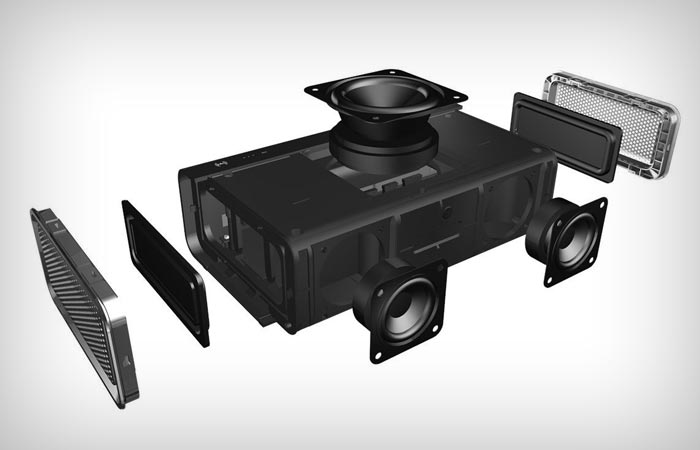 The usual Bluetooth speaker control buttons (Power, Volume Up/Down, Bluetooth/Call Answer/End and Roar mode), three-LED battery indicator, NFC pairing and Bluetooth connectivity and Roar mode lights are found on the top of the SR20 speaker, while the back panel holds a host of ports, including a power port, 3.5mm aux input, micro USB, 2.0 USB, microSD card slot and even some extra media and recording controls such as Play/Pause, Track Forward/Back, Shuffle/Repeat toggle, Play/Pause, Record button, mic mute toggle and alarm buttons. The USB port can be used to charge smartphones directly from the Roar SR20 battery and it can also serve as a DAC when streaming music from the PC, while the micro USB slot can be used either to connect the speaker to the PC or charge the device from a wall adapter. The MicroSD card slot can be used either to store music (works equally well withMP3, WAV, and WMA files) or record audio. When connected to PC, the SR20 MicroSD card slot also doubles as a handy SD card reader.

Thanks to the built-in NFC sensor, you can easily pair Roar SR20 with two Bluetooth-enabled devices simultaneously for alternating playback within some 40 feet of wireless range. The SR20 speaker will also pair well with source devices by means of the Bluetooth 3.0 connectivity, which can be used at the same time as the NFC connection.

As far as the built-in super-sensitive 360-degree microphone goes, Roar SR20 audio and voice recorder can be used as a speakerphone for your smartphone via Bluetooth, rendering outstanding call and voice recording quality. Just make sure your microSD card is safely in place and chatter away! On top of all that, Roar SR20 also sports a few kinky extra functions such as the Loud Sounds, Emergency Alarm and Bedtime Mode, which are not typically found in regular wireless speakers. With the Loud Sounds option, Roar SR20 plays a set of random tones and sounds at custom-set intervals to keep you from dozing off, while the Bedtime mode gradually lowers the audio output volume for a specified period of time as you’re preparing to turn in for the night. The Emergency Alarm is a one-touch police siren-simulating emergency signal accessible by holding the alarm button down for three seconds, and it serves to grab the attention of everywhere when you need it most. Sounds fun, yeah? 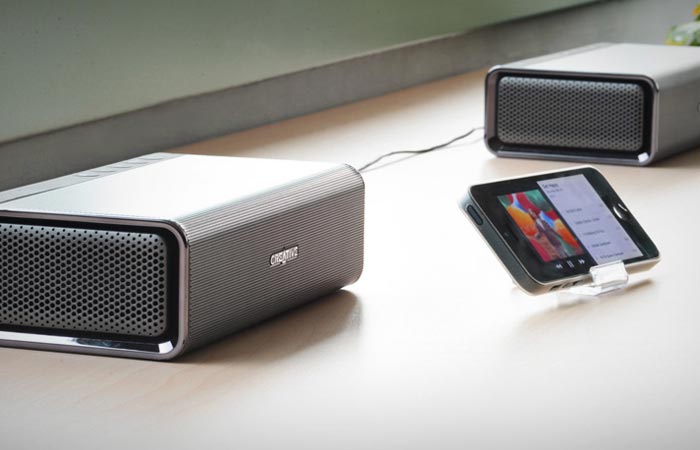 Design-wise, Roar SR20 boasts a stylish and compact booklet design recognizable by the Creative’s chrome accents, smooth curves and jet-black trim, with the top, front and sides covered in silver aluminum grilles. With the size at 2.2×7.9×4.5 inches (HWD) and weighing 2.5 pounds, Creative Sound Blaster Roar SR20 is fitted with a powerful 6,000mAh battery that can provide for some eight hours of audio playtime (which may vary depending on listening settings and use of phone charging functions), and a full recharge takes around three hours.

All in all, Creative Sound Blaster Roar SR20 is the byword for ultimate functionality: with the speaker’s outstanding performance, a variety of input options, phone charging capacities and speakerphone capabilities, a piece of audio gear just doesn’t get any more versatile. The producer also offers a netted carry bag for your Roar SR20, all with a hand strap and an extra shoulder strap for easy portability without having to compromise the sound quality. Go ahead – order your Roar SR20 today and have all the versatile audio functions you can think of right there at your fingertips. 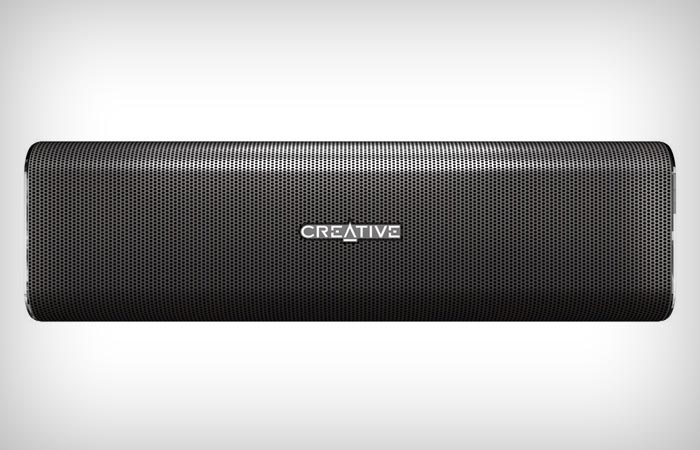 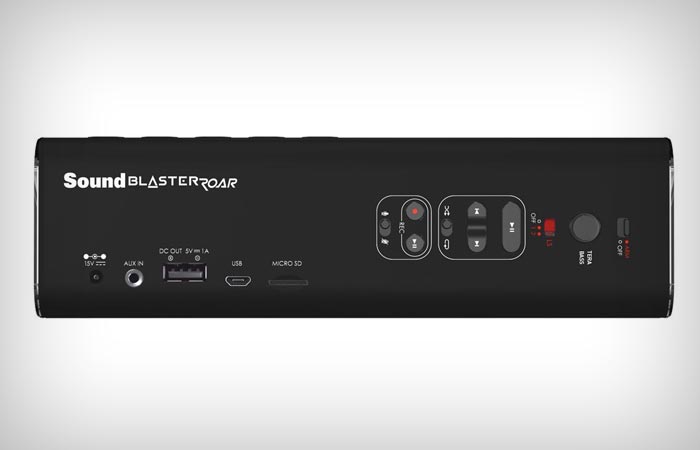 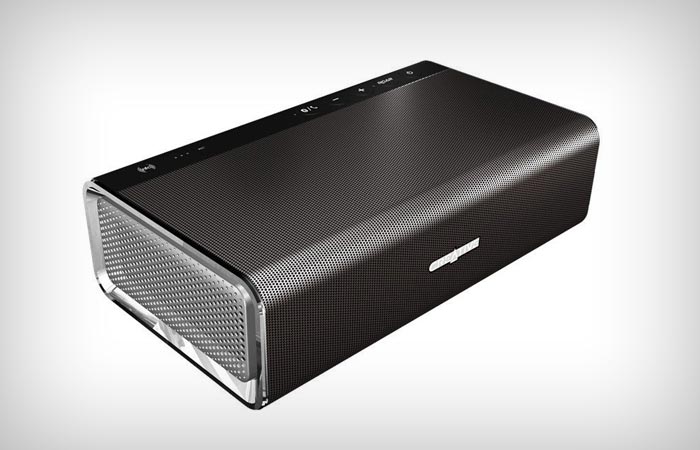