Bikes are a great mode of transport – they’re environmentally friendly, beneficial for your health, as well as highly affordable and relatively fast. The only problem is they get stolen quite a lot in big cities so you’d better keep an eye out on your two-wheeler 24/. But what if your bike just can’t fit in your tiny flat, or you’re not allowed to bring it into your office so one way or another, you simply have to leave it outside on its own to brave the would-be thieves and hope you’ll find it there the next time you need it, all locked with those bulky U-locks and chains? Worry not, mate – with Seatylock, your bike will be safe and sound at all times.

Currently crowd-funding on Kickstarter, Seatylock was designed by a New York-based team that came up with the Foldylock foldable bike lock concept a while ago. With their new brainchild, the team headed by Israeli designer Oren Livne aimed to create a bike security system that uses the saddle as the lock to deter both would-be saddle thieves and potential bike robbers. That’s two flies down with just one blow, but that’s not all – unlike most other ‘super-safe locks’ on the market, this crafty lock is dead simple and super-easy to set up.

“It takes less than 30 seconds from taking out Seatylock from the seat post to a complete lock, which is faster than handling the locking of most other locks in the markets,” says the design team. 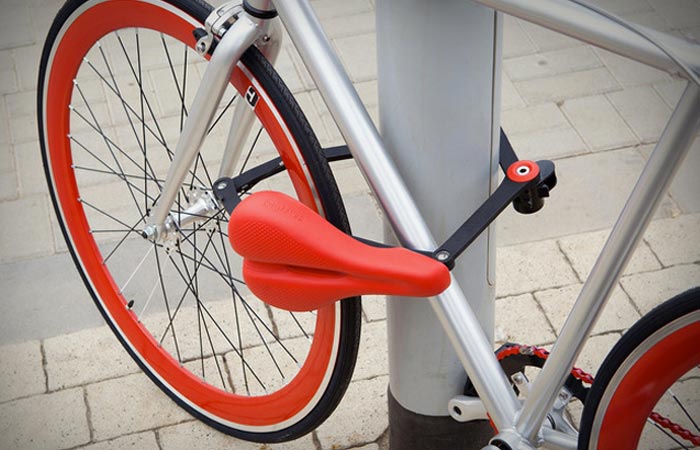 And here’s how it actually works: when you decide to park your beloved two-wheeler, simply flip the quick-release lever and unlock the Seatylock from the adjustable aluminum adapter mounted on the seat-post (the adapter has a universal design so it’s compatible with all standard city bikes, mountain bikes and even electrical bikes). Then, fold out the just over 3 feet long chain (it’s made from hardened steel and coated with plastic for maximum scratch-protection), place it around the bike frame and the lamp post, fence or other stationary object and finally lock it using the key. Compatible with most existing seat posts, Seatylock weighs less than three pounds and its ingenious position on the bike (the lock is packed under the rider’s center of gravity, i.e. the saddle) means optimum load distribution so you won’t feel any extra weight as you’re riding around town. Plus, in case you decide to fine-tune your seat or replace the old worn-out saddle, you can do that in a flash since the Seatylock adapter allows you to adjust your seat post after your preferred riding style (back/forward and up/down), and seat replacement is super-simple and requires no previous technical or mechanic knowledge. 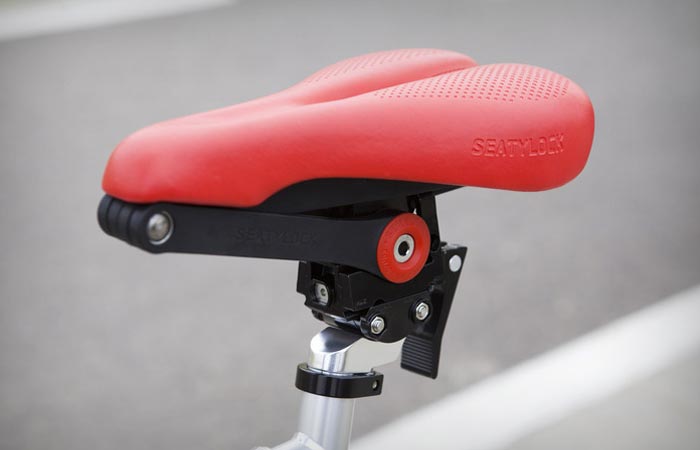 At this point, Seatylock is available in several different colors and designs, and you can choose between two different saddle models, the narrow 1.3-kilogram Trekking saddle for maximum agility or the wide 1.4-kilogram Comfort saddle with additional foam padding for the ideal riding comfort. On top of that, the design team behind the Seatylock is currently working on the sports saddle and gel saddle prototypes so these will probably be available shortly. The Seatylock is expected to go into production some time at the beginning of 2015, so make sure you grab yourself a piece of this ultra-comfy and super-safe locking mechanism. Forget about those hefty chains and complicated locks – with Seatylock, your bike will always be safe and happy even when you’re not around to guard it. watch video below