If you’re anything like we are and have had a lot of difficulty transferring files via USB cable to your mobile devices such as Android, iPad and iPhone, we think that we have found a really efficient solution to this problem which also shows you how quickly and amazingly technology has progressed. SanDisk has just launched their ‘Connect Wireless Stick’, a re-invented and innovative flash drive.

The SanDisk Connect Wireless stick is something of a hybrid between a wireless hard drive and a USB stick. By simply installing the SanDisk app on your computer, Android, iPhone, iPad or Kindle you can seamlessly and wirelessly save and access your videos, photos, music and files but it doesn’t end there. Sandisk has incorporated a feature that allows you to stream HD movies and music to 3 different devices simultaneously. 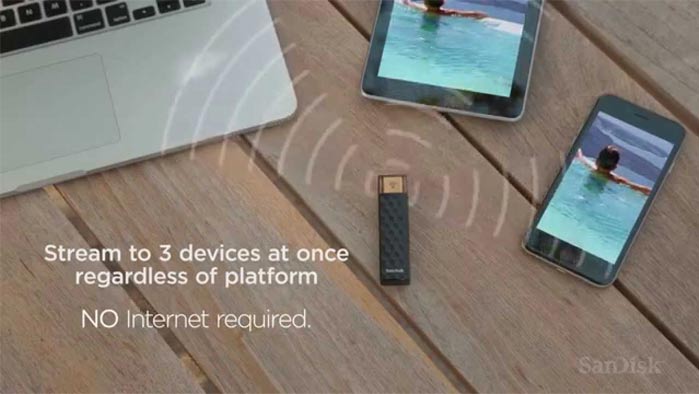 The SanDisk Connect Wireless Stick has an in-built battery that lasts approximately 4.5 hours and to charge it, you simply pop off the end cap over the USB and you plug it into a USB port which can also be used to transfer data. Starting off at 16GB and going up all the way to 128GB you will always have plenty of storage space that can be accessed while in your backpack or pocket. Besides, multiple device connectivity means that you can share with your friends whenever you wish. As pioneers in the development of USB flash drives SanDisk has once again delivered on the money with a product that won’t disappoint. watch video below