Ok, it’s official – the latest craze that has hit the global hi-tech market is the popular smartwatch. Almost all brands of internationally recognized electronic devices have revealed their takes on this clever phone-connected gadget, and yet the number of available brands and designs is growing at an unabated speed. Following the success of their Galaxy Gear smartwatch and other timepieces of the kind, Samsung has decided to dip its fingers into the game once more: the famous manufacturer of renown electronics has recently announced Gear S watch, another smart wrist wearable that pairs with your handpiece, allowing you to perform a variety of smartphone-related tasks – and judging by the announcements, it may as well outrun all the others in terms of versatility, durability and looks.

“Samsung is leading this exciting and rapidly developing wearable category through progressive innovation,” Samsung Electronics co-CEO and head of IT and mobile communication JK Shin says. “The Samsung Gear S redefines the idea of the smart wearable and the culture of mobile communication. It will let consumers live a truly connected life anywhere, anytime.” 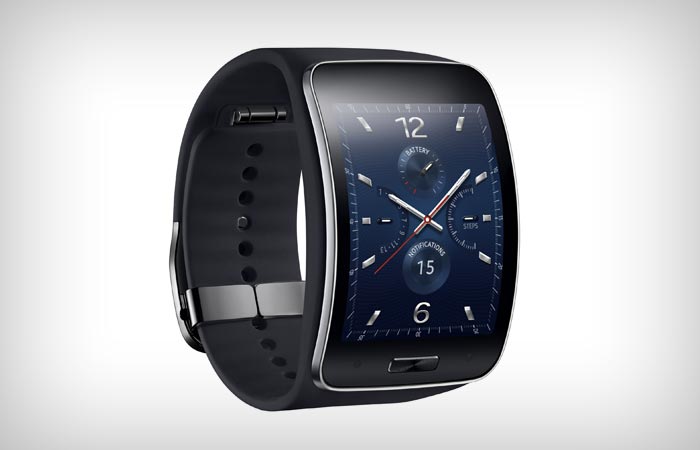 Featuring a classy 2-inch curved Super AMOLED screen with easy-to-use interface and subtle keyboard attached to a comfy flexible band, Samsung Gear S is the first smart timepiece that boasts an integrated 3G modem which, though perhaps not as fast as the one found in a full-fledged smartphone, allows you to make calls, receive messages and browse the web even when not in the Bluetooth or Wi-Fi range. Now that’s something that you may found truly useful when you’re away from your phone for a while but would still like to be able to check your inbox or take unexpected calls on the go, for example when going jogging, grocery shopping and the like.

On top of the built-in 3G modem and standard phone-based Wi-Fi and Bluetooth connectivity, Gear S smartwatch also packs a dual-core 1GHz CPU, wide range of health tracking sensors (including a set of heartbeat and motion sensors, as well as Nike+ Running application and some robust S Health features), Facebook support, 24-hour news and views service updates from The Financial Times ‘fastFT’ and even GPS and turn-by-turn pedestrian navigation. Instead of the Android platform, Samsung’s latest smartwatch runs the company’s home-grown Tizen operating system which is both fast and easy to use. Plus, Gear S comes with 4GB of storage and 512MB RAM, and it’s powered by a 300mAh battery which according to the producer can last up to two day.

On top of these neat features, Samsung Gear S is said to be IP67 dust and water resistant so you need not worry about typical menaces like occasional dips and heavy dirt when engaging in extreme sports and off-road adventures. Due to go on sale sometime in October, Samsung Gear S is all you’re looking for in a smart phone extra, so make sure you follow up on the updates if you want to get your sophisticated and ultra-versatile wrist wearable as soon as it hits the market.