If you love water-based adrenaline thrills and use every chance you get to try out new aqua sports, you’ve certainly tried wakeboarding at some point. It’s fun, adrenaline pumping and a great mode of recreation, but unless you have an equally enthusiastic water-loving partner eager to pilot the boat whenever you decide to go wakeboard a bit, you might just have to settle with regular ground-borne sports now and again. Well, you might’ve had to settle until now – but with Radinn electric wakeboard fresh in the aqua sport arena, you can hit the water whenever and wherever you like, no strings attached (quite literally).

Designed by Swedish designer team Alexander Lind and Philip Werner and premiered at the Cannes Yachting Festival by Radinn AB company which aims to revolutionize the water-sport industry, the Radinn electric wakeboard prototype sports a strong yet lightweight carbon fiber body and an efficient salt water-resistant jet propulsion system which allows the rider to glide across water much like on a regular jet-ski with the help of a wireless handheld remote control. By means of the waterproof remote, the rider can control the board speed which can go up to 25 knots (29 mph or 46 km/h) at the current stage of prototype development, although it may be somewhat higher once the final Raddin version hits the market. And though this little electric board may not let you perform stunts and tricks on wakes a regular wakeboard makes in the waves, it sure is surprisingly quiet, extremely fun and super-easy to ride so you won’t feel deprived of one too many wakeboarding advantages – save for the need to be pulled by a boat. 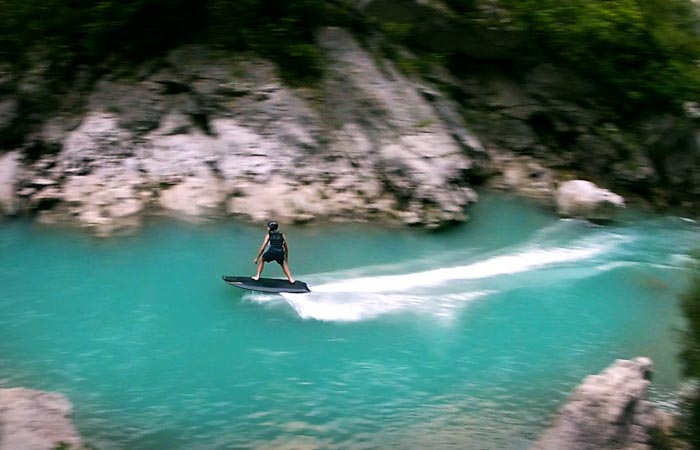 In order to keep the riders safe during their water-borne adrenaline kicks, the electric wakeboard is fitted with standard wakeboard foot bindings (the binds are removable so beginners can start learning wakeboarding by either kneeling or lying flat on the board). Small enough to carry around and fit inside a car trunk or a boat, the Radinn wakeboard is powered by a rechargeable lithium battery placed in the watertight compartment. The battery can be easily removed when you need to top it up with fresh juice, or can be swapped on the spot by a spare energy pack if you want to keep up the fun instead of interrupting your aqua adventure for a full battery recharge. According to the Radinn designers, the lithium battery inside your electric wakeboard will provide for 45-60 minutes of mixed-speed riding or 20-30 minutes of max-speed rides on a single charge. 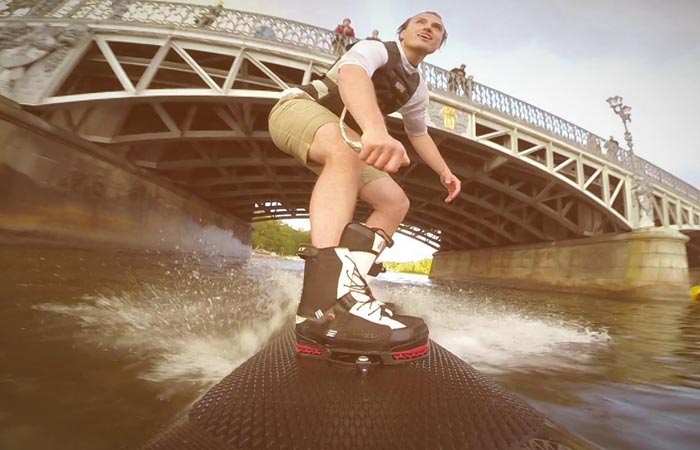 Built from premium materials and assembled in Sweden, the Radinn electric wakeboard (battery included) weighs as few as 29 kilograms (64 pounds) and it should go into production this winter, so the first shipments on pre-order are expected some time next year. In the meantime, keep the aqua hype up until your Radinn arrives and try out some similar aqua sport gear, such as the Schiller X1 water bike, Quadski XL, Jetovator, Water hoverboard, Woody handboard slyde, Gibbs Quadski ATV or Subwing Honeycomb – all of these are super-safe, originally designed and built specifically to get adrenaline rushing through your aqua-loving veins. watch the videos below