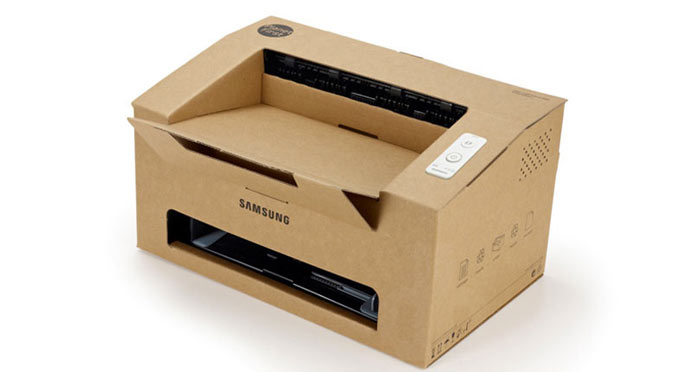 Inspiration often comes unexpectedly and from the strangest of places. Principle designer at Samsung, Seungwook Jeong was at a donut shop, observing how donuts are packaged when he realized that he could use the same concept in his line of work. Jeong asked himself: “What if we put the engine of the printer into a paper box, right in front of the customer, just like the donut shop?” And Samsung foldable carboard printer called ‘The Origami’ was born!

The idea was very simple – put a printer into a minimalist-looking corrugated cardboard exterior which can be recycled when the printer is no longer in use. One might wonder just how sturdy and long-lasting is a material like cardboard. Samsung insists that the Origami is fire and water resistant, but says nothing about the durability of the material. 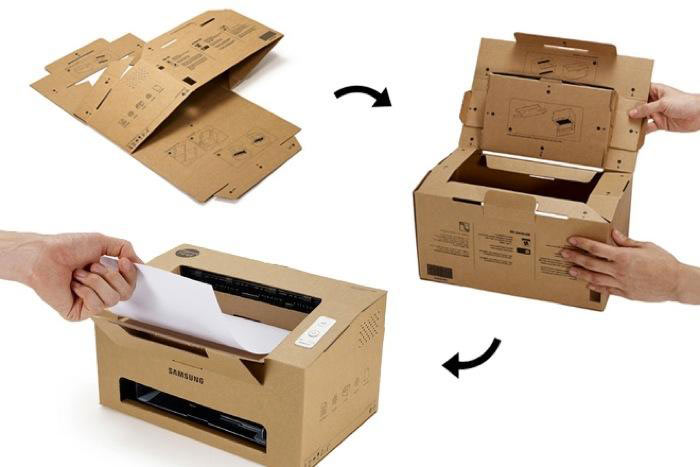 Still, the eco-friendly aspect of the Origami cardboard laser printer cannot be denied. The world is swamped with dead office machinery waiting to be recycled and when you think of environmentally friendly devices, printers usually don’t spring first to mind (scanning and e-mailing documents is always encouraged, printing is not).

The Origami isn’t the only novel printer concept that Samsung had come up with (an exhibited at the 2013 International Design Excellence Awards). There is a printer called the Clip which has no screws, but clips which lock the plastic pieces together, and the Mate, a customized printer with inter-changeable coloured panels. The three printers have won a total of nine awards, including 3 Gold Awards, at the International Design Excellence Awards.

There is still no word on whether Samsung plans to produce the Origami, the Clip and the Mate, since all three printers are still in the prototype stage. watch video below