Periscope app for iPhones and other iOS devices has been extremely popular these days, and now Periscope has some great news for their users. From now on you will be able to live stream your GoPro videos via Periscope.

Up until now, Periscope users were limited exclusively to cameras on iOS devices which limited the variety and quality of their videos. Now, everyone will be able to record their adventures and stunts using the GoPro Hero 4 camera and live stream them on Periscope. This new update is compatible with black and silver versions of GoPro Hero 4 camera while other GoPro cameras including the new Hero 4 Session are not yet compatible with the Periscope app. 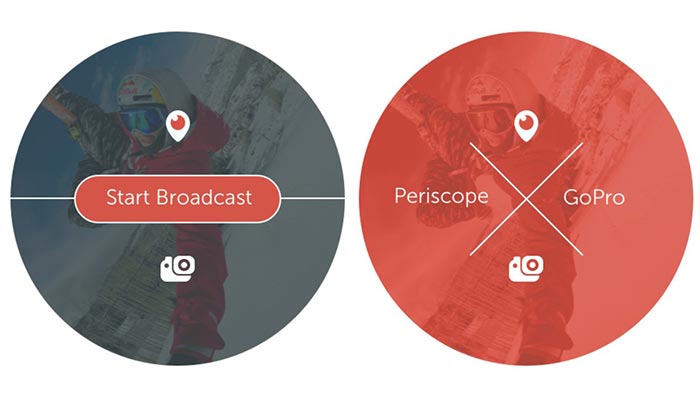 Just pair your GoPro camera with your iPhone and you can start to live stream your stunts.

It’s pretty obvious that you’ll get better angles and resolution using the GoPro camera, but you’re still going to need your iPhone in order to complete the stream. Of course, you won’t have to hold your phone or do anything with it once you’ve paired the devices. You can put it away in your pocket and continue to capture and stream your stunts with the GoPro Hero 4 camera.

With the amazing optics and a 170-degree field of view that GoPro offers you’ll be able to capture extremely sharp videos and live stream your adventures on Periscope. When you pair your GoPro camera with iOS device you will notice a “Start Broadcast” button in the Periscope app. During streaming, you can use your iPhone or iPad to see the comments and “hearts” on your video. The video you’re capturing is also being saved on the local SD card in your camera.

Inside the Periscope app, you’ll be able to choose whether you want to broadcast with your phone or your GoPro camera. You will literally be able to switch your devices while recording in order to get various angles and options.

On this new update Periscope collaborated with GoPro, so you can be assured that it won’t have any bugs. The Periscope app was already pretty popular with athletes and famous people but now, with this new update, everyone will be able to capture the activities of their everyday life as well as their action-packed outdoor adventures. If you’re an extreme sports enthusiast, this new update will definitely be right up your alley.

It’s important to say that this app will be available only on the iPhone 5s, 6, and 6+ running iOS 8.2 or higher. Unfortunately, there is no information if it will ever be compatible with Android devices. (via)