There’s no shortage of ideas on the smartwatch market: Casio has recently announced their G-Shock G’Mix GBA-400, Samsung is set to introduce another smartwatch, Gear S, following the success of their Galaxy Gear Smartwatch, and rumors have it that Apple is about to jump on the clever timepiece bandwagon along with Motorola, Sony, Pebble, LG and other producers of smart electronics. Now Meta Watch is joining the crowd too: the successor of former Fossil engineering team has presented their take on the smartwatch design that goes by the name of Meta M1 – and it seems quite competent of living up to the high standards set by other tech brands in the market.

Made to keep things as simple as possible, Meta M1 is a smartwatch unlike any other – instead of the overly digitalized futuristic displays, this unique wrist wearable is styled after the classic chronograph design and it features an elegant and simple non-touch screen. Still, M1 preserves the traditional smartwatch functionality of other digital timepieces out there in that it pairs with your phone via Bluetooth to deliver app notifications and calendar alerts. But that’s pretty much it – it can’t take voice commands or monitor your health parameters like some other timepieces of the kind. It seems that through M1, the Meta Watch company wanted to send a clear message – smartwatches are still watches, all their clever functions aside. 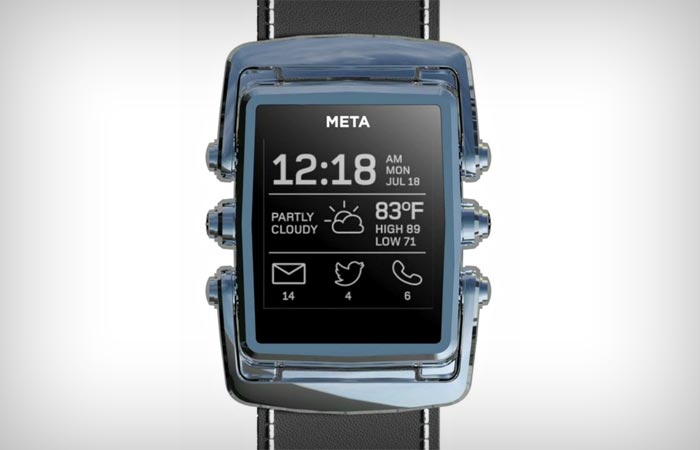 And indeed, the Meta M1 is a watchmaker’s timepiece built from a premium all-metal body and a rectangular black-and-white LCD screen inspired by analog chronographs, with all buttons grouped on one side to keep it as stylish and neat-looking as can be. In the basic $249 model, the case is attached to a vanilla-scented natural rubber band, but you can upgrade the strap to leather or steel on a slightly more generous budget. 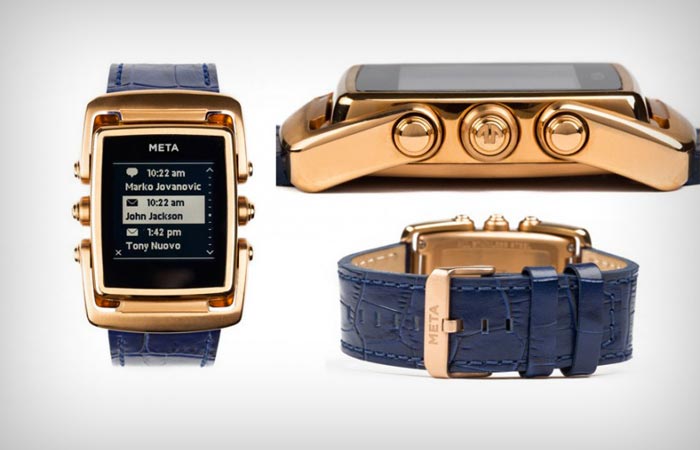 Built for your maximum wrist comfort, M1 boasts a unique armature system designed by Frank Nuovo. The buttons are built into the armature hinges for easy control of the smartwatch functions, while a charging port is located on the bottom of the timepiece so can juice up your M1 without any difficulty via a Micro USB charging connector held tightly in place by a magnet. Easy to read in bright sunlight and in the dark alike, Meta M1 has a high-res high-contrast display with several traditional digital and analog-inspired watch faces and it was primarily designed for lovers of traditional wristwatches, not all-in-one enthusiasts as it does not claim to be capable of doing it all – the smartwatch does send you notifications, but you still need to go to your phone in case you want to respond to calls or messages. 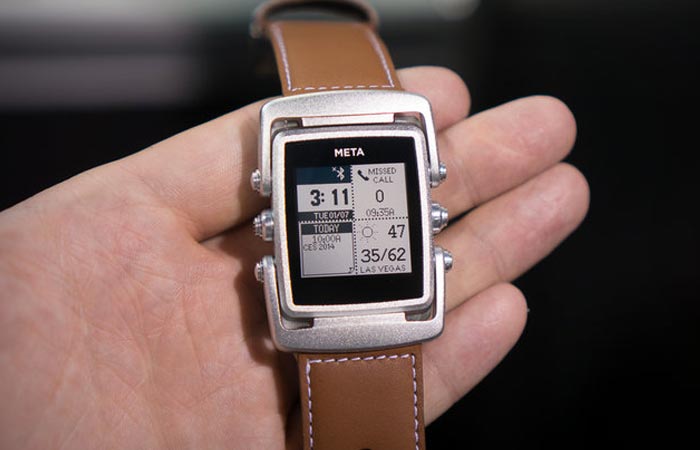 Likewise, it doesn’t have an application store nor should you expect one to be announced soon. But what it does have is a companion application that works well with iOS 7 and Android 4.3 or above, allowing you to rearrange home screens (time, calendar, phone music remote control, notifications, weather and countdown timer) on your smartwatch after your own liking and even filter important notifications from various applications. Some software upgrades have been announced, including a live sports-score application and a pedometer that will work with most fitness applications already available on the market.

Available in several different color and strap material configurations and compatible with most up-to-date Android or iOS devices, Meta M1 is said to be water-resistant to 3ATM and claims a lengthy battery life of some 5 to 7 days on a single charge. So, if you want to stand out from the rest of the crowd wearing digitalized smart timepieces and flash around a chrono-looking smartwatch for a subtle hint of unbeatable traditional style, you should definitely check out M1 – It may not do everything but when it comes to some smartwatch basics, it does exceptionally well. 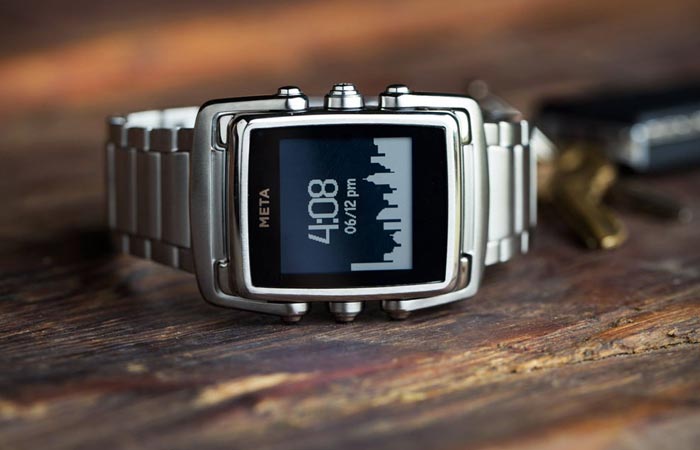