Are you one of those who still haven’t come up with a unique, interesting yet useful gift for a dear person of yours whether for the past Christmas or the upcoming New Year’s or better yet birthday or any other kind of celebration? Well this might be just the thing for you.

An industrial designer and interior architect, Karim Rashid has come up with a product without which never again shall you start any celebration or throw a party. Champagne Sabre enables you to open a bottle swiftly and extravagantly. All you have to do is aim towards where the vertical seam where the bottle meets the top lip of the bottle, and strike away from the base. The best part is that the normal pressure from the bottle makes sure that not one piece of glass gets inside of the bottle thus contaminating the champagne. The crock and collar remain together after separating them from the neck of the bottle. Pay attention to position the bottle approximately at 45 degrees and with a quick movement of your hand perform the action. Don’t worry about what happens after the cork and collar have been removed, the remaining top of the bottle won’t be sharp and cannot cut. The contents of the bottle, due to the pressure, will come out exactly as if you were opening the bottle in the old, traditional way. 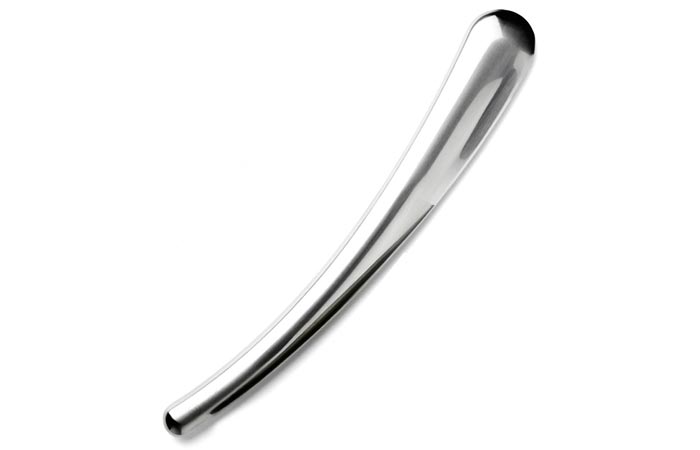 For history lovers, the technique of opening the bottle this way became popular in Napoleon time when his army visited many aristocratic domains. During those occasions, Napoleon’s cavalry would exclaim: “Champagne! In victory one deserves it; in defeat one needs it.” And even now, almost 200 years from his death, champagne remains number one beverage in moments of celebration and the most expected moment is the coming out of the cork and the foam. Sometimes things don’t go as planned and you need several minutes to achieve what you intended and for your company to burst out of excitement. This piece of polished, stainless steel cuts the waiting and nerve breaking the same way it cuts the bottle.

With this in your hand, you’re taking the center stage at your every future gathering with your friends and family with which you will serve your guests in a fashion they have never seen before and won’t soon forget for sure.