Despite the huge number of ready-made hammocks, inflatable mattresses and sleeping bags available on the global market, finding a quality yet compact sleeping gear for ultimate camping adventures is not an easy task. But worry not – with Roo hammock, created by well-known outdoor gear manufacturer Kammok, all your sleeping woes are as good as gone because this little guy has all it takes to make your naps as comfy and as safe as snoozing on your couch back home – and it’s also light as a feather too.

Made from 56 square feet of the company’s incredibly lightweight, extremely breathable, UV-, mildew- and tear-resistant proprietary rip-stop nylon fabric called LunarWave triple-stitched to two strong Dyneema Racer suspension slings and outfitted with a set of sturdy Kanga Claw climbing carabiners that can hold up some impressive 2,500 pounds of weight, Roo saw its global Kickstarter debut back in 2011 when it was announced as ‘the world’s best camping hammock’. Dead-simple to set up, incredibly sturdy and extremely portable, Roo easily fits into a water-resistant two-layer roll-top compression sack with reflective drawstring, nylon rip-stop shell and DWR finish for the outer layer and weighs a slight 24 ounces (carabiners included). Once set up, however, this little guy can stand up to 500 pounds of load so it’s strong enough to take in two adults without a problem. 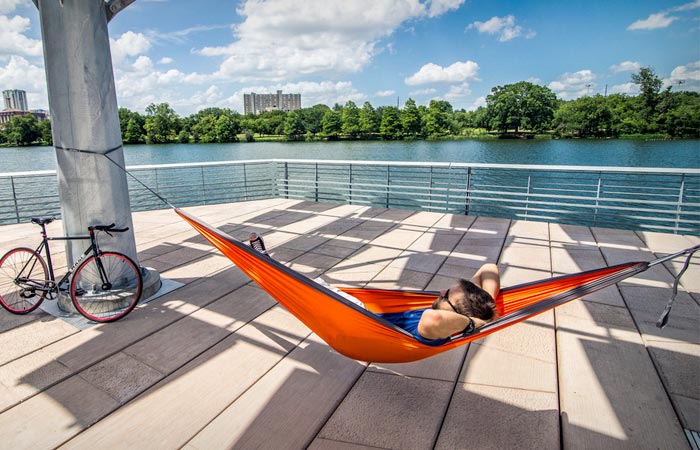 Boasting triple interlocking stitches with some high tensile strength threads, reinforced stress points and multiple gear attachment loops, Kammok’s hammock masterpiece is exceptionally comfortable, stable and spacious enough to accommodate any avid outdoorsman and their partner of preference. Another of Roo’s bonus is that it takes you off the ground so you need not worry about ground moisture, predators, bugs, ants and other creepy-crawlers that may come flocking around while you’re snoozing away after a hard day’s hiking, exploring or mountain climbing. Measuring 5 feet and 7 inches by 10 feet when folded out, Roo is available in several different color combos: Roo Red, Nakuru Blue, Gold Coast, Sahara, Zilker Green and Half Moon so you can easily match it to your favorite camping gear. 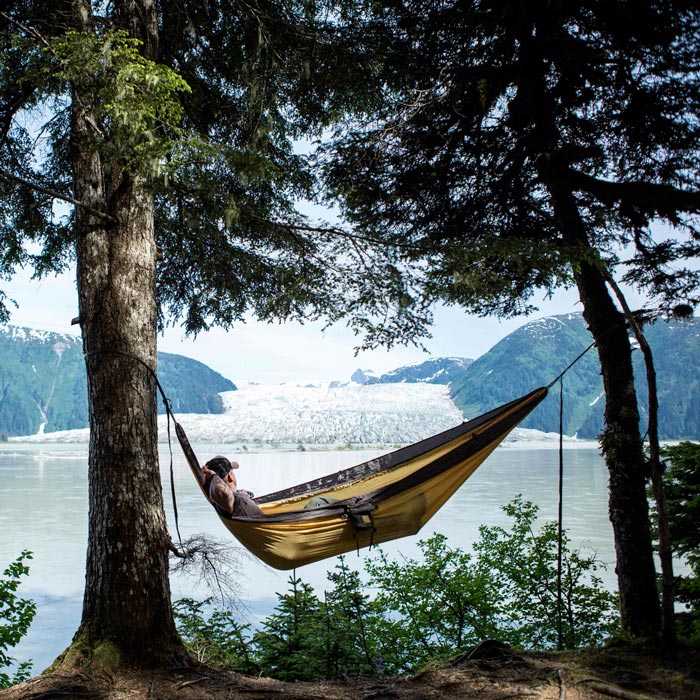 But there’s another convenient twist: Kammok offers lots of neat gear upgrades to go with Roo, such as the 10-foot daisy-chain suspension Python Straps with 18 attachment ends that let you set up your hammock between anchor points (trees, posts, rocks and the like), or the Dragonfly insect net to ward off unwanted blood-sucking pests and the freshly announced Glider tarp shelter for some superior off-road fun. And as if that wasn’t enough protection-wise, Kammok decided to join the Malaria No More campaign and donate some treated mosquito nets or health education for families in Africa for each hammock, net or shelter purchased at their website. The company’s also a partner of the 1% for the Planet and allocates at least one percent of its total sale revenues to environmental and sustainable initiatives worldwide, and it’s also providing assistance through CTC International in the holistic development efforts for communities in Kenya. Now that’s some real charity in action, wouldn’t you say?

With your new hammock, slings, carabiners and compression sack, you also get a lifetime warranty and 100% satisfaction guarantee so basically, all you need to do to get your paws on this neat sleeper and snooze away a hot afternoon siesta in the middle of a forest is hit the Order button and prepare the vital gear for your next camping adventure as son as your Roo arrives. Try it out – we guarantee you won’t regret it. watch video below