Pagan Kennedy is a former columnist for the New York Times Magazine and she has also written eleven books. One of those books is called Inventology: How We Dream Up Things That Change the World. And the title really says it all. This is a book about random and regular people who managed to invent something that can literally change the world we live in. Inventology describes the process and the important steps that someone has to make in order to invent something.

If you like inventions and if you want to someday invent something great, this book may inspire you to finally do that. Inventology contains stories about some people who managed to create things that will help people in everyday life as well in some extreme situations. For example, there is a story about a dad who was cleaning the house after his toddler son spilled juice all over the place. The father then came up with an idea for a “sippy cup”, a cup from which kids just can’t spill their beverage. 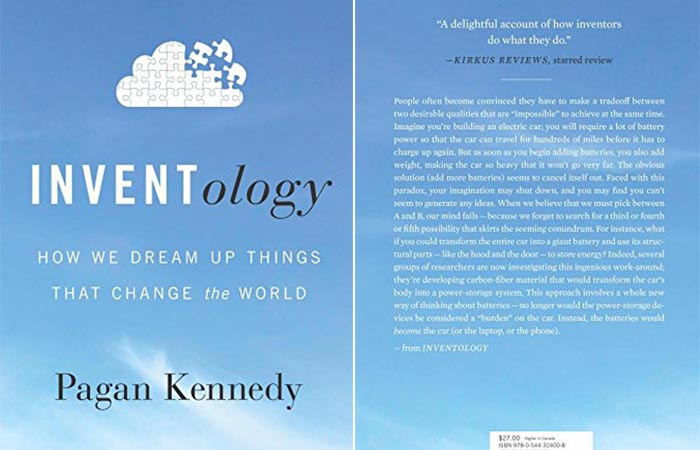 This book is great for designers and inventors who want to get inspired and motivated.

Besides this story, there is a story about a man who saw people using walkie-talkies and imagined how cool it would be if we had little, mobile phones. In this book, you’ll also find an interesting story about a businessman that was struggling with his heavy luggage at the airport, so he invented a suitcase with wheels on the bottom. Oh, how are we thankful for that!

So, if you want to find out how these people got inspired and what they did on that path towards the invention, this book can help you with that. During the whole process of creating this book, Pagan interviewed engineers, scientists, psychologists and economists in order to get the best possible information. Inventology is a great book for everyone out there who is into inventions and design.