Why keep staring at your smartphone for a perfect shot of a family gathering, camping trip or your favorite band’s concert when your can capture excellent shots in outstanding detail while still enjoying the moment without screen distraction? Well, that’s probably what premium phone manufacturer HTC had in mind when they set out to create Re action camera– the slick standalone digital camera allows you to snap quick photos and capture short video clips without getting in the way of your real-life experience and it also easily connects to Android or iOS smartphones for quick media transfer later on.

When shooting with your camera or smartphone, you often have to focus on the moment as seen through the display and not on the actual scene. That’s where Re comes in: barely larger than a regular Pez dispenser, this pipe-like screenless camera puts you back in the center of the action while filming your experiences either in 1080p/30fps HD footage, 720p/120fps 4x slow motion clips, time-lapse videos or 16 megapixel stills.

To keep the design as minimalist as it gets, the tiny periscope-like HTC camera is viewfinder- and display-free and it has no graphical user interface – in fact, all it has is the ultra-wide angle fixed-focus lens with an incredible 146 degree field of view, 16MP sensor and two buttons, one up front and another on the back. The silver button found on the Re back is the capture toggle, which shoots stills at a simple quick press and records videos at a longer press-and-hold motion, storing them directly onto the included 8GB microSD card (in case you decide to upgrade, Re supports microSDs up to 128GB). The front button puts the tiny camera into slow motion mode, and there’s also a couple of LED indicator lights to show when Re is video recording (LED blinking red) or recording in slow motion (LED blinking blue). On top of that, there’s a microphone on top of the cam, a speaker next to the slow-motion button and a micro-USB charging/data port for simple juice-ups. On a full charge, the Re 820 mAh battery can provide for up to 1 hour and 40 minutes of continuous 1080p HD video recording or up to 1,200 still shots before needing a top-up. 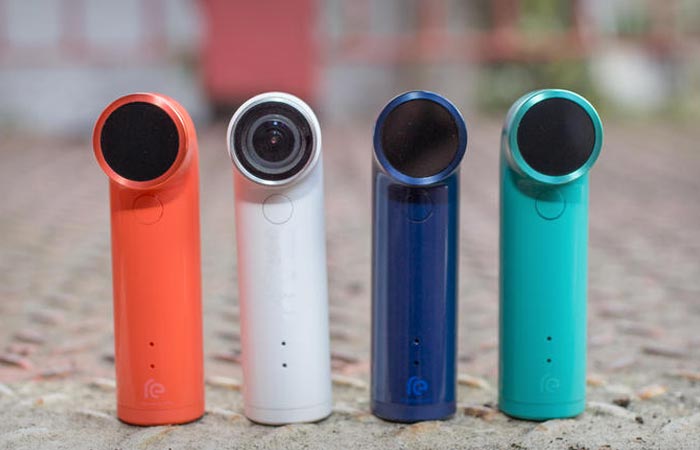 Surprisingly enough, Re has no ‘on’ switch – it is conveniently designed to be always on, i.e. to come out of standby mode and switch on automatically when you pick it up thanks to the capacitive sensors found in the handle. Thanks to its ultra-wide angle lens, it can reportedly capture everything around you without interrupting your immediate scene experience and it handles focus by zooming in zero on the closest item. The HTC camera works with a companion application, which lets you view captured images and footage and adjust settings. It pairs with an iPhone or Android phone via Bluetooth for instant streaming and allows for simple media transfer via Wi-Fi Direct, and you can also use your smartphone as a remote viewfinder and set the camera to the time-lapse mode. Measuring only 96.7 x 26.5 millimeters and weighting as few as 65.5 grams (2.31 ounces), Re is small enough to fit in your jeans pocket and be used one-handedly on the fly, and since it’s made of glossy plastic, you won’t even notice it weight-wise until you next need it. But despite its inconspicuous size and bulk, Re is sturdy enough to stand some tough love – its dust-proof and water-resistant exterior protects the critical components stored inside, so it can endure a few toss-arounds in the dirt and even be submerged in water down to one meter for up to 30 minutes and still keep shooting.

Compatible with Android 4.3 (and up) and iOS 7 (and above) devices, Re can instantly stream everything you shoot on your phone and it can automatically upload your media to the cloud for simple access and easy sharing on social networks. HTC also offers a number of accessories for your Re, such as a quarter-inch tripod mount, waterproof case and handlebar bike mount. Due to go on sale at Best Buy and a number of other retailers later in October, HTC Re will be available in several different colors (orange, white, dark blue and teal) so make sure you grab yours as soon as it hits the market.