Has the time come? Can a car finally drive itself? Google has been working towards a self driving car for a while now and they have presented a car that seems to be able to do this.

The entire process is still in prototype phase, but they seem to be able to ‘operate safely and autonomously without requiring human intervention’. With the prototype, Google convinces the unbelievers that the self driving is safe even though the car lacks some features that a conventional car has, such as a steering wheel and pedals, and you can’t drive a conventional car without those.

The driving is performed by sensors and a designated software solution. All you need to do is press a button. The sensors deal with everything else and they are expected to be better than a human driver, removing any fear of blind spots, or unexpected encounters for example, by detecting any object while it is still very distant. 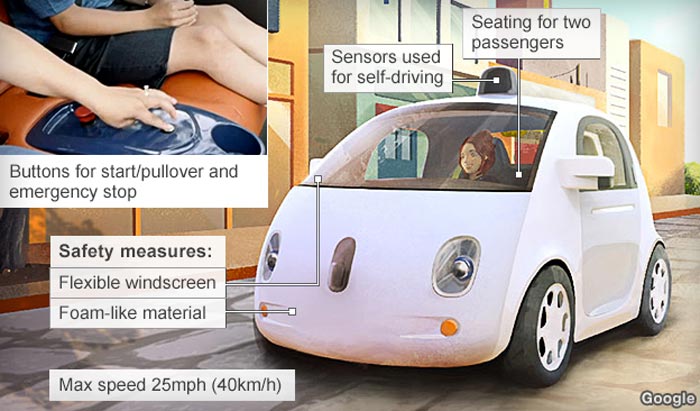 The top speed of the vehicle is only 25mph, but this was done deliberately. The current incarnation of Google’s Self Driving Car is only for testing purposes, so higher speeds are not necessary. The interior reflects this as well. There are two seats, some extra room, start/stop buttons and a screen.

During the summer of 2014 the test drivers will have a go in these cars, but their versions will also have manual controls in order to prevent anything unexpected.

So the answer to the question from the beginning of the article is (can a car drive itself?) – not really. But, watching the video below, we can see that the technology is not far away. It seems that we will actually be able to save time during our daily commutes through busy rush hours that require our full attention. On the other hand, being a proper car freak, I would not like it if all cars became self driving boxes. [via]