It seems that hardly a day can go by without some major innovation on the growing smartwatch market. Samsung, LG, Motorola, Apple, Sony and the rest of the hi-tech crew have already released or at least announced their versions of the increasingly popular smartphone extra; now, world-famous watch manufacturer Casio has decided it’s time it presented its take on the hip smartwatch design. Meet G-Shock G’Mix GBA-400, the first Casio watch that can easily pair with your phone to perform some basic smartwatch tasks.

Another piece in the well-known G-Shock series, the G-Mix can pair with your smartphone via Bluetooth Smart connectivity within 30 meters of wireless range and perform some of the most common smartwatch functions, such as music playback control (including volume, track and equalization adjustments by twists of the rotary dial integrated on the side of the watch), handy e-mail, message and call notifications, airplane mode and even handy track recognition available through the popular SoundHound application. According to the manufacturer, GBA-400 will work with any phone with iOS 7 or a newer system, as well as with Samsung Galaxy sets with Android 4.3 or above.

So, instead of trying to cram a ton of ‘smart’ features (many of which you may never get to use, truth be told) into one cool-looking and even cooler-priced digital wristpiece, Casio has decided to throw in some of the most frequently used smartwatch essentials into the GBA-400, while preserving the rugged heavy-duty design. Like other pieces in the G-Shock series, G’Mix is impact resistant and water-resistant to 200 meters so it’s well-suited to a wide range of professional profiles and most extreme sports such as scuba diving, rock climbing, surfing, paragliding etc. 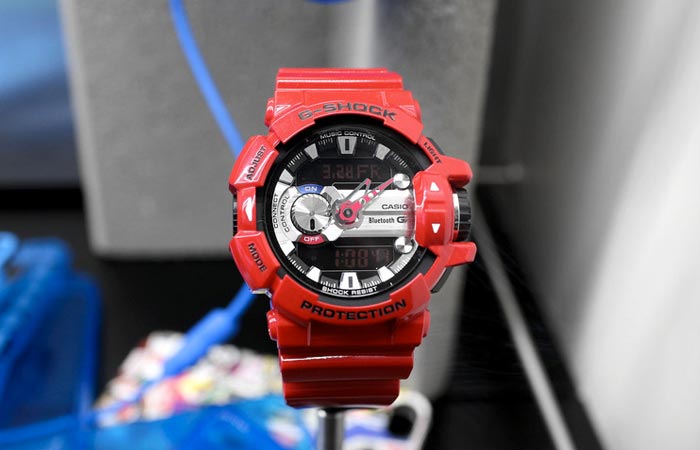 Design-wise, the G’Mix Casio has preserved the sturdy-looking watch exterior in a case measuring 55×51.9×18.3 millimeters (HxWxD) attached to a resin strap and topped with a high-contrast LCD screen and scratch-resistant inorganic glass cover, weighing a total of 70 grams. On top of the main smartwatch features, GBA-400 packs a handful of digital timepiece usuals, such as the 12/24 hour-format display with 35 time zones, stopwatch, timer, auto calendar and a set of five alarms (first of them snoozable). On top of that, G’Mix comes with a white LED Super illuminator with afterglow function which means super-easy dial reading in the dark. There’s also another great piece of news, and it’s about G’Mix battery life: according to Casio, even with two hours of smartphone functions use a day, GBA-400 battery will last you an unbelievable two years, after which you’ll be able to replace the battery just like you would in any other wristwatch.

G-Shock G’Mix is due to be released in Japan on September 19, and should hit the worldwide market soon thereon. Available in four different colors, including blue, red, black with a silver face and black with a gold face, G-Shock G’Mix by Casio is a wristpiece you should definitely bear in mind when looking for a little smartphone-compatible extra to round off your digital tech pantry. 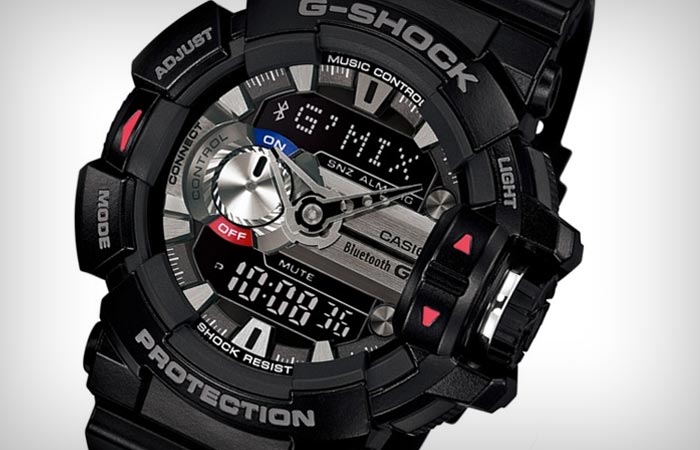 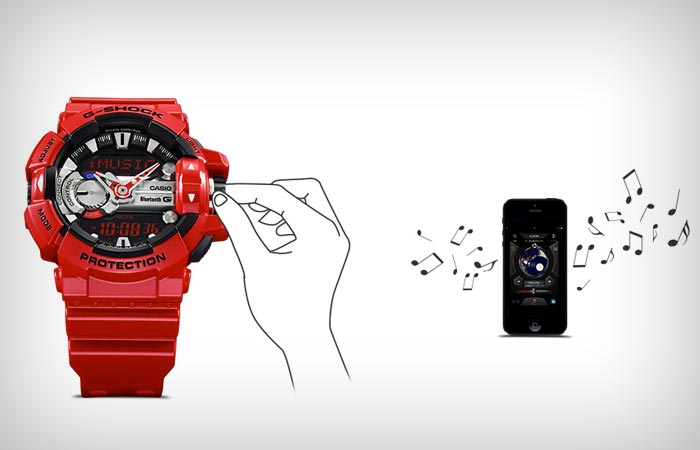