If there is one commodity that we take for granted, it is water. Did you know that, by 2025, 1.8 billion people will experience absolute water shortage, and two thirds of the world population will be living under water-stressed conditions? The message that we are sending here is that we need to start saving water. Immediately! And here is a fun and efficient way of doing it. Drop-a-Brick is an environmentally friendly innovation which is based on a rather old trick of putting a brick in a toilet’s tank to conserve water.

Of course, Drop-a-Brick is not a real brick and it will not destroy your toilet’s tank but rather improve the flushing performance while saving up to 50 gallons (or 189 litres) of water a week. More people use it, more water we can save. Of course, you will save money on your water bill too. Drop-a-Brick is actually a non-toxic pliable rubber brick filled with hydro-gel powder, a soft super-absorbent material commonly used in agriculture and baby diapers. It weighs only 9 ounces, but once expanded (when water is added) it reaches the weight of 4lbs. Drop-a-Brick suits almost any toilet tank, regardless of its size. 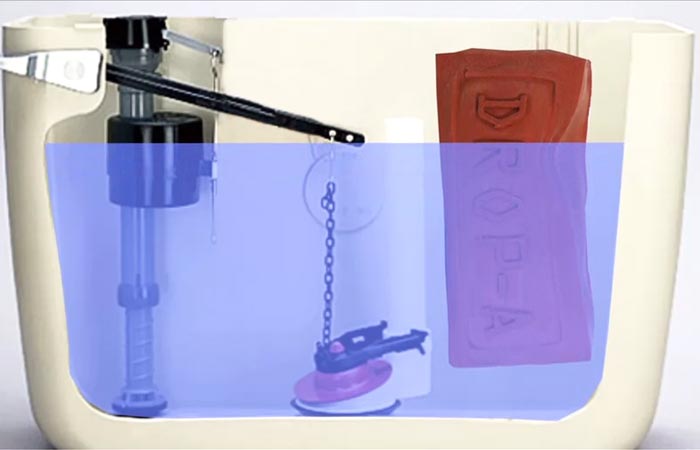 The Drop-a-Brick project was launched in an effort to fight the ongoing record-breaking drought in California which destroyed almost half a million acres of cropland, threatening fish hatcheries and depleting drinking water supplies for local communities. This is a non-profit grassroots project that can save up to 200 million gallons of water per day. Considering that toilets are some of the biggest water wasters in homes, Drop-a-Brick makes even more sense.

The Drop-a-Brick designers are currently running a crowdfunding campaign on Indiegogo and are seeking a total of $80,000 in funding. They have decided to run a so-called flexible funding campaign which means that the campaign will not succeed or fail. Any money that they raise will go towards the project. Pitch in! This is a really worthy cause.