People love sports and are constantly thinking of new ways to have fun, improve their skills and put modern day technology to the test. Since many of us don’t have the chance to go water skiing, especially at this time of the year, people have invented drone boarding. It’s a form of snowboarding where the snowboarder is being pulled by a drone. This sport was inspired by kiteboarding but it’s still far less serious as this is only the beginning.

Although it doesn’t look very impressive now, this idea has a great potential for the future as the technology is constantly improving

Droneboarding can also been compared with waterskiing. It’s actually just an idea that was probably put to the test by the people obsessed with drones. The drones are really taking over the market and people are constantly finding new ways to use them, and this is just one of the ideas. The video that has recently emerged on YouTube shows a little boy on a snowboard being slowly pulled over the snow by a quadcopter. All you need to do is attach a rope and a handle to a drone and off you go. 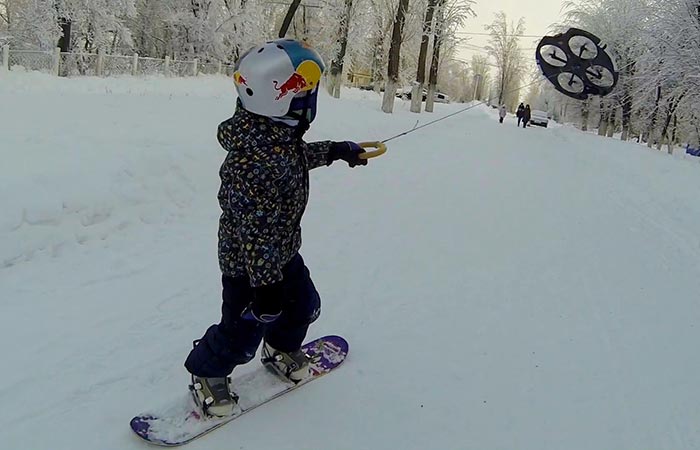 At this stage, the speed that was achieved is far from impressive, but we know how persistent and hard-working people can get when they’re trying to develop a new idea and put it into realization. The drone that was used obviously didn’t have enough power or battery charge to drag a human being around at some great speed or for a long time. However, we must consider the rising popularity of the drones. As the drones get better, so will droneboarding.

Check out the video to see how it looks: