Are you ready to take your first ride in the ultimate heavily armored SUV? Because believe it or not, the latest Prombron model by the famous Latvian SUV-tuner and military-grade assault vehicle vendor Dartz Motorz, boomingly titled Black Shark (yes, you’re right, the name comes from  the well-known Russian attack helicopter), is finally here and it’s looking pretty mean and tough all around. So, before you jump on board for the first rocky ride, you should arm yourself with some vital info – and that’s why today we bring you all the Black Shark essentials you might need before setting out to conquer the streets.

Described by Dartz boss Leonard Yankelovich as ‘the real spy car of the 21st century’, Black Shark draws on the barebones of the Mercedes-Benz GL-Class full-scale SUV but it’s packed with some tough – and handy – tech upgrades. Introduced on October 19 when the Russian Motorized Infantry celebrated its 100th anniversary, the latest Prombron is the first model in the Dartz next generation of military-grade vehicles called PRVY (ПЬРВЫЙ) which will replace the brand’s Kombat line dating back to 1998 that was featured in a number of popular movies like Die Hard 5, The Dictator and The November Man. Like its Kombat predecessors, Dartz Black Shark basics build upwards from the Mercedes-Benz GL 65 AMG platform, with a variety of available power outputs of up to 1,500 horsepower and two different engine options: a modification of the GL63 AMG twin-turbo 5.5-litre V8 or a revamped version of the GL65 AMG twin-turbocharged 6.0-litre V12 engine. 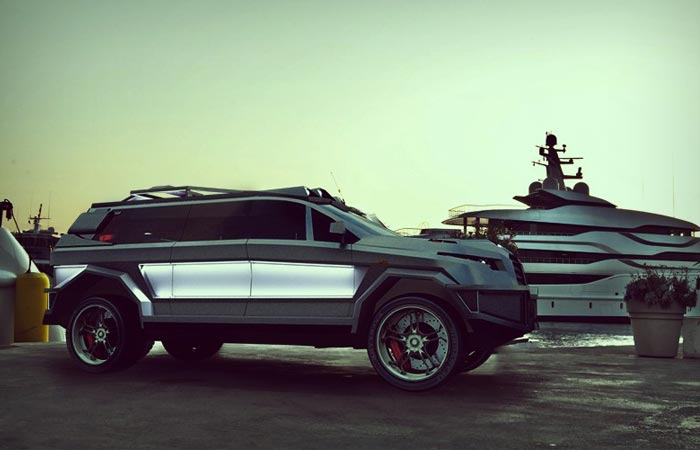 And since the inspiration for this devil of a vehicle comes from the Black Shark attack helicopter, the new SUV is quite predictably built from Kevlar and titanium and equipped with a rotating front bulletproof grille with DartZ badge and customizable monogram which means 100% protection from bullets and magnetic mines alike, and the brand accordingly included some tough armor protection that ranges up to the incredible B7 level based on the patented Soviet Kapsula technology for fail-safe comfort even in the toughest environments on the planet. The Black Shark windows come with electrochromatic tinting for maximum privacy and the door handles with a built-in anti-paparazzi shock-device blend in with the bodywork so you can’t get in unless you’re invited (or familiar with the vehicle’s specs).

The military-grade roof is sniper-resistant and in order to repel unwanted crowds and onlookers, Black Shark uses light and extremely loud sirens. For security’s sake, this mean vehicle is fitted with a few integrated cameras and a unique fingerprint and retina scanner named Golden Eye so nobody will be able to ride off in your Shark even after a decent amount of tinkering with the locks, and Vigiton driver vigilance system with a number of sensors that constantly track the driver’s psycho-physiological condition and general awareness and deliver timely alerts in case of detected fatigue are included for your maximum ride safety. Plus, you can access all the info on your Shark (such as the location, external and internal conditions) via the DartZ V2+ companion application and activate the alarms or sirens to ward off unwanted creepers prowling around your beloved car. 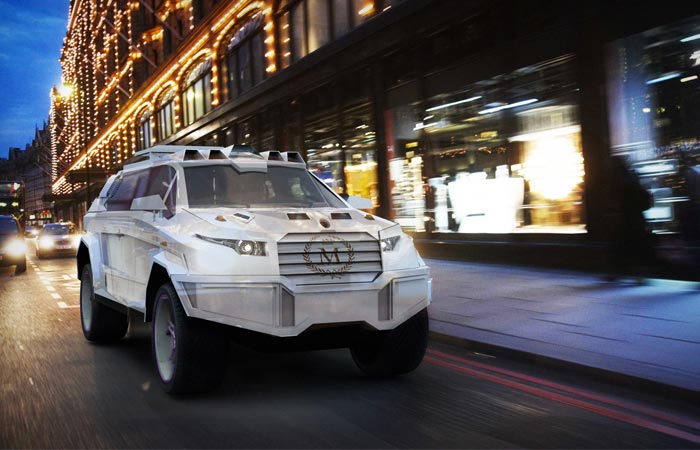 That said, Black Shark comes with the Mercedes Benz Driver Assistance package, reliable road-analyzer, distance explosive detector and signal jammer, as well as a handful of cool extras for ultimate luxury, such as the Champagne cabinet with sterling silver hand-polished flutes, humidor with a golden shisha, LTE hotspot, Playstation 4, Xbox ONE and even the Bang & Olufsen Beolit and Beosound entertainment system for a home cinema-like multimedia experience. The interior is made from alligator, ostrich, stingray, crocodile or even python leather, and the floor is elegantly lined with either sheepskin or shark skin with engraved and tanned motives dating back to the aviation history (however ludicrous it may seem, we all have our own secret fetishes). Available color options include white, gray, black, gold and camouflage but customers can request custom shades and special details (one buyer has already done so, and their Black Shark will come outfitted with Tiffany Blue exterior with Swarovski crystal-coated bonnet). That sure is a completely new definition of fancy car garb, isn’t it?

So, if you have dough to spare – and lots of it – make sure you put in your Black Shark order before it’s too late, since only ten of these ultimate road machines will be built, and five of them have already found their target market. Building on three ultimate tech and design pillars including Soviet military industry in external armoring, Russian Imperial opulence in the SUV interior design and German engineering perfection in the main platform, Dartz Prombron Black Shark SUV is truly a one-off masterpiece that will certainly put to shame any other brand that as much as attempts to live up to its standards. It’s not enough to act like a boss on the highway when you’re ride’s just a modest Bentley – with the Prombron Black Shark, you will be the firm-footed boss on the road, anytime, anywhere. 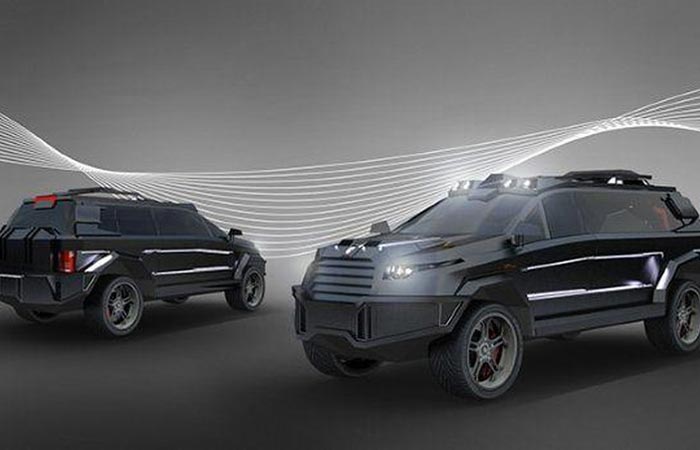