The Cove 3 House is one of those spectacular properties that have it all – the stunning location, the view, the interior. Located in Knysna, in beautiful South Africa, Cove 3 is a grandiose family residence perched atop a coastline hill. The house has been designed by architecture studio SAOTA (Stefan Antoni Olmesdahl Truen Architects), while Antoni Associates were entrusted with the interior. The idea behind the house was to maximize the site’s marvelous sea views while designing a singular living space which seemed to float above the cove.

The designers of the Cove 3 House wanted to create “the illusion that one is sitting in the landscape rather than in a room looking out into a landscape” which was accomplished by setting the roof at a level that was sufficiently high to be out of one’s line of sight from inside the house. The house seems to merge with the sky thanks to its large cut-out in the roof, while its composition allows for a lot of direct light. It has tall high-performance glass walls which reduce heat gain while its mid-screen level regulates thermal gain. 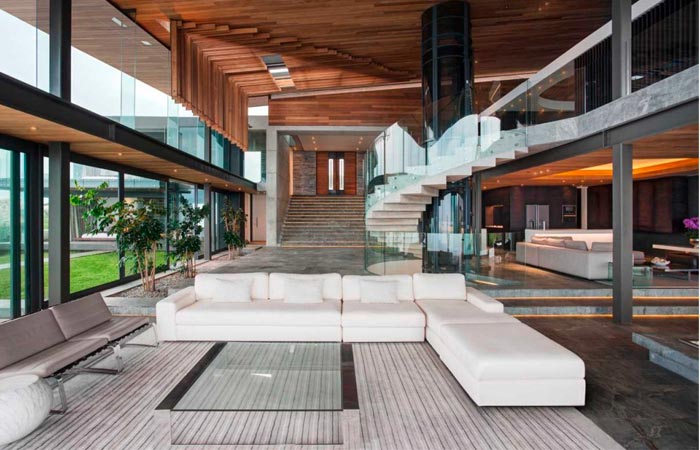 In keeping with the landscape, the architects used building materials that blended the house perfectly into its landscape like timber cladding, stone, off-shutter concrete and innovative Rheinzink stepped roof. Cove 3’s interior perfectly corresponds to its spectacular yet minimalist exterior. The focal point of the house is a grand staircase which connects the kitchen, living room and dining room, while a spiral staircase links the living room to a private lounge and a master bedroom at midlevel. Additionally, there are two children’s bedrooms in an L-shaped south-west section of the house, as well as a beautiful infinity pool, a home cinema and a guest bedroom. 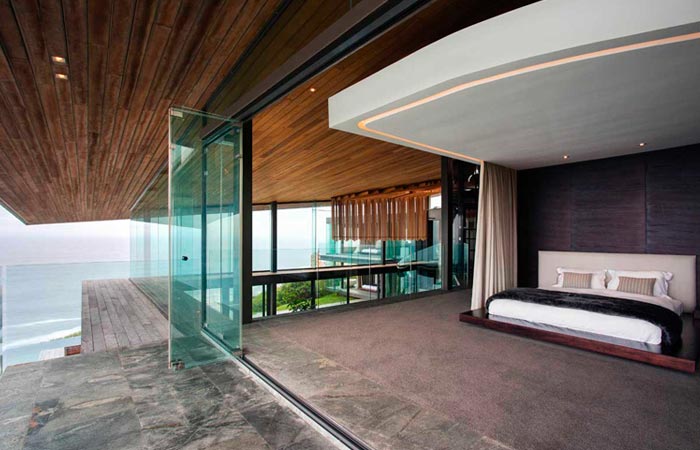 In regards to the house’s interior, it reflects its wonderful au courant simplicity and the overall design. It is uncluttered, modern, elegant and free-spirited. Mark Rielly from Antoni Associates says: “The furniture is modern, and a number of bespoke pieces were sourced from the designer’s retail outlet OKHA. A neutral palette of ivory, stone and shell complement the natural architectural timber and concrete finishes selected throughout.” 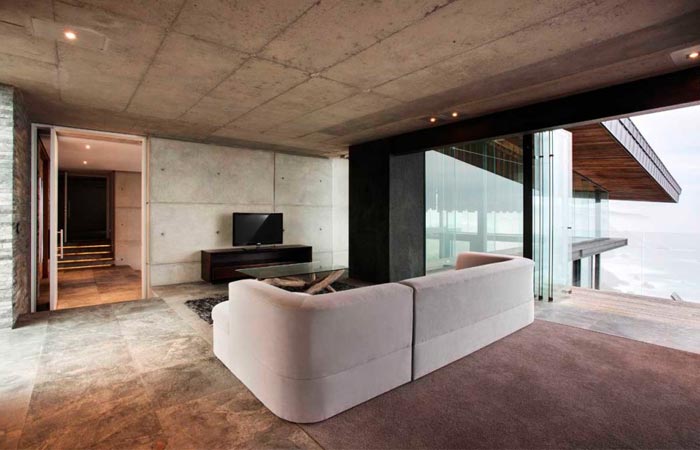 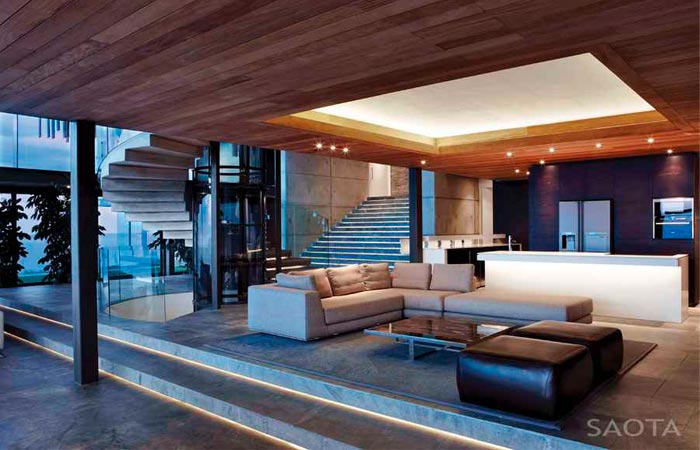 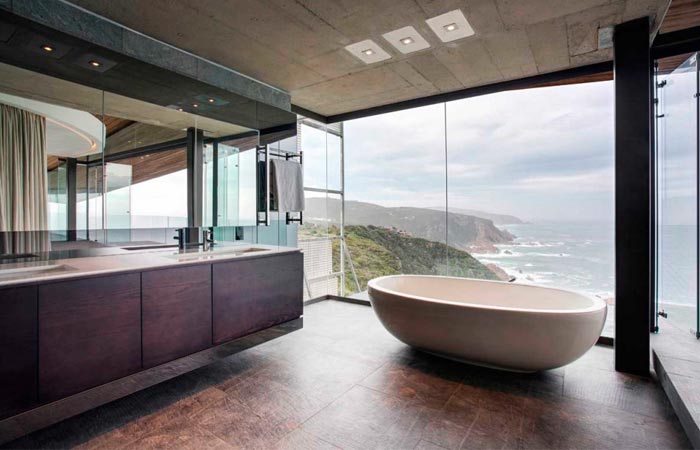 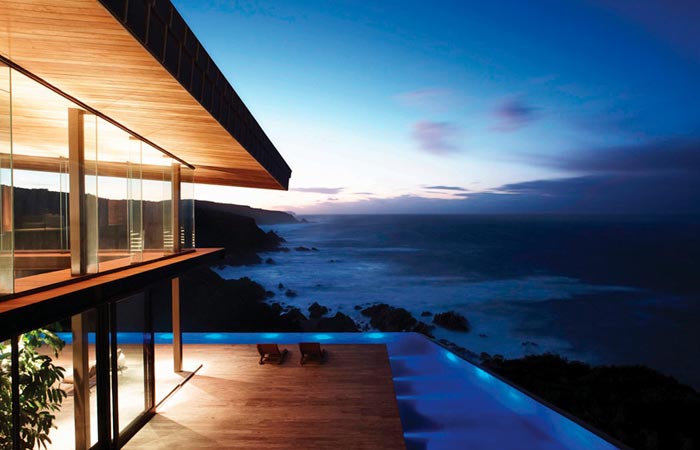 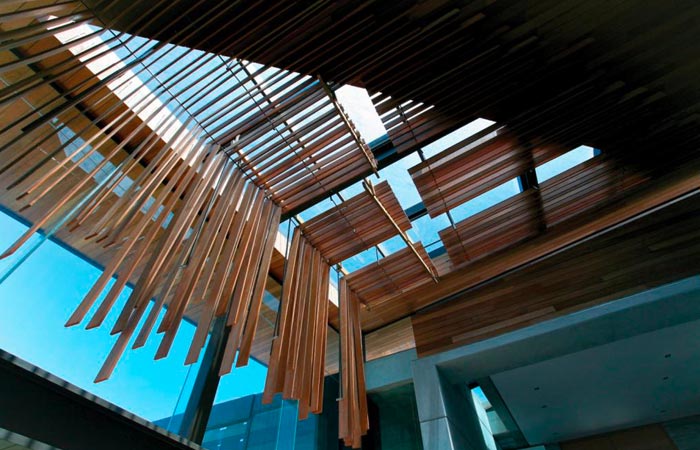 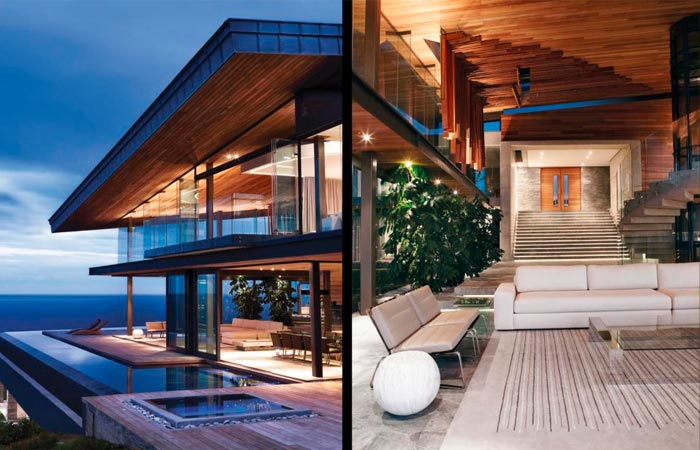