With snow falling in most parts of the northern hemisphere, chances are that cruising on your off-road bike is off the menu. However, that doesn’t have to be the case. You can get just as much of a rush thanks to the Christini AWD ii-Track Snow Utility Bike!

Designed to shred any obstacle that stands in your way, both tires of the Christini have been replaced with tracks.

Specifically developed for both recreation and military purposes, the Christini AWD’s platform allows for power to both the front and the rear of the motorcycle. It does this via the patent pending front track system that is placed between twin skis. The tracks are also designed to be used year-round in some of the most grueling conditions imaginable. Check out the video below. 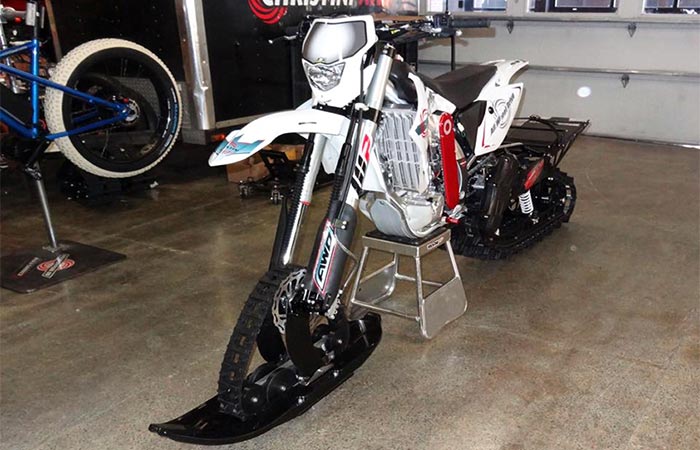 This All Wheel Drive Snow motorcycle uses a dual track system. This gives you more power and greater control.

It works by having a small snow track centered between skis. This allows for greater floatation as well as front wheel power. The track is also adjustable for various conditions; from hard packed snow, to powder, and even mud and sand. Since it is positioned in the front, it will also be used as the braking system.

The Christini AWD also has a standard dirt bike swing arm configuration. This allows for easier handling and greater control. It also makes it compatible with standard snow track systems. The Christini AWD will be available in 450 four stroke, or 300 two stroke, base models.

They should be released later this year.