Extreme sports are getting more and more popular these days and people are always trying to find a way to push the limits just a little bit further. This new Wingboard by Wyp Aviation might just be the thing that will take extreme sports to a higher level, literally. “WingBoarding” is a sport that could be compared with wakeboarding, but instead of being towed by a boat, you would be attached to an aircraft, and instead of surfing on water, you would be gazing through clouds.

Wyp Aviation is a small, start-up company based in Alabama, founded by Aaron Wypyzynski. Aaron says that he was inspired by the famous cartoon TaleSpin and the scene where the cute brown bear, Kit Cloudkicker, surfs across the clouds on a device called airfoil while being pulled by an airplane. That’s how it all started, and now Aaron is really close to achieving his dream. 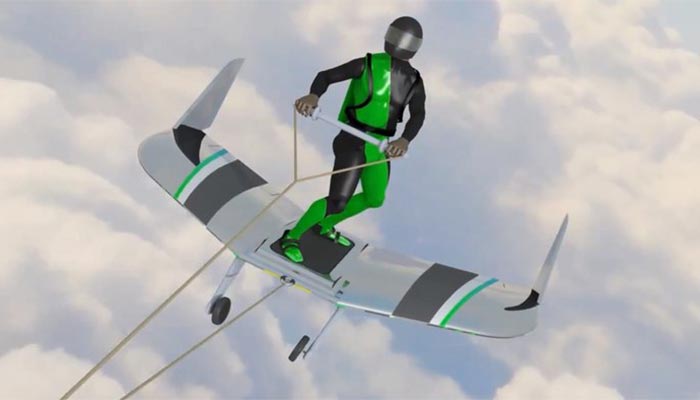 “Wingboarding” is practically wakeboarding in the air.

The “Wingboard” is designed to provide a stable center of gravity for the rider on board while maintaining maneuverability. When on board, the rider stands in an upright position and his feet are attached to the board via binding that is similar to the one that snowboarders use.

The crucial part is the rope connection. A tow rope is planned to be 10ft (3 meters) long. That rope will have two lines and it will resemble the letter Y. The lower end of the Y rope will connect to the “wingboard” and the rider is going to hold the upper part. There are two reasons behind this Y tow rope – Reduction in forces and stability. This tow rope will be able to split the forces between the rider and the “wingboard”. In that case, the board will take half of the force which will make the rider’s job easier. Because of that, the rider will have to endure only 80 lbs at a speed of 100mph. Also, both the rider and the “wingboard” will have its own parachute in order to safely descend to the ground. 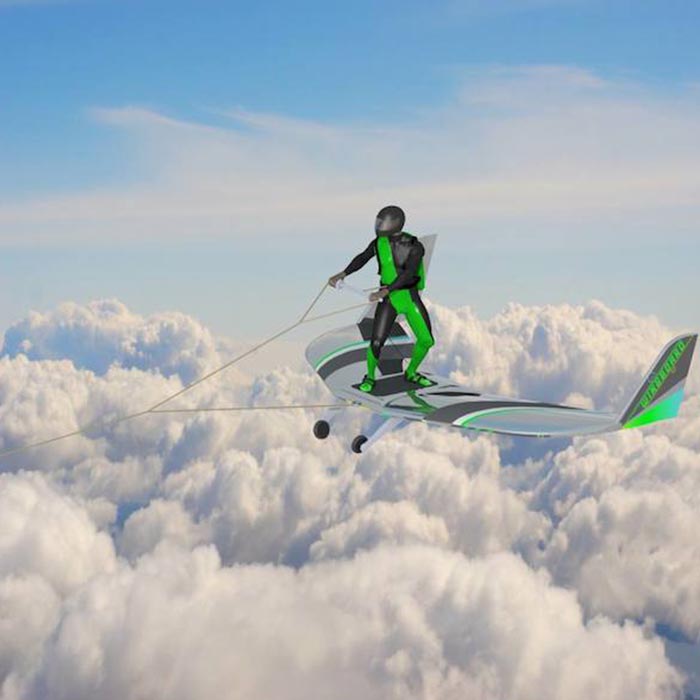 The rider is towed by an airplane using the 10 ft long Y rope.

When it comes to stability, this Y tow rope, combined with the rider, forms a triangle with 3 fixed sides. This will prevent the board from slipping into an unstable position and it will also allow the rider to easily maintain the relaxed upright position during the flight. The “Wingboard” is controlled by 2 methods. The main one is the rider’s position. The rider uses his body to lean forward and back in order to change the angle of the board. The other method consists of force sensors located in the foot bindings and on the tow bar. These sensors will allow the rider to input extra roll commands.

Wypyszynski hopes that the production will start somewhere in the first half of 2017. Of course, this is just the beginning of a unique idea, and there is a lot of work to be done here, but Aaron is very confident that “wingboarding” will one day become a real extreme sport. watch video below 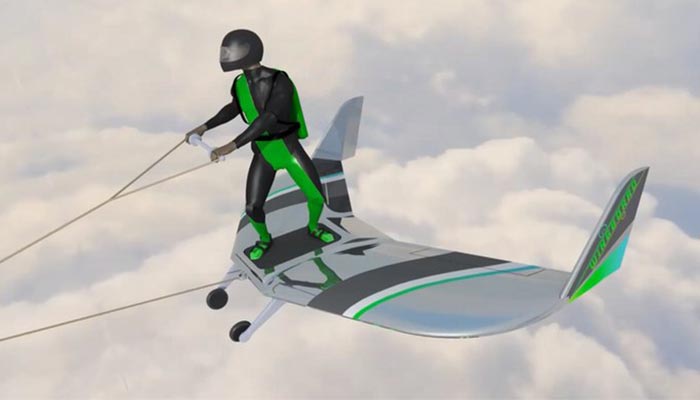 After the thrilling ride, the rider and the “wingboard” will use their parachutes to safely land on the ground.

Check out the promotional video of the “Wingboard” here.