Electric skateboards, bicycles, motorbikes, cars and even buses are not new on the global agenda of green solutions. These clean vehicles have been an affordable, eco-friendly, energy-saving and sustainable alternative to fuel-driven speed machines for years now – and now, electric transportation modes have finally moved on to a whole new level with the Lancaster Electric Bus, the world’s largest battery-powered vehicle recently revealed by Chinese automobile and rechargeable battery manufacturer BYD Motors. Let’s take a closer look at it, shall we?

After two years of project development involving some serious design endeavors, heavy engineering and construction efforts, BYD has finally introduced the largest ever electric-powered bus Lancaster (named after the city in California the passenger vehicle was designed and built in) targeting the American Rapid Transit market. Officially announced at the recently held 2014 American Public Transportation Association (APTA) Expo in Houston together with another, smaller 40-foot battery-electric Transit bus, the 60-foot Lancaster ebus packs the BYD Iron-Phosphate Battery which the manufacturer claims is 100% recyclable, fire-safe and equipped with long-cycle technology.

Tested and verified by the Antelope Valley Transit Authority (AVTA) in Lancaster, California, during the August hot-peak with full air-conditioning on and 5250 pounds of sand bags on board to simulate the full passenger load, the Lancaster electric bus sits 120 people and can travel distances of 170 miles (274 km) on a single charge. “We drove nearly 100 miles more than BYD advertises – up to 250 miles per bus charge, and we covered almost 750 miles in 24 hours! We are very impressed with BYD technology and quality,” said AVTA Board Chairman Norm Hickling. 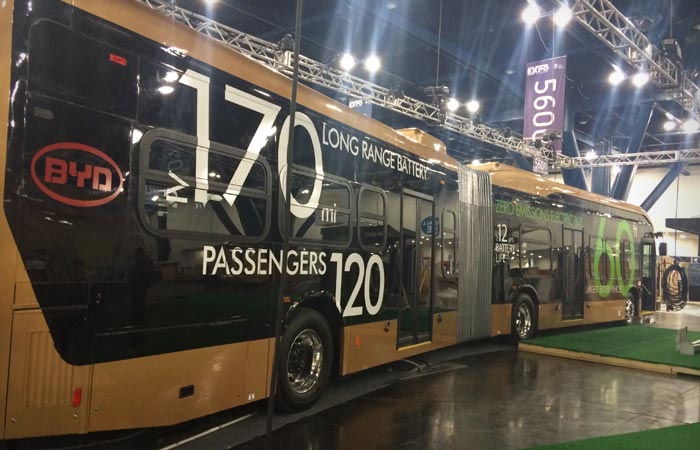 “BYD’s mission is to create safer and more environmentally-friendly battery technologies. This has resulted in the BYD Iron-Phosphate Battery, a fire-safe, completely recyclable, and incredibly long-cycle technology — the foundation of BYD’s Electric buses. These buses (Lancaster and Transit) run entirely off battery power lasting up to 24 hours on a single charge, with single off-peak charging time of 2-4 hours. No additional generation capacity is needed to be built to charge our buses at night since the grid is only 40% utilized,” stated BYD Motors Fleet Sales Vice President Brendan Riley.

As Riley pointed out, an interesting fact is that the Lancaster bus and his smaller brother Transit completed their 1500 mile journey to the Texas show at the total cost of “$200 in electricity–the lowest cost trip to the show of all buses.” The company reps say that the Lancaster electric bus was built with in-wheel hub motors, allowing for a low-floor bus design with no need for steps, which makes the bus extremely user-friendly even for the elderly and individuals with disabilities. And when it comes to the stats on environmental friendliness and sustainability in the long-run, the manufacturer’s estimates show that single BYD electric bus can save as many as 2.77 trees per day (which translates as an entire forest saved each month) with regard to the total carbon dioxide offset.

“BYD is leading the Renaissance in Transit – a rebirth of electrified transportation…but this time without miles of electrified rails, ugly over-head wires or charging stations. If you look around the show floor, there are electric buses now at every relevant transit vendor! This is a complete reversal from the Expo three years ago when we were the only 40-foot, long-range, battery-electric bus on the show floor — we are proud to say that we were one of the first and we are raising the bar again today,” said BYD Vice President Micheal Austin at the show opening ceremony.

So, will it really work? How long will it be before large electric buses like Lancaster become a regular sight on city streets worldwide? Are these electric-powered buses truly the vehicles of the future? Let’s keep our fingers crossed and hope for the best – because with the ever-growing pace of global pollution and the rapidly depleting sources of fossil fuels, green transportation modes like the Lancaster electric bus need to be precisely that milestone in public transportation that will contribute to the reduction of harmful emissions and save the planet from imploding and crashing in on itself. Go green – board a Lancaster and help save a forest this month. 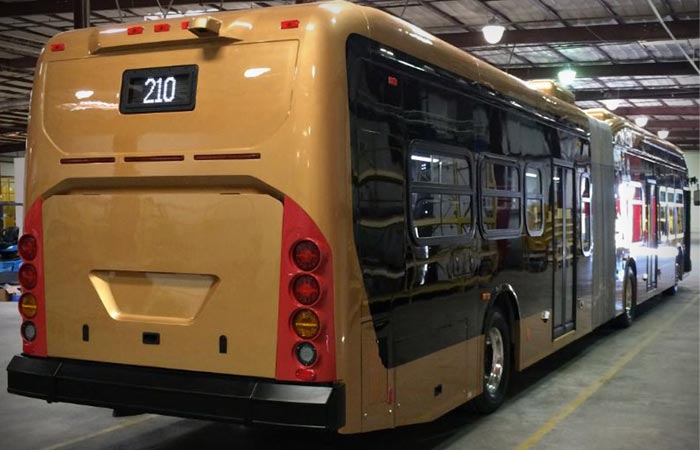