Breitling has announced their first connected chronograph and, unlike many other companies whose smartwatches are used simply as an extension of your phone, their new chronograph will make your smartphone work for it. It is called Breitling B55 Connected and it is an electronic multifunction chronograph with analogue and digital displays which is primarily aimed at aviators and the aspiring aviator market. 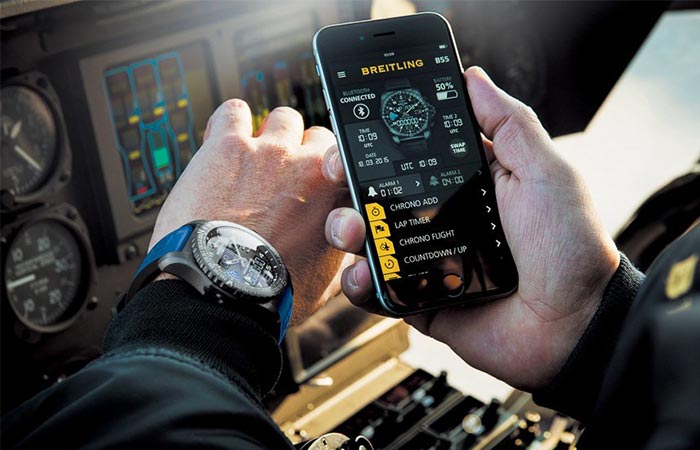 Breitling has taken a different approach when designing their latest creation by deciding not to make your watch into just another tool used for checking notifications and reading emails. Instead, the B55 Connected companion app is used to control the various features of the watch in a simplified way so your focus remains on the watch. The companion app can be used to set alarms, change time zones, set different operating parameters and adjust the display. Of course, you don’t have to use your app for any of these features as the watch has a pair of studs through which you can use these features and select them by turning the crown of the watch. Along with the previously mentioned features, this watch is also equipped with an electronic tachometer, countdown/countup system and can record flight times (take-off and landing time and date). All data recorded on the phone can be uploaded to your smartphone via the companion app. 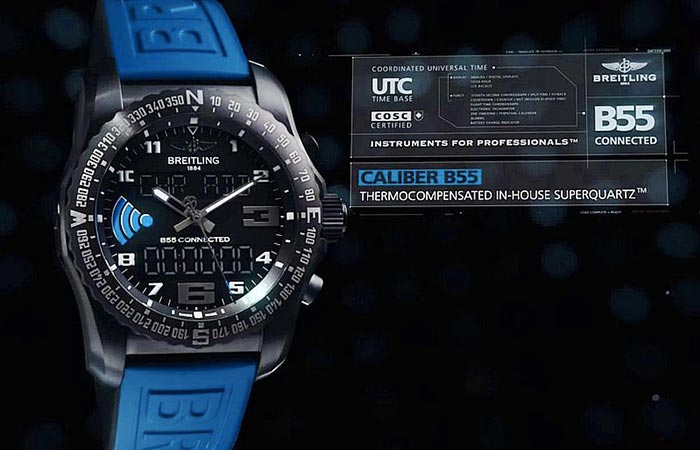 The thermocompensated superquartz makes this chronograph the most accurate one yet

The best part of the two extremely bright backlights used for two LED displays is that they get automatically turned on when the chronograph is tilted into a 35° angle. This timepiece uses the thermocompensated superquartz movement which was introduced with some of Breitling’s previous models. This superquartz movement allows for compensating for the changes in temperature which will make your watch about 10 times more accurate than the average quartz watch. A testament to the quality of this time piece is the COSC chronometer certification. All of these features will demand a lot from your battery so it was equipped with a powerful rechargeable one with a magnetic connector. 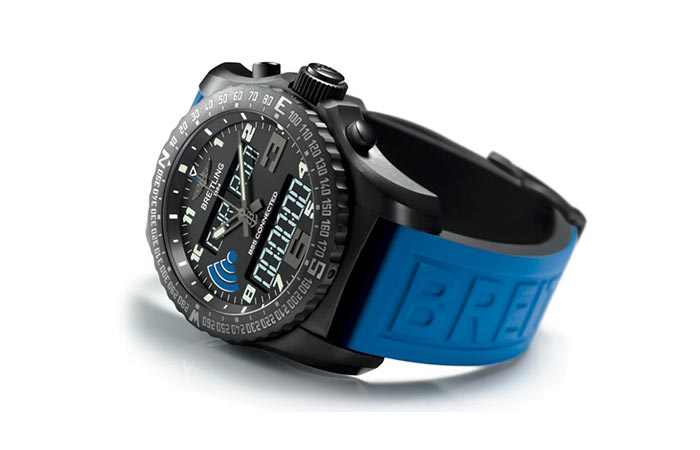 When discussing the style and materials used in the making of this watch, you can rest assured that Breitling has made sure that it uses the very best one while making it extremely appealing. The black carbon coated titanium case holds the cambered sapphire crystal over which a compass bezel has been placed. The blue wireless symbol located in the case starts the blue and black theme which further extends on the rubber strap of the watch. It’s safe to say that this technical look works really well and makes the watch extremely appealing.

As for the price of the new B55 Connected, it was not yet announced. It is speculated that the price and more details about the watch will be disclosed during this year’s Baselworld which starts on March 19th but if you are familiar with the usual Breitling prices then you are aware that it is going to be everything but modest. [via]