There seems to be no time for rest on the fast-paced market of photography and film-making gear – from retro-looking cameras, pricy minimalist configurations to affordable split camera designs, the art of image and video recording has reached its golden age. And now that one special, prestigious piece of gear has finally arrived to round off the years of camera development and take you to the vertiginous peaks of unbelievable footage quality and extreme equipment versatility: the recently released Blackmagic URSA 4K Digital Cinema Camera is the ultimate camera for professional film crews and keen solo cameramen looking to revolutionize their filming sessions.

Boasting an impressively bright ten-inch fold-out LCD screen with 1080p resolution, two separate five-inch capacitive touchscreens for settings, camera status and scopes, 12 broadcast cameras with outstanding dynamic range as well as internal dual RAW and ProRes recorders and a large upgradeable Super 35 global shutter with a 4K CMOS image sensor, this high-end digital camera packs it all in one smart unit, allowing you to record your 16:9 videos in Ultra HD quality. URSA’s modular camera turret with the sensor and lens mount assembly are easily replaceable (via removing four bolts), so you can use EF or PL lens mounts or B4 for a broadcast video sensor to suit your filming style best. Plus, this neat camera design also lets you upgrade the cam sensor to the latest tech innovations as time goes by and keep your investments relatively low when it comes to the original camera body.

Designed with professional use in mind, URSA 4K camera will show its true colors when filming high-budget films, television programs, documentaries, commercials, news conferences, music videos and anything else you throw its way. When used on set with a large film crew, URSA can be outfitted with top-quality cinema lenses, follow focus, rails, matter boxes and similar extras, so you don’t have to worry about its versatility and accessory compatibility. Optimum results are guaranteed at all times thanks to the cam’s integrated exposure, focus and audio level ranges, while the camera assist display allows you to monitor and adjust parameters independently of the DOP. Also, audio meters, controls and connections found on the audio station make sure your sound quality always stays in check for perfect film-to-audio sync. And when used by solo cameramen, URSA will do equally well as with full-scale crews – with built-in scopes, fold-out on-set monitor and internal recorder, you won’t need any additional gear because everything you need is right there at your fingertips – and it’s highly portable too. 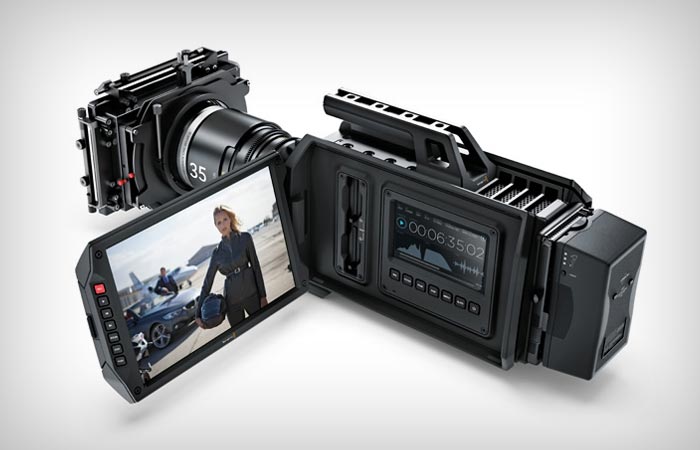 Packed in a durable machined aluminum body and fitted with a powerful cooler system, Blackmagic URSA lets you record your films with higher frame rates without adding heat to the chassis or harming the audio quality with additional noisy fans. And in case you’re filming something super-important, you don’t need to worry about running out of internal cam memory at the critical point and having to fumble around with rushed slot replacements on site – since URSA records your footage directly to CFast 2.0 memory cards, you can simply throw an empty CFast card into the second recorder to make sure you don’t have to interrupt your recording and hot-swap the media when the first card runs out.

URSA records videos in either 12-bit CinemaDNG RAW or Apple ProRes 422 (HQ), and you can also decide to capture your footage in 1080p for non-4K films. Plus, you can also connect additional external recorders or monitors via the 12G-SDI output in case you’re shooting a full-scale film scene for the big screen. And if this is not enough versatility to live up to your filming ambitions, then this will certainly change your mind: Blackmagic URSA 4K camera does away with unnecessary expensive camera cables thanks to its standard broadcast connections including two 12G-SDI outputs and compatible input, two pro XLR connections with 48v phantom power and even a timecode in/out and a LANC connector, so you can tinker around all you want without needing to buy additional costly camera wires. 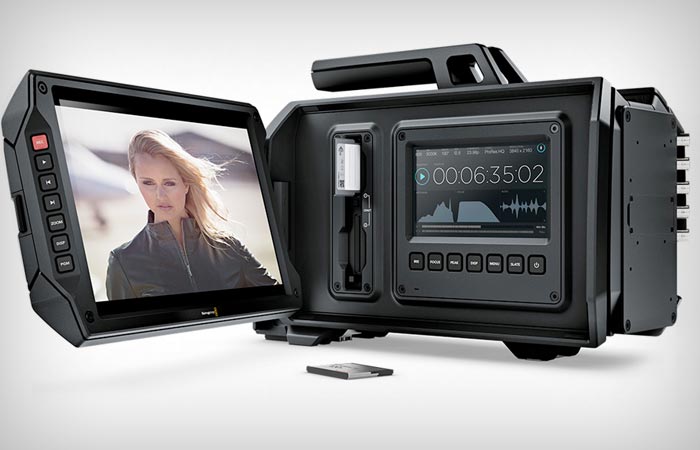 When it comes to power, Blackmagic URSA is equipped with a standard 4-pin 12V to 30V XLR broadcast power connector so you can easily plug it into external power supplies – or you can pack your digital camera with a third-party battery via several mounting points or a power transfer connector to keep juice supplies abundant and your gear completely wireless. And to make sure your URSA truly suits your changing needs, the manufacturer included multiple mounting points all over the camera body so you can connect your URSA to any add-on gear via standard tripod quick-release attaching points found on the camera bottom, or via the viewfinder connection point and/or standard 3/8-inch threaded points located on the top of the camera and its handle. Battery mounts can be bolted to the URSA rear and regular rails in the mounts can be built into the unit’s base.

When it comes to software, the Blackmagic digital camera comes with full DaVinci Resolve 11 for Mac and Windows for advanced footage editing, color corrections and outstanding image quality, which means that together with your URSA, you also get complete production and post-production procedures done at no additional cost at all.

Designed for professional and ambitious cameramen, Blackmagic URSA 4K digital cinema camera is all you need to have at hand equipment-wise when setting out for a shooting session at any full-scale film set. URSA’s numerous impressive functions are all packed in one ultra-portable and flexible camera which you can keep upgrading as future technologic solutions appear. Be a true professional; go URSA.

And if this piece of camera gear is not quite good enough for you, check out another versatile camera featured on our website – Sony 4K CAMERA is a slightly smaller but still impressively versatile handycam which allows you to shoot your HD stills and videos in 4K, and it sports a few additional useful features too. 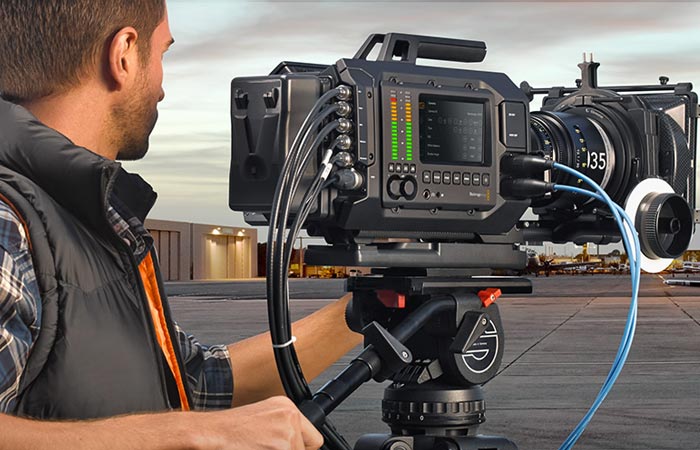