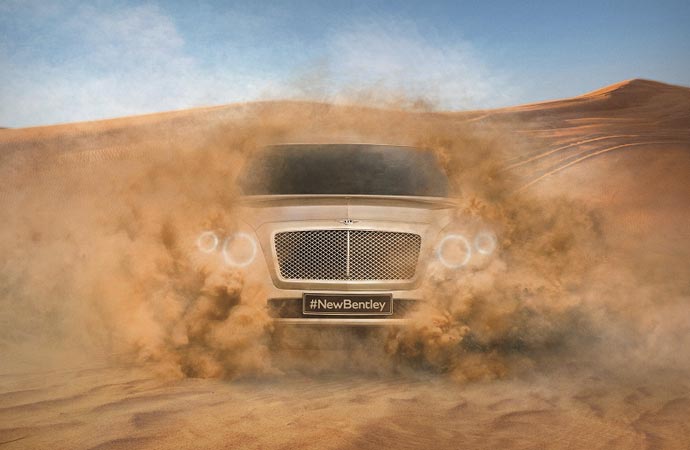 Car market is mercilessly dictating rules for everyone so it in no wonder that after Porsche some other car manufacturers who used to be very unlikely to do so, such as Bentley and Aston Martin, decided to announce that they are thinking of introducing an SUV.

Bentley introduced the plush SUV concept called the EXP 9 F back in 2012 (see the video below) and it drew varying responses. Some felt that it was somewhat small having in mind that it is both a Bentley and an SUV, some called it ugly, while some felt that it might be a breath of fresh air on  the SUV market. While we could agree, or disagree with the first two opinions, the last one is definitely true. It is a Bentley, after all.

However, the ONE picture that Bentley has presented shows somewhat different design solutions compared to the ones that Bentley presented with the EXP 9 F. The picture shows the front of the car that resembles the Continental GT far more than the EXP 9 F concept. It includes a massive grille in the middle and a pair of lights on each side with the smaller unit of each pair sitting on the outer border of the Bentley SUV’s front end. This kind of a design seems less revolutionary, but also more plausible compared to the 2012 concept especially if we have in mind the looks of the Continental GT.

And, that’s it. A blurred picture of the front end. But having in mind Bentley’s reputation, this was enough to cause havoc among car lovers. Bentley CEO Wolfgang Schreiber added more fuel to the fire stating that the Bentley SUV “will create a completely new segment in the SUV market,” and “be the most luxurious and powerful SUV.” A bold statement, but these guys might just live up to it, having in mind other models in Bentley’s line up – the Mulsanne, the Flying Spur and the Continental GT. The SUV is definitely coming with the announcements that it is going on sale in 2016. watch video below