Pescetarianism, along with vegetarianism and veganism, has been gaining a lot of popularity in recent times. The benefits of this are vast, and the impact that these individual changes are making, are, frankly, astounding. For those of you that do not know, pescetarianism is a branch of vegetarianism that still allows you to eat seafood. This has a variety of benefits, not only for yourself, but the planet as well.

Essentially, Pescetarians completely cut red meat, poultry, and pork, out of their diets, but still consume all manners of fish and seafood. They also still consume eggs, dairy, but augment their diets with a healthy intake of plant foods.

So, without further ado, we’ll get into the 6 reasons why becoming a Pescetarian is healthy!

A Pescetarian Diet Is Necessary For Your Physical Health 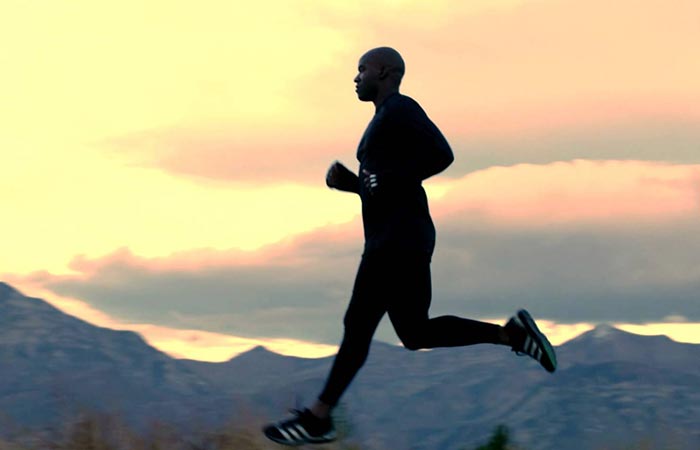 All of the minerals, vitamins, proteins, and iron, that are found in a pescetarian diet, are essential to your physical health. With plant food included, it’s a model diet, being high in fiber and low in fat.

If there is one thing that we all know, it’s that fish is healthy for you. They are abundant in omega-3 fatty acids, that is excellent for your heart and brain. In addition to this, the minerals that are found in seafood are excellent for a variety of systems.

According to Janis Jibrin, M.S., R.D., who authored a book called “The Pescetarian Plan”, “following a Pescetarian diet could potentially lower your risk of heart disease, type 2 diabetes, dementia, erectile dysfunction and depression.”

Fish are also rich in vitamins, which include B-Complex vitamins, Vitamin D and Vitamin A. These vitamins are known to be extremely beneficial for the maintenance of your nervous system, acts as a component for bone development, and leads to healthy vision.

Of course, a Pescetarian diet goes even further into what you need, since fish and seafood is high in iron, and contains all of the protein that you need.

It has also been shown that adopting this diet could also help decrease the risk of stroke, osteoporosis, obesity, arthritis, high blood pressure, and certain types of cancer.

It Will Increase Your Lifespan 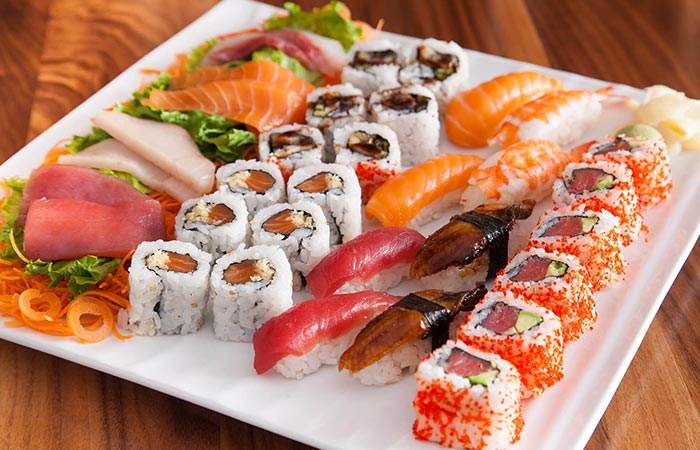 Sushi is a common item found in the pescetarian diet. It’s exceptionally high in Omega-3 fatty acids, that is great for cardiovascular and neurological health.

Since information is so freely available on the internet, we have become more aware of the dangers that eating red meat, pork and poultry, imposes. As a matter of fact, eating these foods are associated with decreased health and increased mortality rates. So, if you want to live longer, pescetarianism is the way to go.

The Health Professionals Follow-up Study, and the Nurses’ Health Study, that observed the diets of 37,000 men and 84,000 from 1986 to 2008, and 1980 – 2008 respectively, have found that “substitutions of 1 serving per day of other foods (including fish, poultry, nuts, legumes, low-fat dairy and whole grains) for 1 serving per day of red meat were associated with a 7% to 19% lower mortality risk. [They] also estimated that 9.3% of deaths in men and 7.6% in women in these cohorts could be prevented at the end of follow-up if all the individuals consumed fewer than 0.5 servings per day (approximately 42 g/d) of red meat.”

Hot dogs, an American favorite, has also been shown to be extremely carcinogenic (cancer-causing). It, along with bacon, sausages, and other processed meats, have been added to the World Health Organization’s highest classification for cancer-causing products. Essentially, it is on the same level as radioactive substances, smoking, and mustard gas.

Becoming A Pescetarian Helps Save The Planet 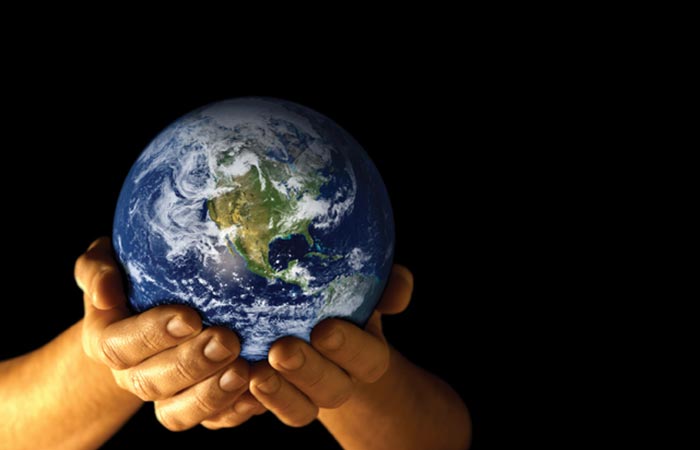 We, in a very literal sense, hold the world in our hands. Our individual actions have a global impact.

Factory animal farming, without sugar coating it, is a blight on the face of the planet. We are at our epitome of technological advancement, but our planet is busy dying. One of the major factors, is the systematic breeding of animals for slaughter. This isn’t conjecture; it’s a fact.

Factory farming contributes to 37% of global methane emissions. Methane has 20 times the global warming potential of CO2. It also leads to deforestation, which makes no sense, because we need trees to produce oxygen so that we can breathe. In the US alone, over 260 million acres of forest has been cleared to make room for crop fields, which are used to feed livestock. However, it is a global practice that is not just confined to the US.

According to Earth Talk, for every hamburger that came from an animal raised on rainforest land, approximately 55 square feet of forest was destroyed.

The question then becomes, what can I do? Well, you can adopt a Pescetarian diet, and your individual action will have a direct and measurable impact.

By Becoming Pescetarian You Stop Being A Part Of Animal Cruelty 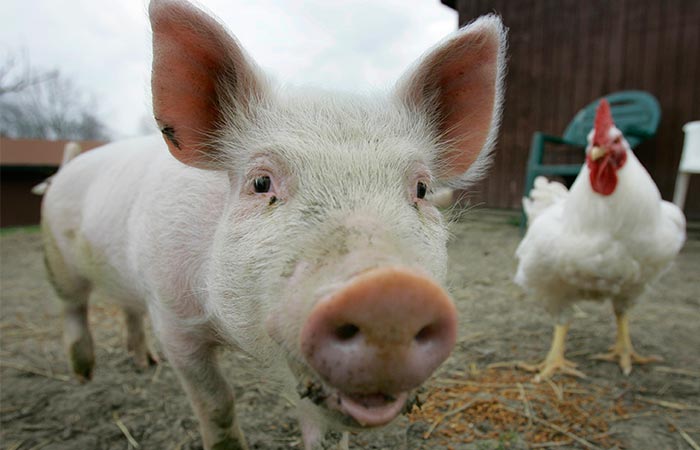 Farm animals are conscious beings that have a plethora of emotions. By becoming pescetarian, you are actively helping to stop animal cruelty.

Paul McCartney was quoted saying, “If slaughterhouses had glass walls, everyone would be vegetarian.” We could not agree more.

For some time now, there has been videos roaming around on social media that show the horrors of slaughterhouses. To put it plainly, these animals suffer a cruel and painful death, and rarely, are humane practices put into play.

From electrocution, to starvation, to having their throats cut while still conscious. It leaves a bitter taste in one’s mouth to write this, but it is a fact that cannot be ignored. We have been conditioned to look the other way, and the most dangerous phrase in the English is, “We have always done it this way.” Stand for change, and empathy.

If you have a pet, what differentiates them from livestock? Absolutely nothing. They are conscious, they have emotions, and they can feel pain. By adopting pescetarianism, you do your part in stopping animal cruelty. 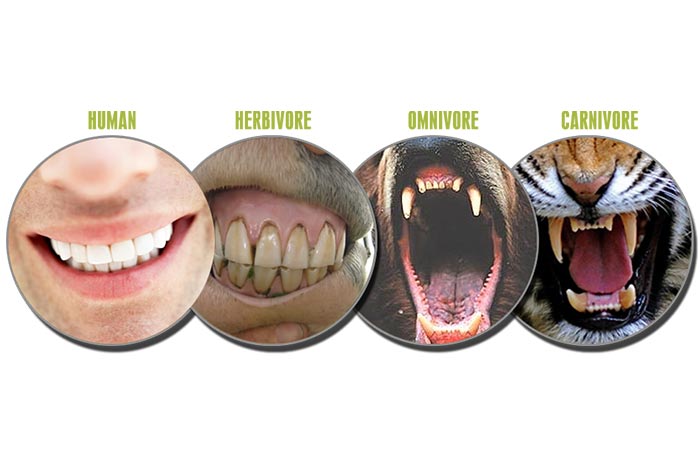 You can clearly see the difference between the teeth of a human and a carnivore. We aren’t meant to, anatomically, eat meat.

Since we consume a variety of plant and animals, we have been dubbed to be omnivorous creatures, but this is completely anatomically incorrect. Our teeth, jaw, and nails prove that we are not actually supposed to eat meat.

As opposed to a true carnivore, we lack the long canines, and sharp tough nails. We can’t tear raw flesh using our hands, nor can we penetrate hide with our teeth. In addition to this, carnivores have small intestinal tracts, and strong stomach acids, that act to digest the meat and kill any bacteria that may be present in the raw meat. A human eating raw meat is bound to get ill from some form of bacteria.

We also have flat molars that aren’t found in carnivorous animals. These molars are used for grinding plants, instead of tearing flesh.

By becoming Pescetarian, you are following a diet that is more in tune with your natural anatomy. 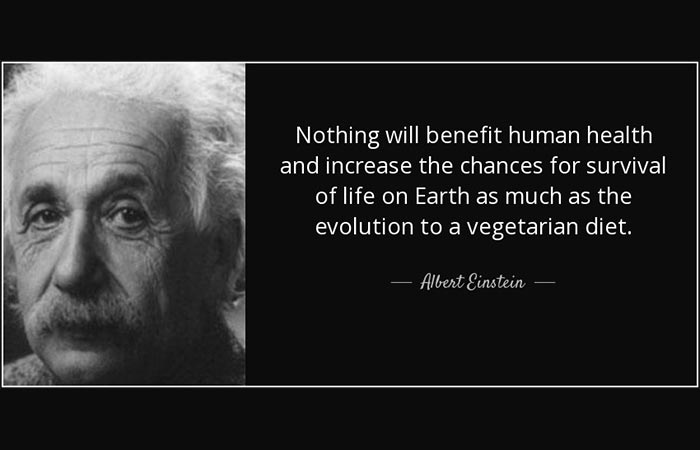 Albert Einstein was a famous vegetarian. Even if you don’t go full vegetarian, a pescetarian diet still has all of the benefits.

Since pescetarianism is a branch of vegetarianism, we thought that we should add the fact that there are many successful individuals that have adopted either a vegetarian, or pescetarian diet. The list includes, Thomas Edison, Nikola Tesla, Leonardo da Vinci, Albert Einstein, Benjamin Franklin, Paul McCartney, Franz Kafka, and many others. Why did they do this? Because they understood that their individual actions could make a difference on a global scale.

With all of these benefits, you’ll look better, feel better, become healthier, and you will do you individual part in helping stop a global catastrophe. What better reasons than that to become a pescetarian?