We have already mentioned that he performed many of his wrongdoings while he was playing for Manchester City, getting on the nerves of the team’s manager Roberto Mancini. This may come as a surprise having in mind that Mancini gave him a fresh opportunity after Balotelli’s not so praiseworthy behavior in Italy. However, he did not seem to be very thankful to the manager. One of his misadventures resulted in a $400,000 fine. This massive fine came because Balotelli breached the quarantine rule often present in football clubs. Basically, this means that players can’t go out the night before a game for numerous reasons including not getting drunk, hurt, or simply unprepared for the physical efforts awaiting them the next day. Well, not only did Mario go out, but he also went to a strip club at 2 am. $400,000 for a night out and I think it’s safe to assume that he would do it again.

DEALING WITH A BULLY

However, for some Balotelli is a hero. A young boy approached him to ask for an autograph in 2010. He asked the boy why he wasn’t in school and the reason he got was that the boy was being bullied. Outraged, Balotelli went to school with the boy and we can only imagine what he said to the bully. He even had a few words with the headmaster about this. Here it is safe to assume that the boy was not bullied again.

CHEATING ON A GIRLFRIEND WHILE SHE’S IN THE HOUSE

Women like bad guys and rich ones as well. Well, Mario is both. Raffaella Fico was his supermodel girlfriend for a while and they had a troublesome relationship that even included threats of suing from both parties. Balotelli even asked for a paternity test to prove that Fico’s daughter Pia was really his daughter as Fico claimed. Well, the test came back positive. However, there is another reason why Raffaella Fico might be a bit cross with the striker. Another supermodel named Chloe Evans said she’d had an affair with Balotelli back in 2011. On one occasion they are said to have had sex while Raffaella was sleeping in the same house. This does make a woman a bit angry, doesn’t it?

A BIG BRONZE ME

Mario scored a great goal in the semifinals of the Euro 2012 against Germany. In fact, he liked it so much that the decided to have a full-sized statue of himself built in the exact pose that he took to celebrate the goal. First of all, have a look at the pose

and then imagine it in bronze and inside his own house. Yes, this might actually be a bit too much. The pose was trolled all over the internet.

MISSING A CHANCE BY OVERDOING IT

Another feat with Mancini who must have cursed the day he chose to give Mario another chance. During a game in the US versus the LA Galaxy, Balotelli had a great chance to score a goal. He was all alone, just several feet in front of the goal keeper and, as if he wasn’t enough, there was even his teammate Edin Dzeko there to help him if needed. And he missed. Ok, that happens even to the best, you’d say. Well, it does, but he seemed to have been begging for it. Look at the video that made even LA Galaxy fans angry. Total disrespect of… well, virtually everything and everybody there

Expectedly, he was substituted within the next minute.

LETTING HIS TEAM DOWN BY BEING BRUCE LEE

For those of you who are not very familiar with soccer, Kiev is not a team that can expect to beat Manchester City, even more so when it is a matter of passing to the next stage of a European competition or finishing your season. Well, this happened in 2011 when Manchester City, much to the dismay of their fans lost 2 – 1 on aggregate against Kiev in the Euro League. The Ukrainian team fought respectably well and Balotelli left his teammates stranded since he was sent off. Why? Well, during the game, he thought he might try a bit of a ninja move and ended up fouling a Kiev player Goran Popov with a move more suitable for American Wrestling – only it was real. Have a look at it in the video below.

NO PARKING RULES FOR MARIO

His happy-go-lucky style transfers to all aspects of life. Parking rules in England, for example. Or, as Mario would say ‘what parking rules?’ Apparently, while playing in the Manchester City, a team we feel sorry for now, he parked just about anywhere, thus reaching the parking fine of more than $10,000. Additionally, his beautiful white Maserati was impounded exactly 27 times.

MAKING HIS OWN FANS FURIOUS

We have already mentioned that he played for both Inter and AC Milan and that the two teams are archrivals. The fans of Inter got terribly offended several times, but his most outrageous move was appearing on a TV show in Italy in an AC Milan shirt. – while he was still playing for Inter. Why would anyone think it is a good idea to do that?

A MANSION WITH A QUAD BKE RACE TRACK

Obviously, money is not problem for the young star. He uses it for, among other things, renting housing. Wonderful, exotic and lavish mansion housing. With stylistically landscaped garden which Mario thought would look a lot better if it would be turned into a quad bike race track. Nice move.

A PROBLEM FOR JOSE MOURINHO 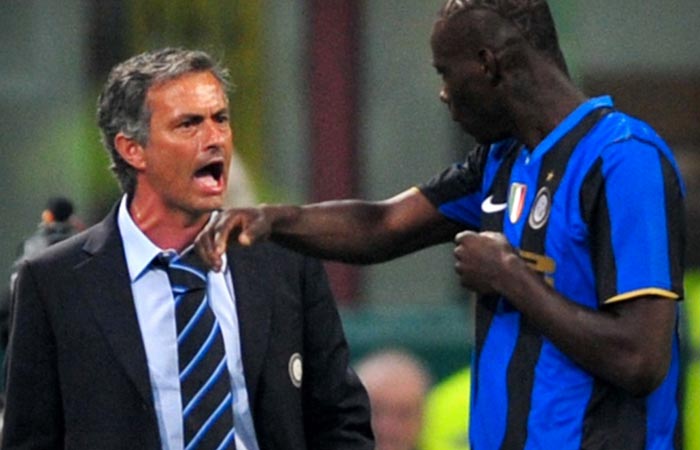 Even though the several times mentioned Roberto Mancini had terrible problems with Balotelli, other managers weren’t luckier, one of them being even Jose Mourinho, the Portuguese master of tactics. Here is a gem he decided to share with the world.

“I remember one time when we went to play Kazan in the Champions League. In that match I had all my strikers injured. No Diego Milito, no Samuel Eto’o, I was really in trouble and Mario was the only one.

“Mario got a yellow card in the 42nd minute, so when I got to the dressing room at half-time I spend about 14 minutes of the 15 available speaking only to Mario.

“I said to him: ‘Mario, I cannot change you, I have no strikers on the bench, so don’t touch anybody and play only with the ball. If we lose the ball no reaction. If someone provokes you, no reaction, if the referee makes a mistake, no reaction.’

So why is he still getting hired? He is just that good a player.