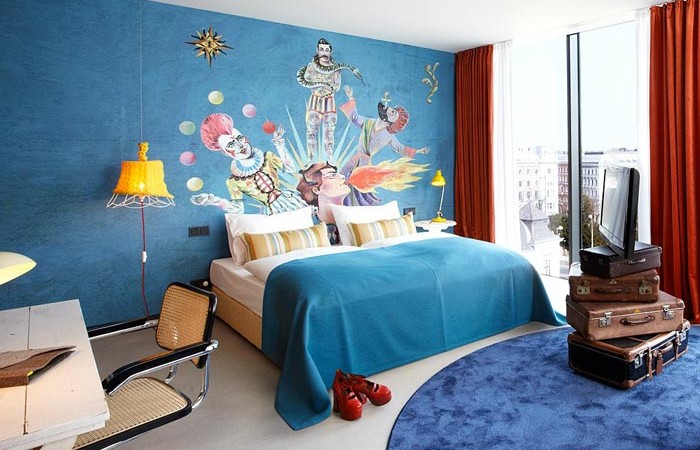 If there is one word that immediately presents itself when somebody mentions the city of Vienna, it must be elegant. Other adjectives spring to mind too – timeless, sophisticated, and graceful. However, Vienna is not entirely classical, historical, and somewhat stern in appearance. There is a wonderfully artsy and whimsical part of it called MuseumsQuartier (the Museum Quarter), and in it a hotel called 25hours Hotel Wien. And trust us, you have seen nothing like this hotel! It is colourful, vibrant, jolly, and surreal. The 25hours Hotel is ‘Alice in Wonderland’ meet ‘Cirque du Soleil’ in the Viennese hospitality world.

The 25hours Hotel Wien was designed by Vienna-based firm BWM Architecten und Partner, while design company Dreimeta from Augsburg was entrusted with interior design. The hotel is situated in what used to be a drab, forgotten 1970s building, which was transformed into a contemporary facility fitting of the 21st century. “We have created an overall concept which enriches Vienna’s hotel scene, clearly accentuates the immediate surroundings and offers and ideal starting point for exploring this fantastic city”, says CEO of the 25hours Hotel, Christoph Hoffmann. 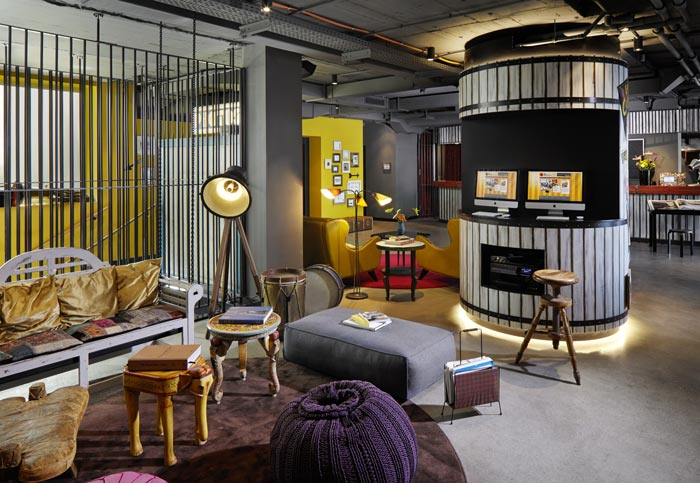 Initially, the hotel started out with 34 suites, but a total of 185 rooms were added over time. The rooms are an eclectic mix of circus aesthetics, fairytale feel, luxurious comfort, and modern amenities. But, we’ll get to them a bit later.

The hotel is brimming with custom made features – from deep-pile carpets and shower fixtures to a beautiful wall mural by artist Olaf Hajek in the hotel’s 2,700-square-foot spa. Apart from 219 rooms, the 25hours also boasts a restaurant seating 140, the Dachboden Bar with a million-dollar-view of Vienna, an outdoor dining area & bar for 100 people, a conference centre, the aforementioned sprawling sauna with steam bath aptly called Mermaid’s Cave, own car park, complimentary Wi-Fi and rental bicycles. 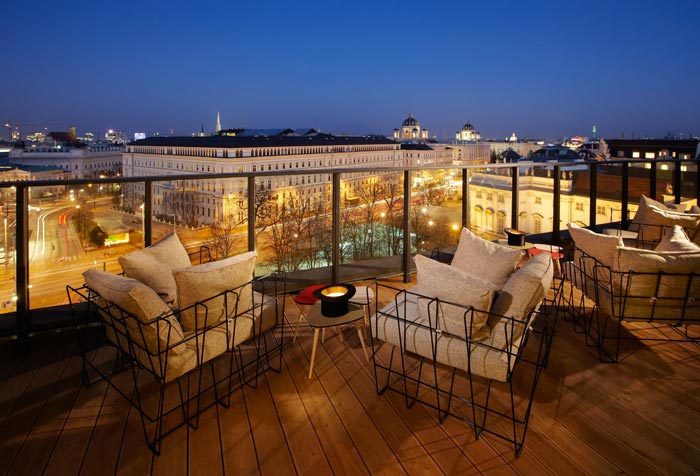 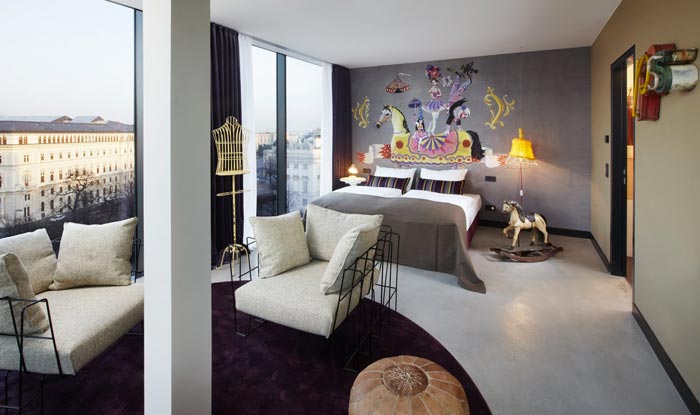 We have to say a few words about the hotel’s restaurant called 1500 Foodmakers. The restaurant is inspired by its hip counterparts in Santa Monica, New York and Los Angeles. It has an authentic take on the contemporary Italian cuisine, and, to quote the hotel’s Head of Brand & Communications, Bruno Marti, “the restaurant’s philosophy is simplicity combined with quality”.

Its décor is another interesting feature – true to the hotel’s original style, the restaurant is also a mix and match of styles and features. There are wooden pedestals contrasted by stone floors, fabric-partitioned booths, velvet-covered chairs and plain benches, zinc and wooden tables…

In spring and summer, the restaurant opens up to include an outdoor dining area and a beer garden. 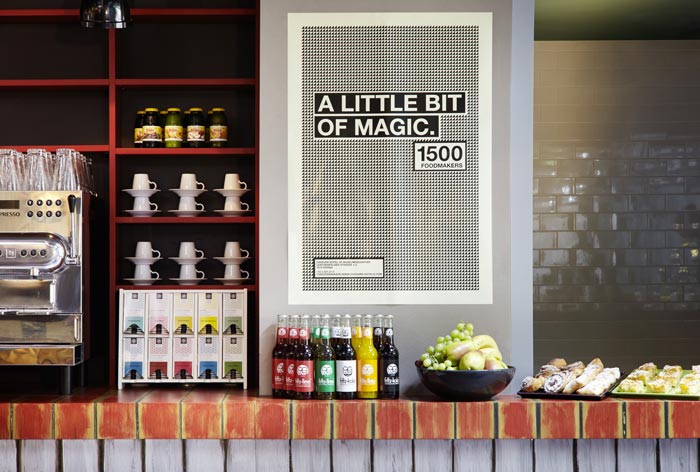 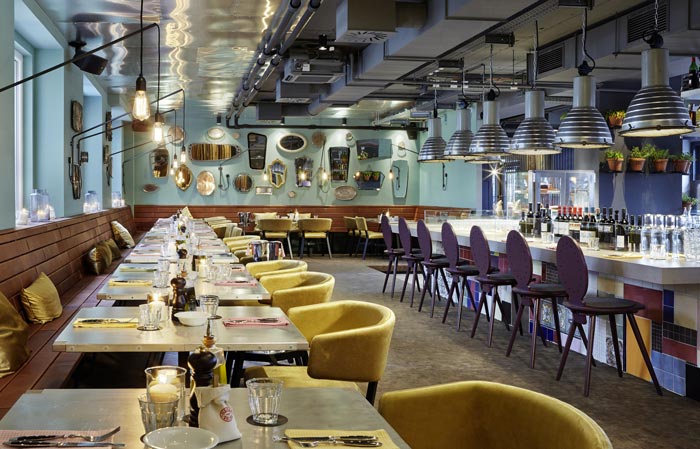 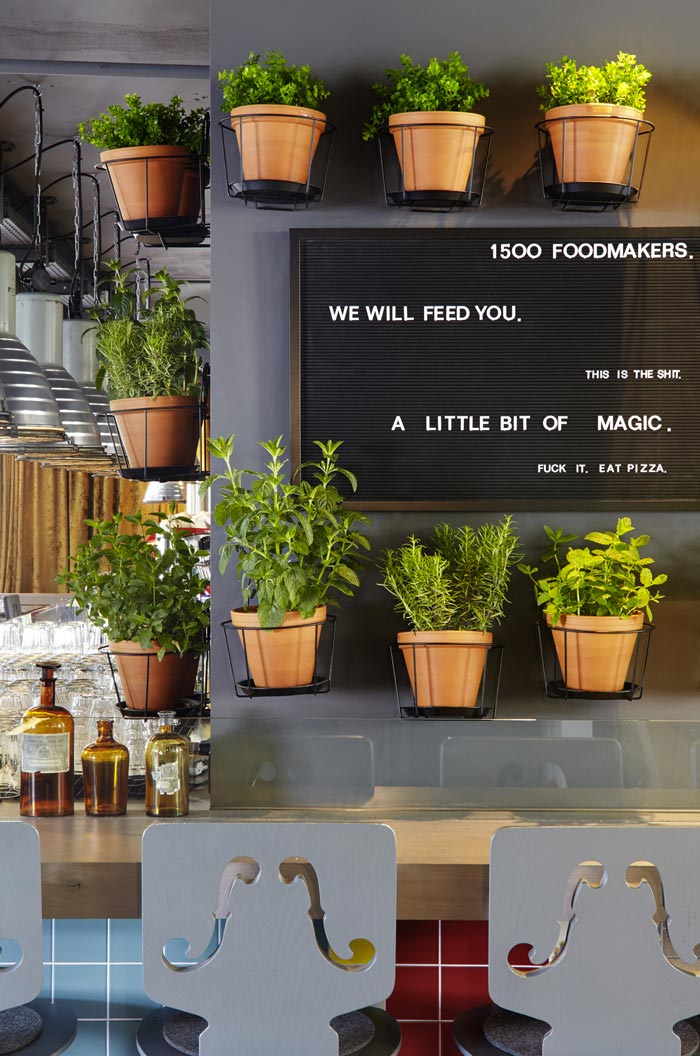 Now, for the rooms. Brace yourself since they are so delightful and authentic that you won’t be able to resist exploring every single detail in them. Their size varies from 22 square metres (so-called ‘M’ rooms) to 50 square metres (L rooms), which come with a freestanding bath, and a wonderful view of the park.

In them, you will find everything you might need for a comfortable stay – a flat screen TV, a safe deposit box, iHome, LAN port, air-conditioning, complimentary Wi-Fi, and a minibar.

The suites – all 35 of them – also come with fully equipped kitchenettes. While you rest and take in the views of the Vienna skyline, the wall images of ringmasters, fire eaters, clowns, and merry-go-rounds will keep you company.

The circus images are intentional since, with its interior design, the hotel is paying homage to a 200-year-long circus history in Vienna (the first circus in Vienna was opened at Prater Amusement Park in 1808). Designer Armin Fischer from Dreimeta, the company which was in charge of designing the hotel’s interior, says that his team “trawled countless flea markets, hunting and gathering (antique) juggling clubs, trapeze wires, chairs and desk lamps” to depict the era and the circus life as truthfully and closely as possible.

In today’s day and age, no hotel would be complete without a gym, and 25hours is no exception. Apart from the hotel’s well-equipped gym, there is a small outdoor gym in Weghuberpark right next door, while the hotel guests can also use complimentary jogging corner. Should you fancy a bicycle ride, no problem. You can borrow one from the hotel’s partner Electra and the rental is also free of charge. 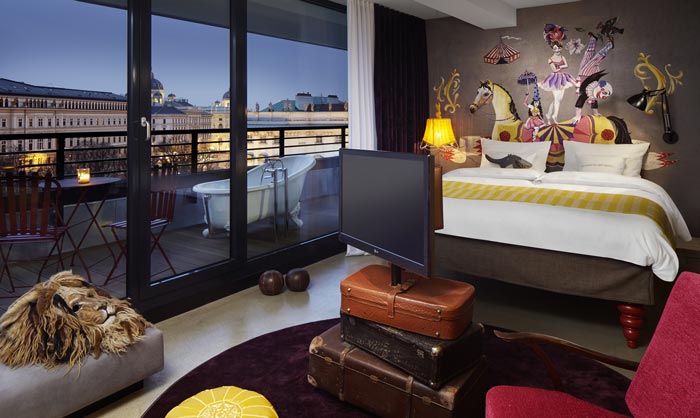 As the hotel’s General Manager, Fanny Holzer, puts it:

This is a real luxury hotel. It may not have gold-plated taps and butlers, but it does have a unique feel, a five-star view, and both cultural and tourist attractions within striking distance.

And a lot of character to boot, if we may add! watch video below 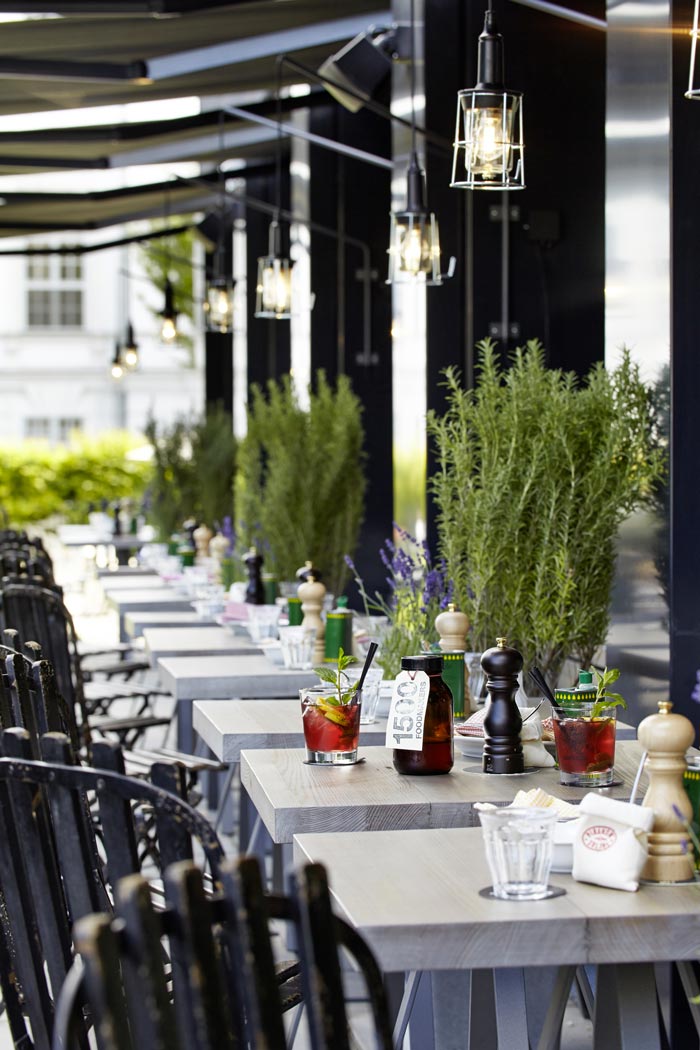 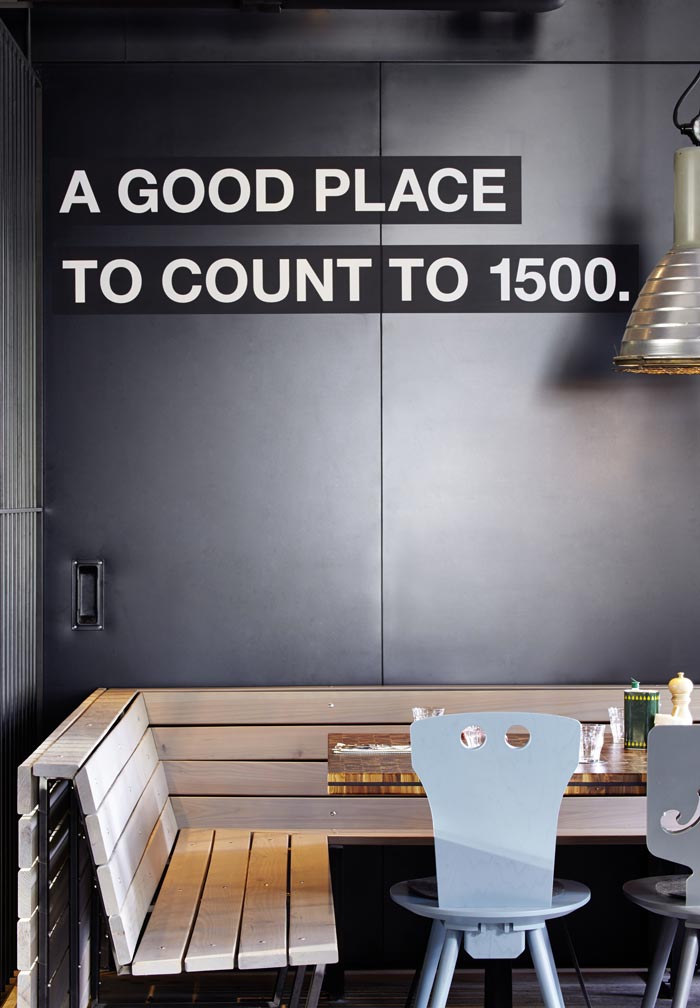 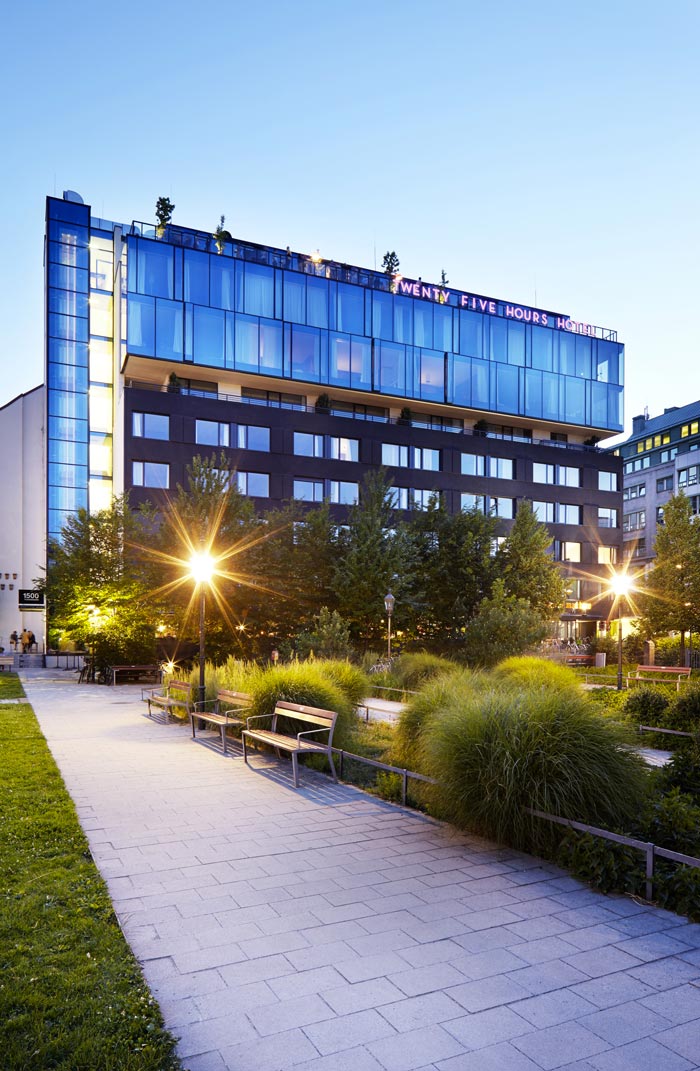 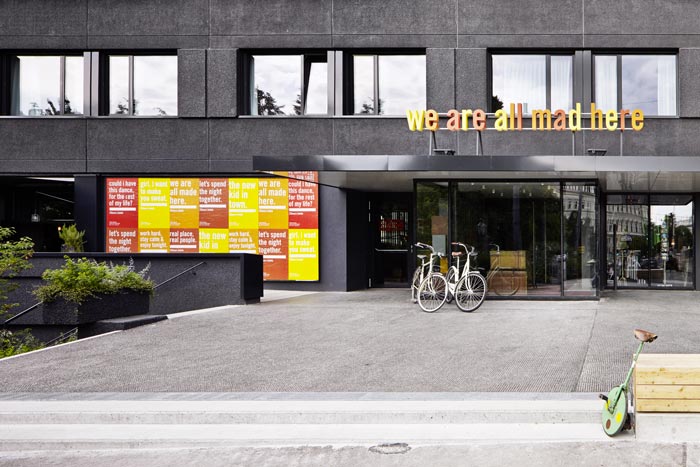 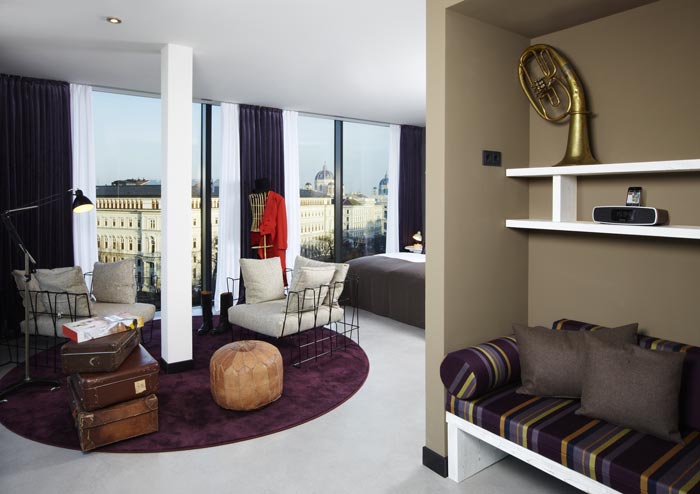 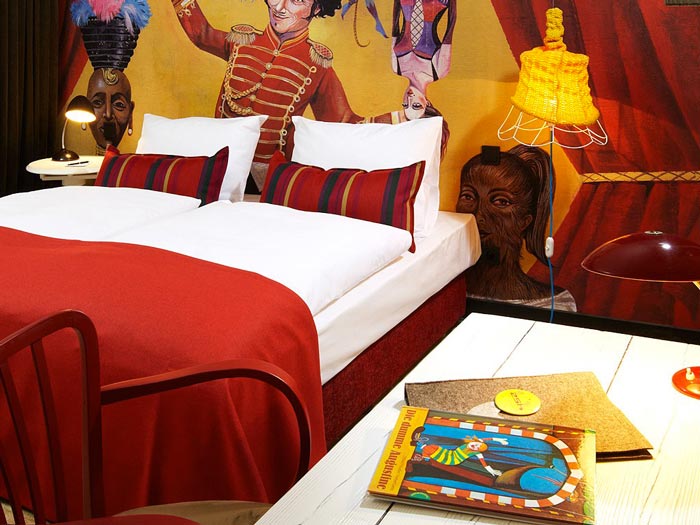 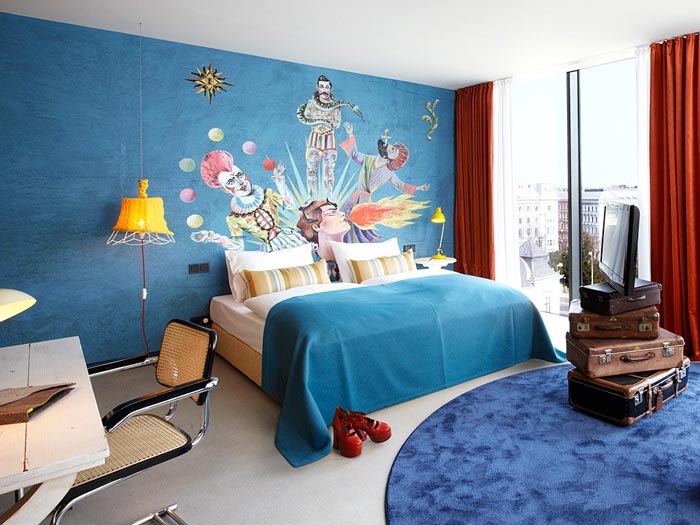 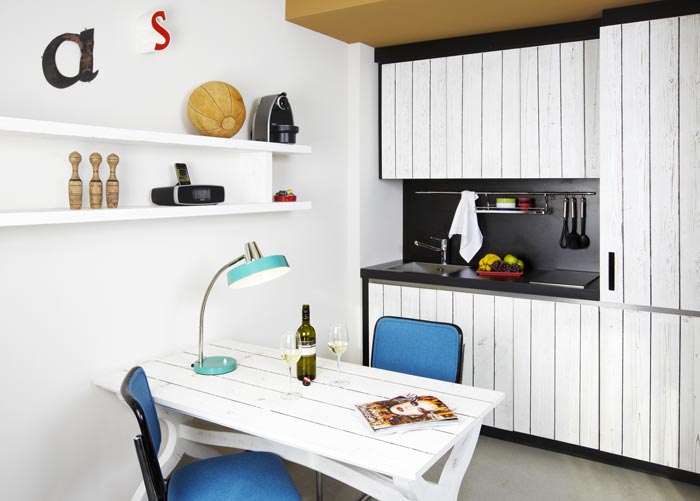 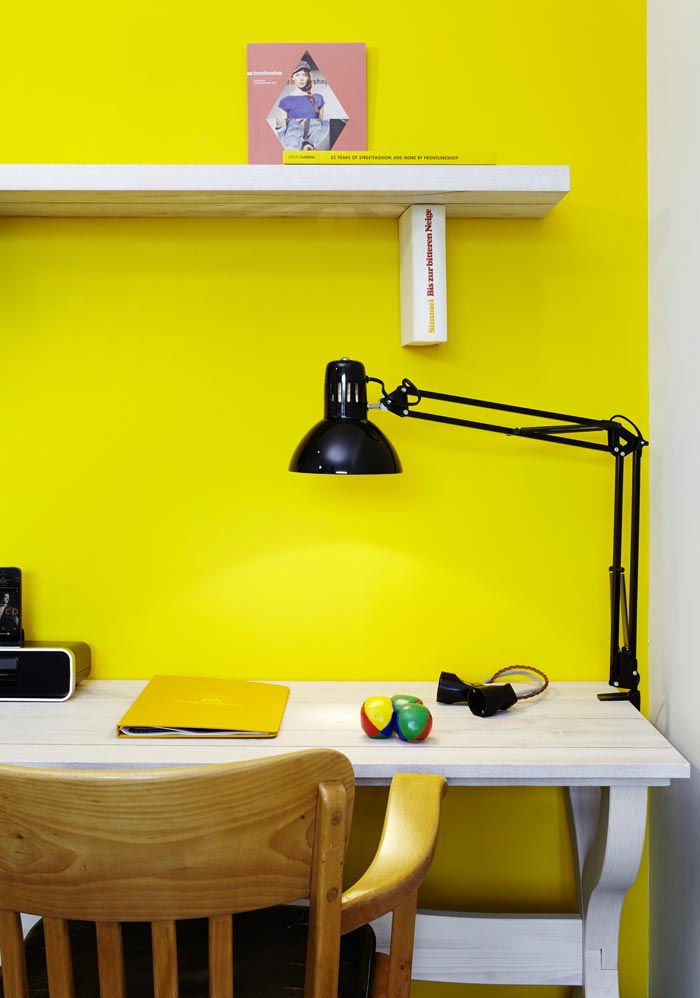 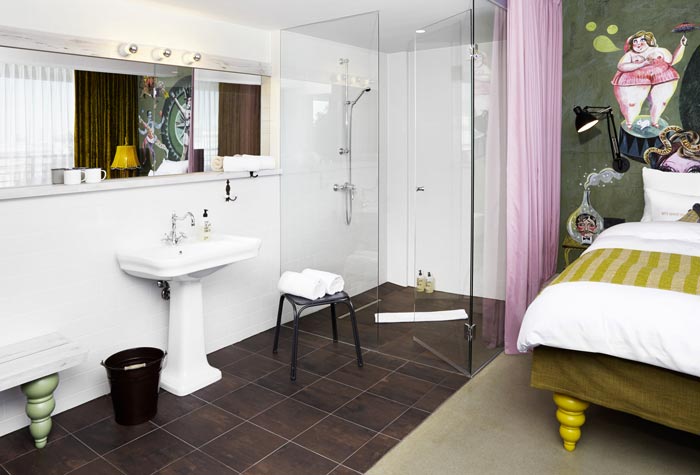 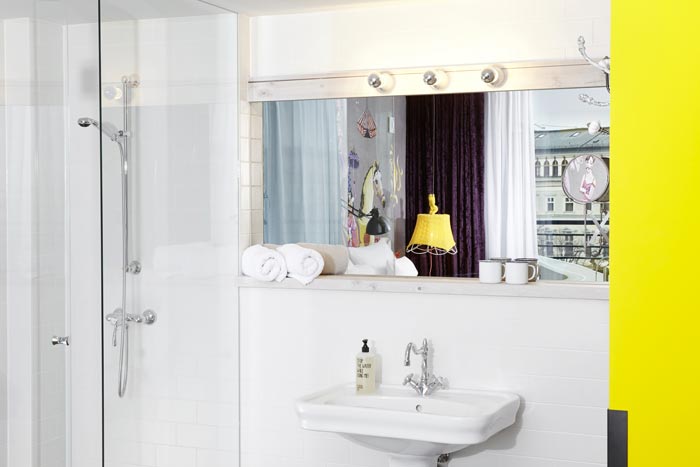 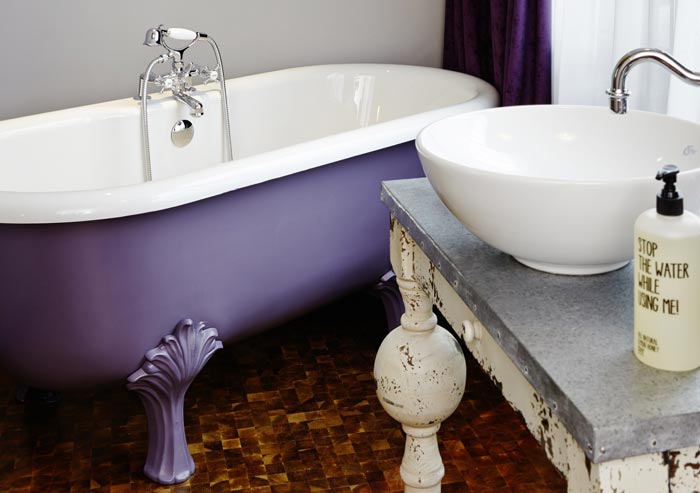 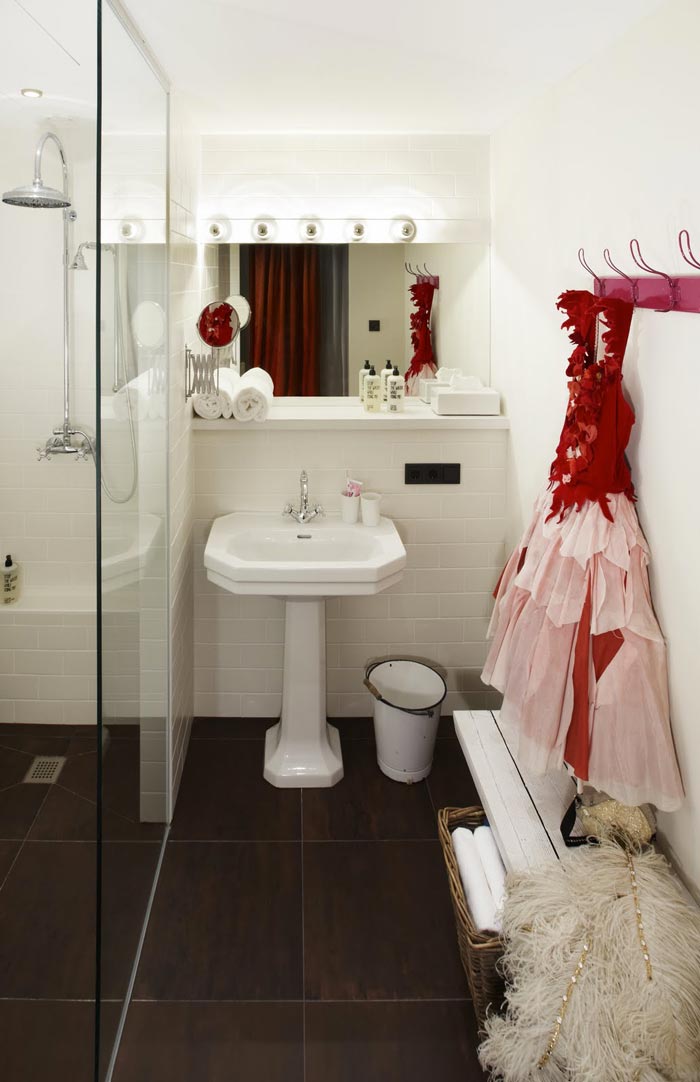 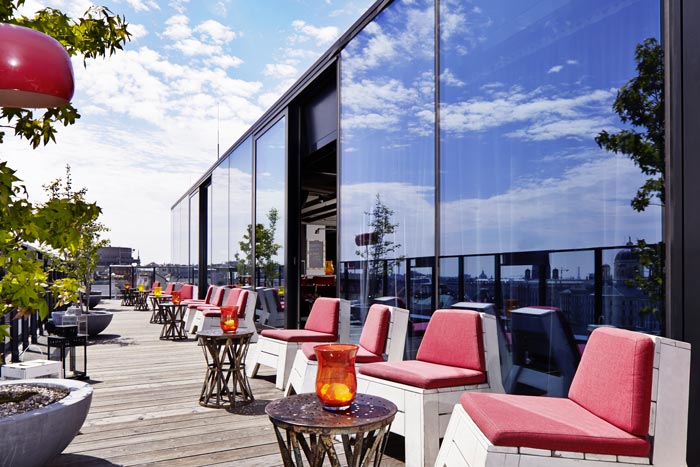 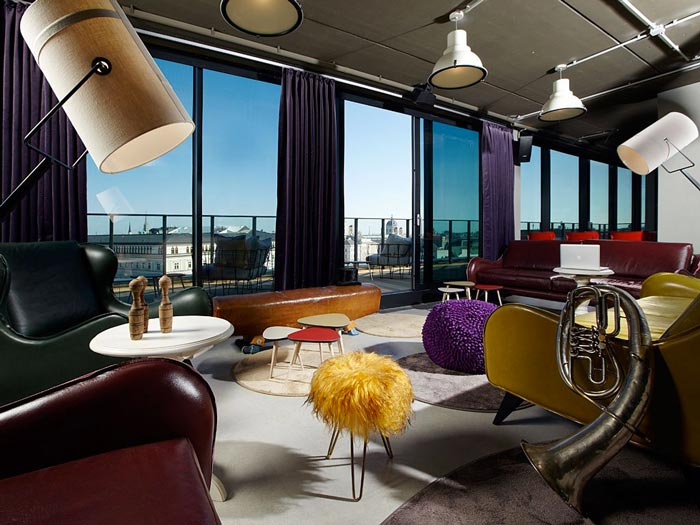 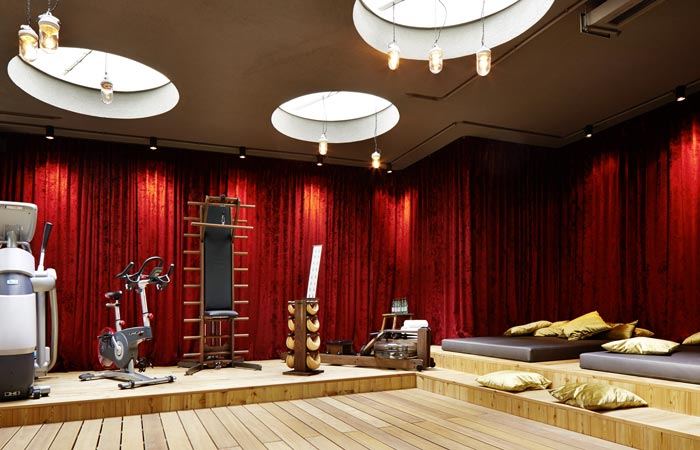 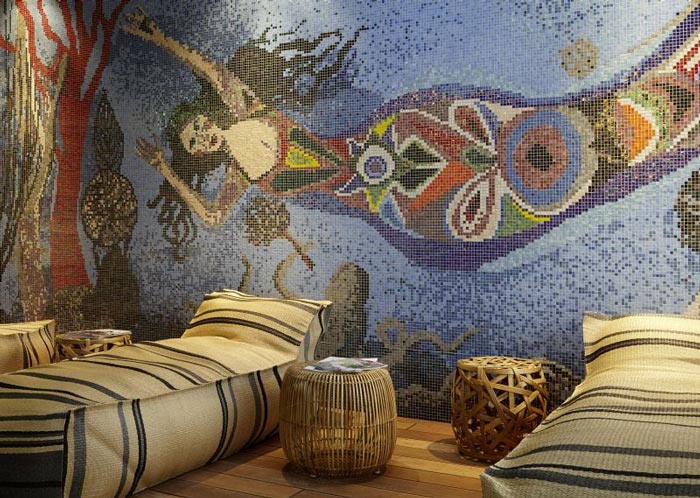 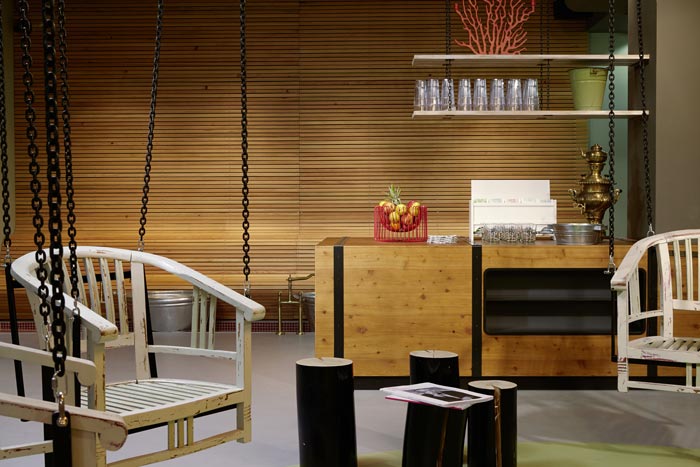 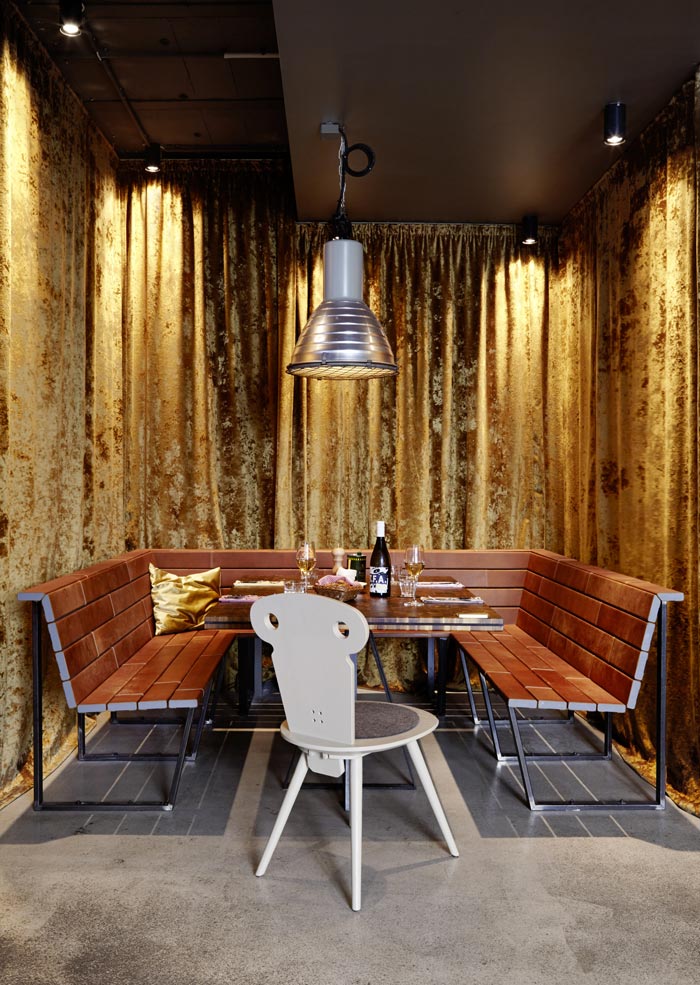 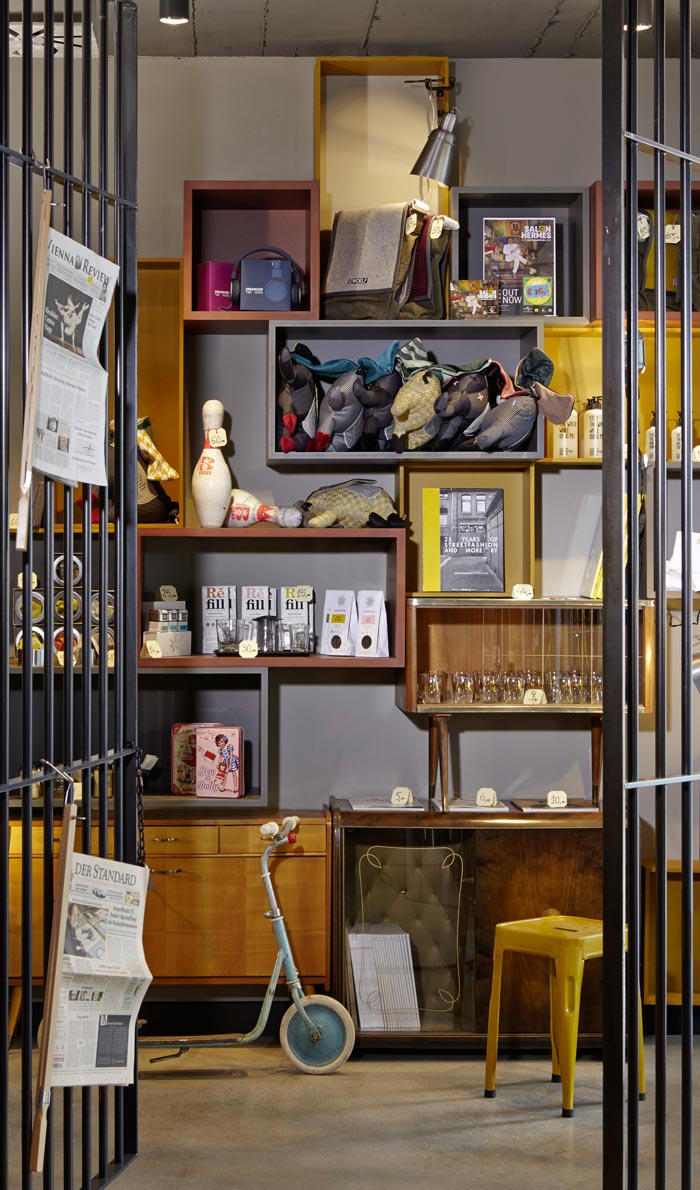 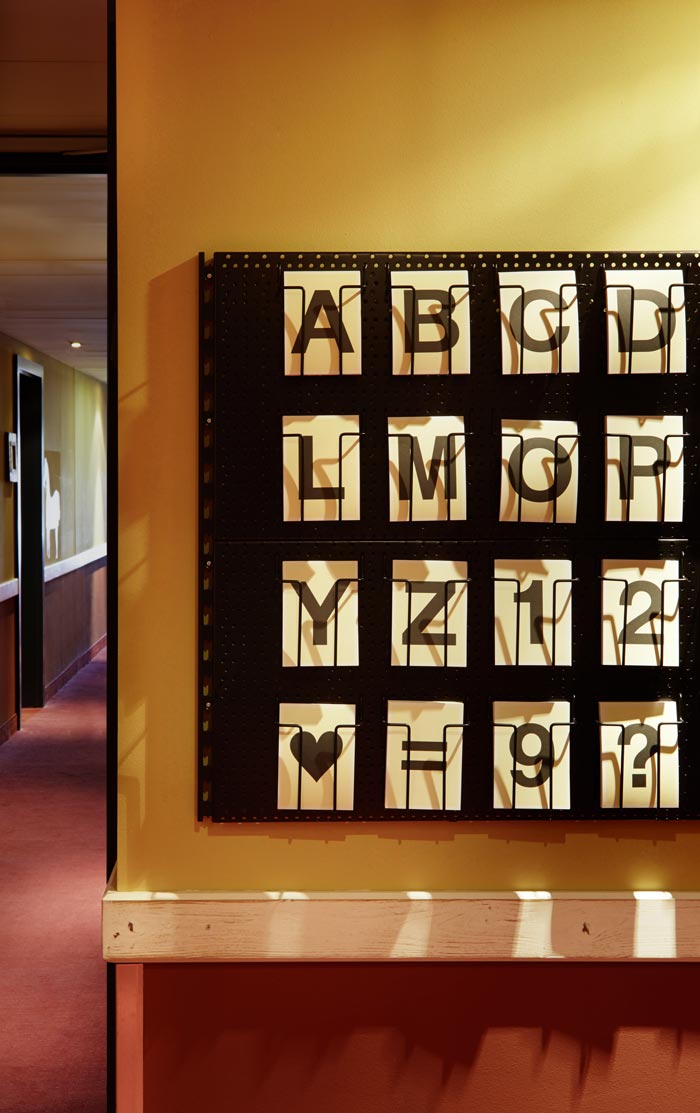