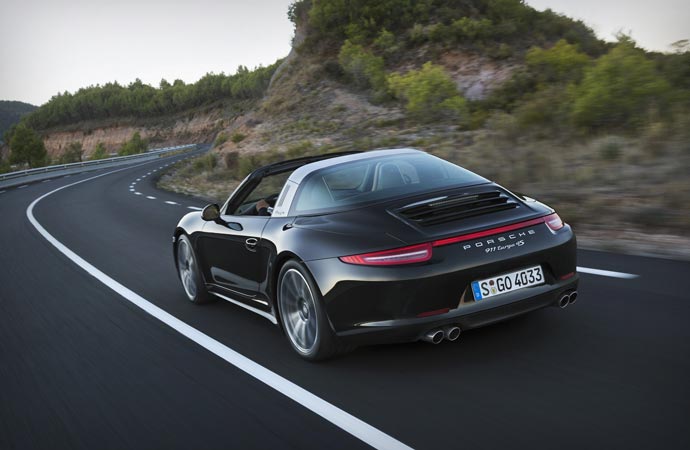 The Detroit Auto Show is a place every car freak has to visit. Many cars that have become classics saw the light of day here. Recently we talked about Toyota’s amazing concept named the FT-1, but there was not much information on the technical specifications. The Porsche’s new Targa model is a different story with almost everything known and ready for buyers.

The Targa models came out in 1965 as Porsche’s response to National Highway Traffic Safety Administration’s proposition to ban convertibles. This never happened, but the Targa became a classic, so antecedents were bound to come.

The latest one in the streak is just as a new Porsche should be – true to the original, but still contemporary and in accordance with current technical trends. This is basically a 911 half convertible. The differentiating feature is the roll bar resembling brushed metal hoop just behind the front seats. The roof panel gets removed in a dramatic performance that lifts the entire glass behind the front seats and hides the panel behind the rear ones at a press of a button. Rest of the car is very similar to a standard 911, but with enough hints to differentiate the two versions. 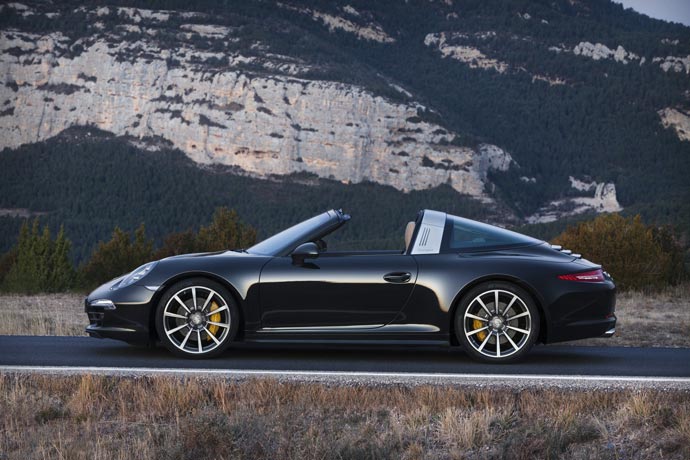 The interior is even more based in the coupe version. Here you will also find top materials such as leather and metal. The interior features a modern multimedia screen at the central console, as well as Porsche’s recognizable instrument panel and steering wheel. There is enough room to provide comfort at the front, but it is still evident that this is a non-compromising high-performance car. Various customization options can make your car look a lot different on the inside, but also raise the price significantly.

There are two engines available. The Targa 4 features a 3.4-liter boxer six-cylinder engine that kicks out 350 hp and 287 lb-ft of torque. The 4S packs a larger, 3.8 l six-cylinder boxer that produces 50 hp more than its weaker counterpart and 325 lb-ft of torque. Both can be paired either with a standard 7-speed manual or PDK automatic with dual clutch. The announced performances are in accordance with the brand name – with PDK and Sport Chrono Package the weaker version reaches 60 mph in 4.8 seconds and has the top speed of 174 (1 mph slower than with the manual), while the 4S drops another 0.6 seconds from the acceleration figure and reaches 183 mph.

While sports cars purists will love the option of a manual, they might resent the fact that there is only an all-wheel drive option and that the Porsche’s signature rear-engine-RWD setup lacks.

Coming with the starting MSRP of $102,595 for the Targa 4 and $117,195 for the Targa 4S (including destination fee), this car is sure to present relevant competition for the likes of Audi R8 Spyder and Jaguar F-Type. watch video below 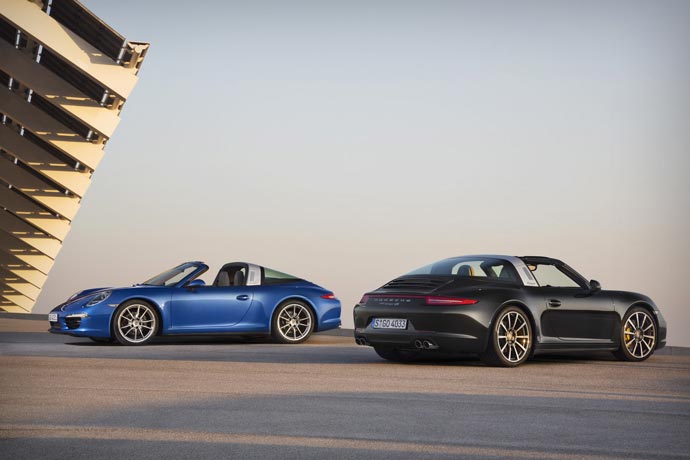 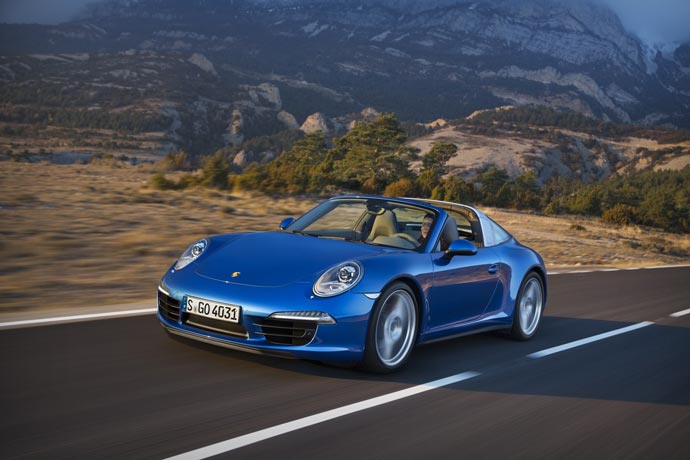 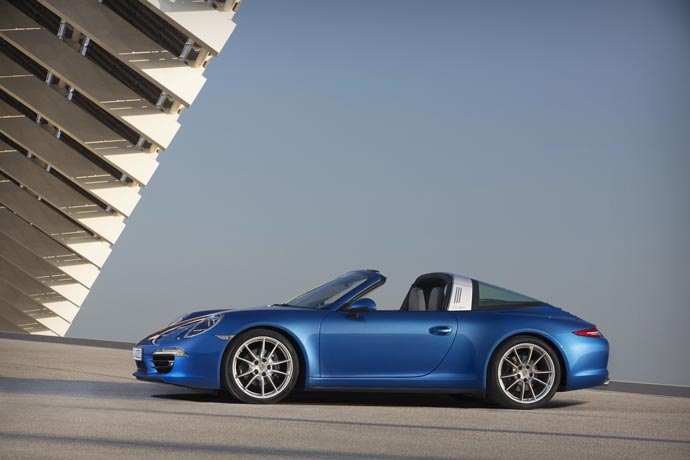 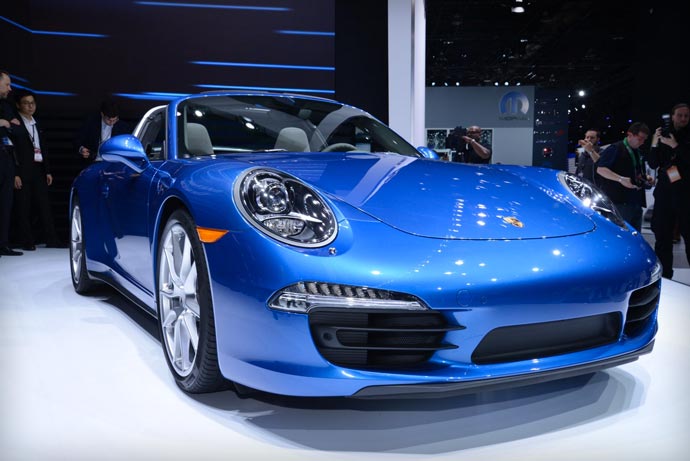 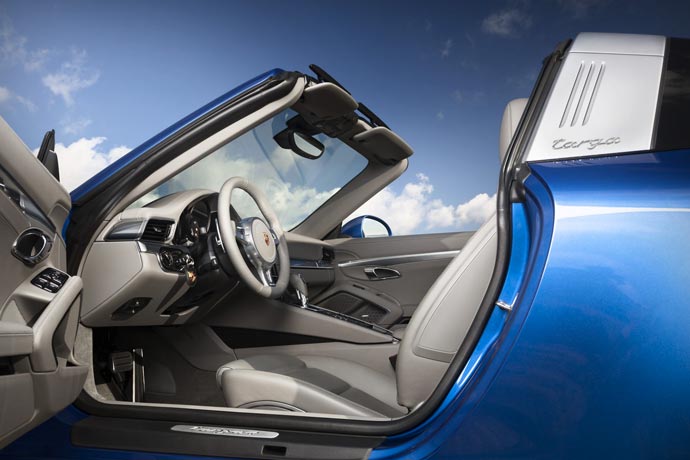 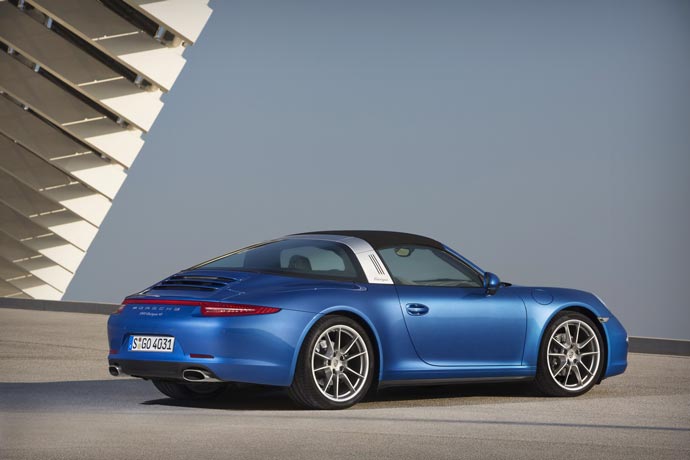