Is it a motorbike? Is it a car? Is it the latest super-vehicle about to hit the streets worldwide? Well, one thing is pretty damn sure – Spyder F3 is a stunning three-wheeler with a rather aggressive look and sturdy build that promises tons of high-speed fun. If you have ever had a chance to take a ride on a Can-Am all-terrain vehicle by Bombardier Recreational Products (BRP), you probably know what we’re talking about – and if you haven’t, scroll down for more info, and make sure you add this mean ride to your birthday wish list.

A cross-breed between a Miata and a Diavel, Spyder F3 is a three-wheeler that provides the reliable stability of a regular car while still allowing you to enjoy a hefty portion of a motorbike’s open-air cruising freedom. Coming from BRP as a brand well-known for their creative (some may call them even weird) takes on handlebar-based vehicles with passenger seats fitted at the rear (like the famous snowmobile and their previous personal watercraft models Ski-Doo and Sea-Doo), Can-Am Spyder F3 is the next step in the evolution of the original Spyder model designed especially for keen performance riders looking to take their ride to the next level. Like the previous models, the F3 preserves the unique Y-geometry while offering the thrill of a motorcycle combined with the convenience of a convertible. Nevertheless, unlike its predecessors RS and RT, Spyder F3 is relatively lighter and has a lower seat and gravity center. 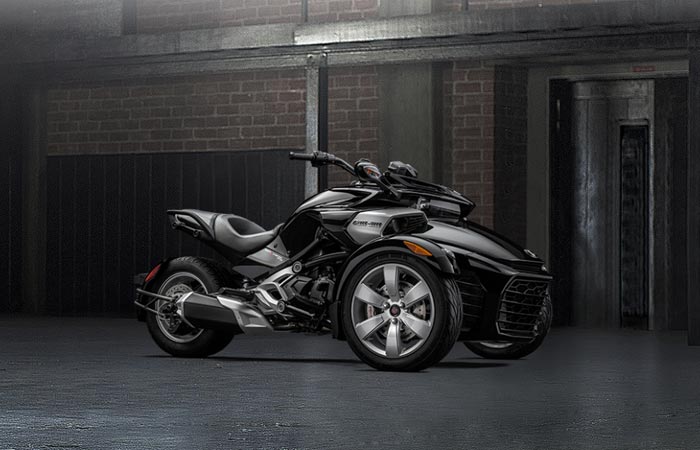 This mean personal transporter features a liquid-cooled 1330cc Rotax ACE engine with an in-line triple cylinder design with EFI which allows for a flat-lined low-end torque in any given gear, with total 115 horsepower-wise (7,250 rpm), 96 pound-feet of torque (5,000 rpm) and redline at around 8,0000 rpm. Impressive, yeah? Buckle up, because that’s just the beginning – believe it or not, the F3 can reportedly achieve max speeds of up to 252 miles on a single fill. Now that’s something to get your racing adrenaline pumping through your veins, ain’t it?

On top of the sophisticated Vehicle Stability System (VSS), the Spyder F3 boasts a convenient reverse at a simple press of a button and a ride-by-wire throttle found on the right side for smooth and gradual braking and power. The latest BRP Can-Am comes with either a six-speed semi-automatic or manual transmission (all six up for the auto transmission and five up, one down for the manual transmission). The front suspension is full-on, drawing on the suspension design found in four-wheel vehicles, with two front wheels sitting widely apart (double A arms fitted with Fox shocks are located on either side) fixed tight on the ends of an anti-roll torsion bar. The F3 rear suspension is a regular double-sided steel swing-arm with a Sachs single shock, while the frame is built from stamped steel with beefy cradles at either side. On both sides, Spyder F3 has upper and lower tube frame members for 40% higher torsional stability in the chassis. The Rotax engine is attached only to the lower frame member, while belt is used for the final drive. 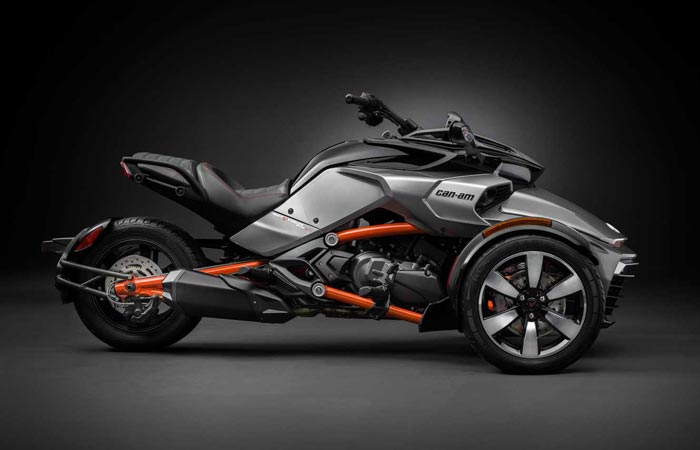 In order to steer the latest BRP Can-Am, the rider relies on the handlebar fixed to the variable-assisted power steering box found at the bottom of the shaft, while braking is handled by three discs (two front and one rear) controlled by the rider’s right foot. The antilock braking system (ABS) fitted in the F3 comes from Bosch, while the brake calipers are produced by Brembo. Furthermore, the F3 seat is set to 26.6 inches for optimum stability and low center of gravity, the aluminum 6-spoke 15 x 5-inch rims are shod in KR31 165/55R-15 tires and the 15 x 7-inch aluminum rear rim sports a KR21 225/50R-15 tire. Sizing 104 x 58.9 x 43.3 inches (L x W x H), the F3 boasts 458 pounds of maximum load and the total dry weight of the vehicle adds up to 850 pounds. And though F3 comes with no bags on the side, it sports a relatively spacious trunk up front (6.5 gallons) so you can pack your helmet, shopping bag, backpack or small laptop as you’re preparing to hit the road. According to first reports, Spyder F3 is extremely easy to steer, it’s also super-tight lock-to-lock and is said to be unbelievably smooth to ride, but it is radically different from a conventional motorbike in that it demands the rider to lean into the turn as the F3 leans from the turn (i.e. to push on the outer and not the inner peg in turns), so that nasty corner turns are handled by bending in slightly late and firmly to pull the weight up onto the outer part of the front wheel, which allows the rear to sling around quickly and early finish the twist. 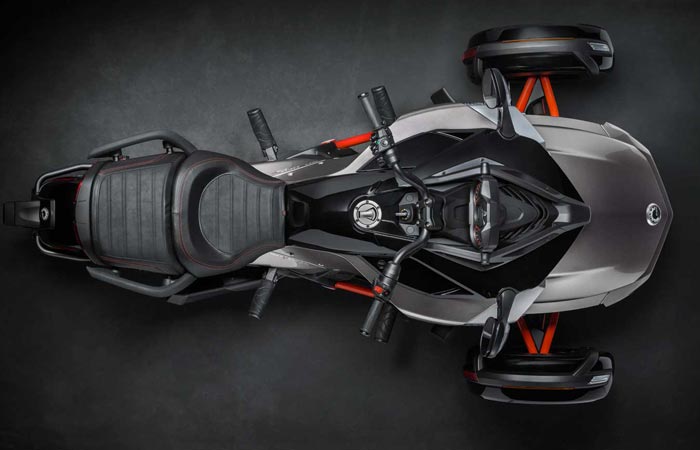 Fuel-wise, Spyder F3 can take in up to 7.1 gallons of premium unleaded gasoline (with 1.2 gallons of reserve) which translates as plenty miles to ride before you need a refill. Available in two different models (F3 and the slightly pricier F3-S that goes at $20,999 and up), the latest BRP Can-Am comes with a revamped trim package, premium front fenders with LED lights, electronic cruise control, black suede seat with red stitching and ‘machined’ black wheels. And while Spyder F3 is available in either black or white, the F3-S comes in several color combos, including all-black, white/black, red/black or magnesium metallic/black so you can pick your favorite shade of velocity. As far as the extras go, you can choose between four different handle lengths and throw in an add-on windscreen, special seat, lighting, saddlebags, floorboards, detachable backrests, wheels and even an Akrapovic silencer.

So, are you ready for a completely new riding experience? The new BRP Spyder F3 is here to teach you how to really make your life worth the thrill, so make sure you have a go at it as soon as possible – you only live once, after all. watch video below