If you like whiskey and are tired of some critics talking down to you because of it, prepare to respond in the best possible manner – scientific proof. Whiskey is much more healthy than those people can imagine, and you will be able to prove it. Read on and discover the surprising health benefits of your favorite drink and remember – all is good when it is taken in moderation.

But first – a little background 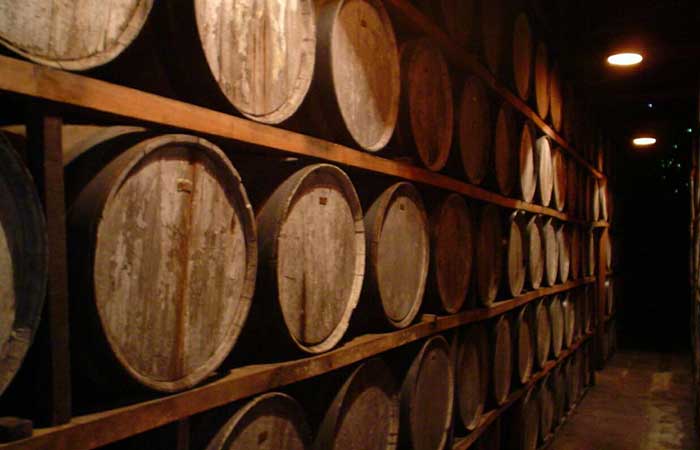 Whiskey is a distilled alcoholic drink which is made from fermented grain mash. This mash differs from one to another kind, but usually the ingredients are wheat, rye and corn. When it comes to its historical background, there are stories on Wikipedia that it was first consumed in Mesopotamia in the 2nd millennium BC! It is a fact, though, that its first appearance in Scotland was in the end of the 15th century, and up until today, it is one of the most praised drinks in the world. And, as you surely know, it is usually considered “a man’s drink” (even though more and more ladies start enjoying it too – smart choice).

When it comes to its health benefits, here they are… 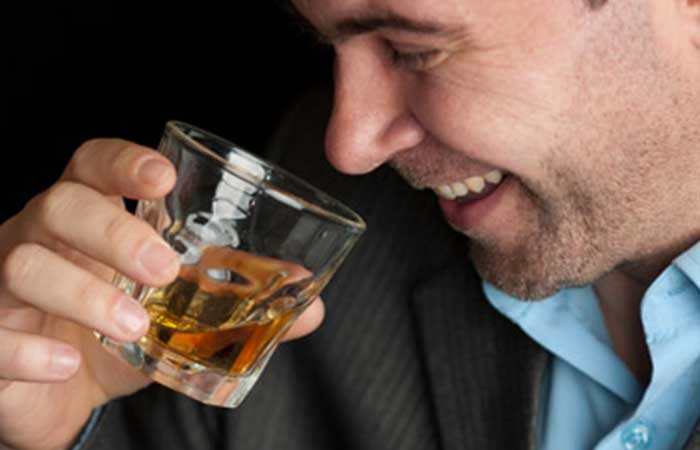 Have a sip of whiskey to relax after a stressful day.

We all know that stress is the source of many diseases known to men nowadays – it is actually one of the biggest problems of humankind. Well, take a glass of whiskey and watch your stress slowly but surely go away. This may seem obvious since it is, after all, an alcoholic beverage, but what whiskey actually does is increase your blood circulation and at the same time slow down your brain. This is a winning combination and it will help you relax and put your problems aside, at least for a little while. Just don’t overdo it because you may end up having a really stressful morning filled with migraines. 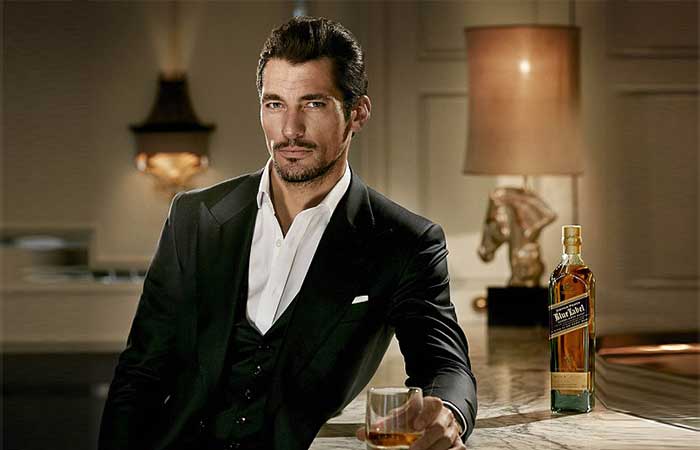 Ladies always prefer a fit gentleman drinking whiskey to a fatso with a glass of beer. (photo credits)

In addition to helping you get rid of stress, drinking whiskey can also help you get rid of weight. Unlike some other alcoholic beverages, like beer, for example, whiskey is a low-calorie drink and it is free of fats and cholesterol. This means that instead of drinking cocktails, wine and the like, you can choose a true man’s drink and enjoy it without developing a “beer belly”. Plus, the ladies prefer seeing a classy gentleman with a glass of whiskey on the rocks to a fatso holding a big glass of beer. The later reminds them too much of Homer Simpson – and there is absolutely nothing sexy about Homer Simpson. 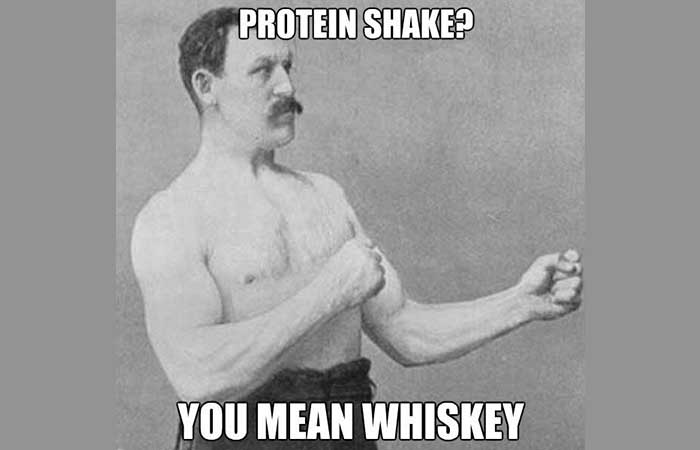 As you can see, there are many benefits to drinking whiskey. Just keep in mind, when we say drink – we mean drink in moderation. Getting drunk every day won’t help boost your immune system, but an occasional glass of this drink may, they say on OrganicFacts. There were several studies concerning this and though they were pretty inconclusive, they did show that there are traces of vitamins and antioxidants. They can help you fight some minor diseases like cold or small infections. Your grandparents may tell you to pour some whiskey on a wound and, surprisingly, they would not be wrong. Whiskey will successfully disinfect your wound and help it heal more quickly. 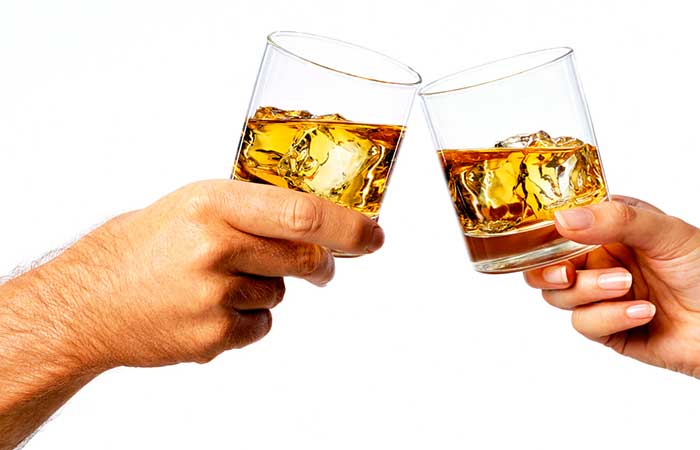 Cheers to having great memory thanks to whiskey! (photo credits)

Admit it: the more you read, the more you like this drink! In addition to all of the above, it will also help you have a clearer head and a better memory. Although many of us connect alcoholic beverages with “holes” in memory and sleepless nights, whiskey is very special when it comes to this. While fastening your circulation, whiskey ensures that your brain will get enough blood and when it does, it is pretty logical that it will work better. So, if you need to make sure to remember an important thing, just drink a little whiskey and you shouldn’t have any issues with that. Just remember, the key word is “little”. Simple, right? 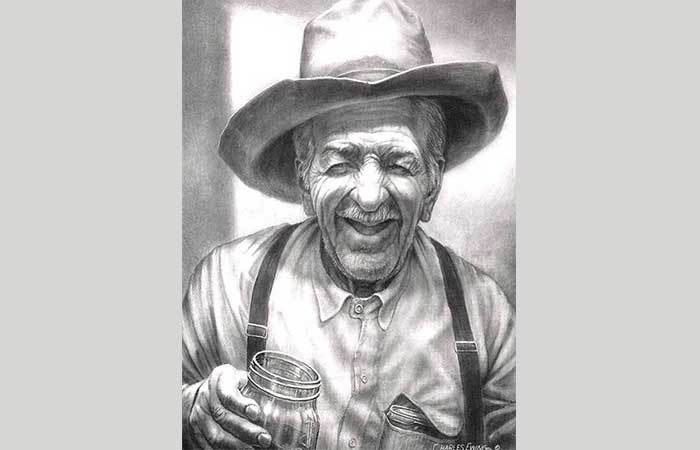 Have a sharp mind even in old age.

In addition to boosting your brain activity and memory, whiskey also lowers the risk of Alzheimer’s disease and dementia, according to Lifehack. One of its components, ellagic acid, is proven to be very successful at fighting the free radicals in your body and therefore preventing two major diseases of today’s world. It does sound pretty crazy when you say that drinking alcohol will make your organism function better, but in this article we have already proven that whiskey is anything but an ordinary alcoholic drink. We could even go as far as saying that whiskey is your new best friend, so to say. 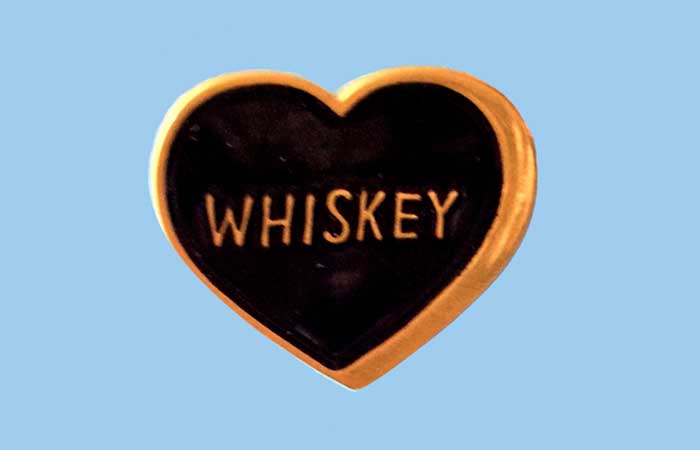 Show your heart some love by drinking whiskey.

Believe it or not, studies have shown that those who drink moderate amounts of whiskey on a regular basis have up to 50 percent lower risk of heart attack and stroke! It turns out that, like dark beers and wine, whiskey has the antioxidants that can lower bad cholesterol and even boost the good cholesterol. By doing that, it helps your heart function much better even in older age. So, instead of saying that “an apple a day keeps the doctor away”, you can also say that a glass of whiskey a day does the same thing. And who eats apples when they can have this marvelous drink and have the same effect? 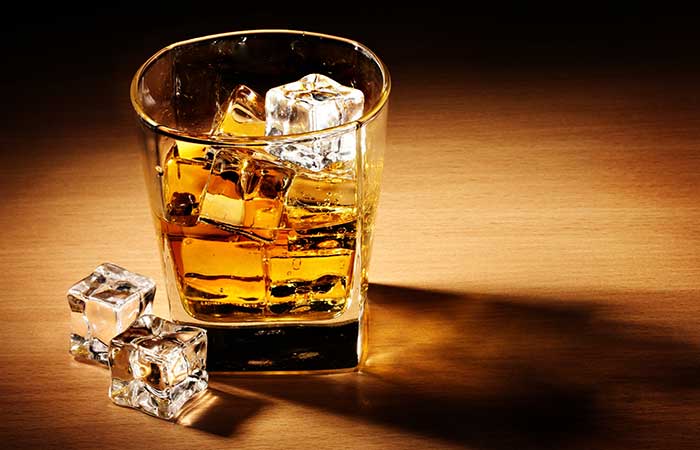 When it comes to heart diseases, it is not only the heart attack that you can prevent. While blood clots are a good thing when they happen on the outside, when you have an external injury, for example, they can be fatal if they start forming on the inside. It can disrupt your organ functioning and bring many disastrous scenarios – but you don’t need to think about that. Whiskey also helps prevent blood clots, by making your blood thinner, thus reducing your chances of getting atherosclerosis and thrombosis, as well as heart attack or stroke. 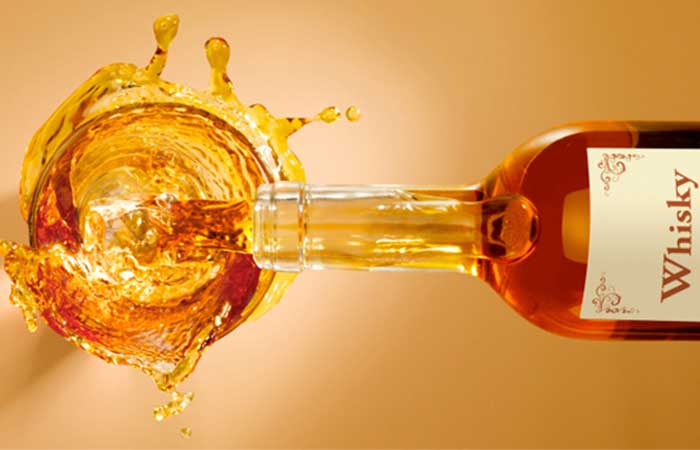 Dear diabetics, pour yourselves a glass of whiskey. (photo credits)

Drinking whiskey is proven to lower the risk of developing diabetes by almost 40 percent! And, great news for those of you who suffer from high blood sugar – since it is carb-free, it is probably the safest alcoholic drink you could choose. Of course, it goes without saying that you should be extra careful about it and don’t overdo it, and always talk to your doctor before deciding to go out and have some fun with it. And, if you decide to go for it, never do it on an empty stomach! 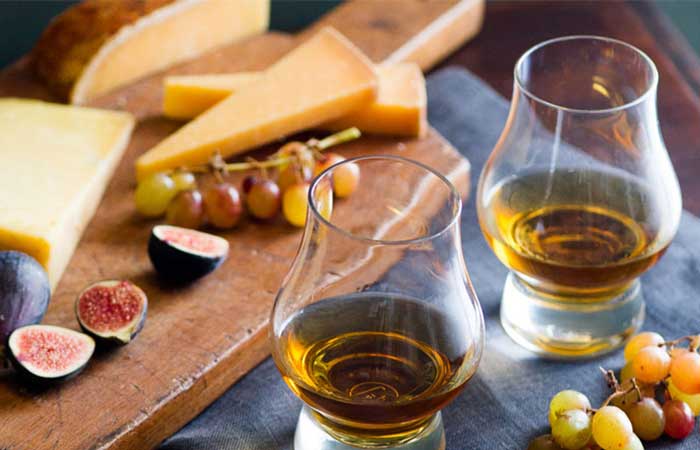 Whiskey with lunch is a winning combination. (photo credits)

Whiskey has been a widely used digestion aid since forever, and there is a good reason for this. Thanks to its high alcohol percentage it is a very good solution for your stomach problems. Take a glass after lunch and it will curb your appetite, prevent you from eating more than you need (hence the weight loss from the beginning of the article) and make it much easier to digest what you just ate. If you never want to have another stomach ache ruin a great meal, why not make the meal better to begin with by adding some whiskey to it? It seems that with this drink you just cannot go wrong. 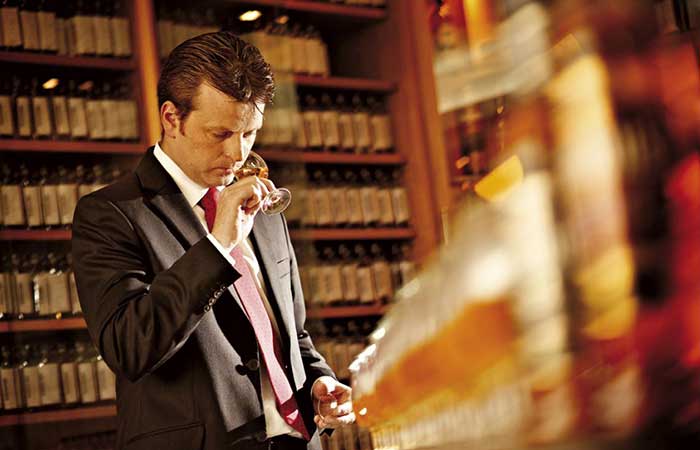 One of the most malicious diseases of today – cancer – often cannot be completely cured, but there are many proven methods of lowering the risk of getting it or even preventing it. As you may have already guessed, drinking whiskey is one of them. It is a similar process to the one that helps prevent dementia and Alzheimer’s disease – the ellagic acid that is in the drink destroys the free radicals that are a known cause of cancer. This way, by drinking, say, a glass of whiskey every once in a while, you will lower your chances of getting cancer – it is definitely worth it. And it tastes good, too. 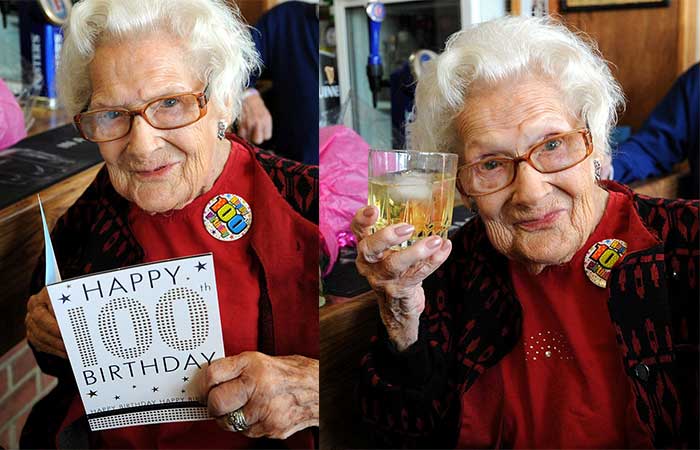 This old lady claims that one of the secrets to her long lifespan is whiskey. (photo credits)

From what researchers show, whiskey is almost like the nectar of gods. Not only does it cure minor diseases and infections, this magical drink will also lower the risks of some major illnesses like dementia and cancer. The conclusion is pretty obvious: drink whiskey and it will help you live longer. It is filled with nutrients and antioxidants and by boosting your immune system, preventing and curing diseases – it will lengthen your life. And what a happy life it will be! 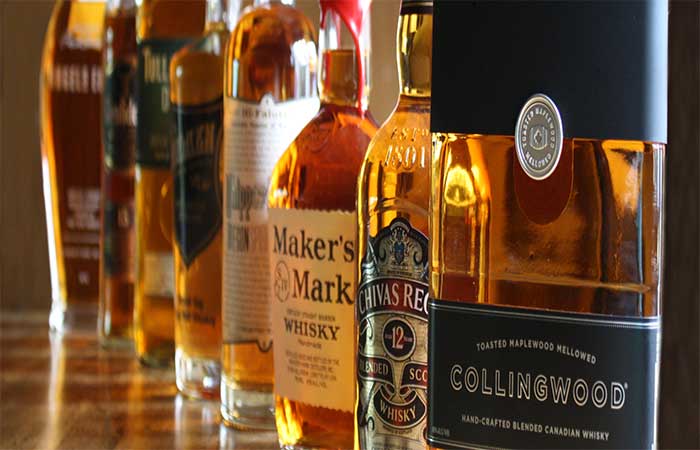 Bear in mind, all of the above is possible and most of it has even been scientifically proven, but it is not an excuse to overdrink – just the opposite. Drinking too much whiskey, or any other drink, will do many things to you, but it will hardly boost your health. So, in this matter, like in life itself, moderation is the key. It is not a good idea to drink a little every day either – this will increase your tolerance and can eventually lead to alcoholism. Remember, alcoholism is also one of the most common diseases of today, and it will diminish all the good sides of this drink.